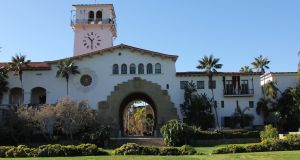 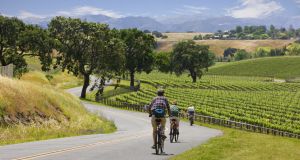 Santa Barbara: there are more than 100 wineries surrounding the area

In Race of a Lifetime, Mark Halperin’s and John Heileman’s account of the 2008 US presidential elections, the story is told of how the McCain campaign toyed with the idea of casting rival candidate Barack Obama as an out-of-touch celebrity, “like Oprah Winfrey or Britney Spears”. But campaign manager Steve Schmidt was having none of it. “Don’t politicise Oprah,” he warned, “She’s more powerful than you can comprehend, like Obi-Wan Kenobi.”

The Jedi Master of daytime TV lives on a 40-acre spread in Montecito, an exclusive suburb of Santa Barbara that is one of the world’s priciest postcodes. Less than 150km north of Los Angeles, this is a seaside Shangri-La where Beverly Hills types move to upscale.

Santa Barbara sits on a narrow shelf of coastline backing up onto the Santa Ynez Mountains known as the American Riviera. For more than a century, it has welcomed wealthy refugees from urban America with most of the same pleasures afforded its original French counterpart. The locals all have that healthy glow that results from earning plenty, eating well and treading nature’s abundant bounty on a bike, boat or in a fancy pair of trainers.

Santa Barbara was founded in the late 18th-century as a Spanish mission town, and the original architecture of white stucco buildings topped with red-tiled roofs has been protected by strict preservation codes. Looking over the town is the original Franciscan mission, which is one of the big visitor highlights, but it’s the eerie graveyard attached to the church that is the most notable. Here, sheltered under the branches of a huge Moreton Bay fig tree, are the remains of 4,000 largely forgotten Chumash people who died under the protective zeal of the local monks.

When they weren’t imposing Christianity on the natives, the Franciscan monks were keen viticulturists, and their efforts have left a more tangible legacy: Santa Barbara is one of California’s top wine-producing regions and the city has a near-religious devotion to good food and wine.

“Dude, this is the greatest place on earth!” I’m sitting at an outdoor table, tucking into a salad of baby kale, avocado, dates and roasted almonds, all locally grown, of course. The guy sitting at the table next to me – perfect abs, ultra-white smile – is thrilled when I tell him I’m just visiting for a few days.

“Man! It’s so cool that you get to travel to places like this. You should stick around a while.” Because this is California and not the south of France, the preening smugness that comes with living la dolce vita is offset by a casual, friendly charm that both disarms me and makes me resentful I can’t stick around for any more than a few days.

What makes it worse is that all this privilege comes with a conscience, especially in relation to the environment. Almost everything comes with an eco prefix, from car-free initiatives to the enthusiastic embrace of the locavore movement.

Food and its provenance are inexhaustible topics of conversation, which at first I dismiss as elitist and narcissistic, but the food is just so damn good, whatever the price bracket. Even the city’s homeless population get to share in the bounty, fed by an organic soup kitchen whose guiding principle (and website tagline) is “humanity can heal itself when offered a foundation of nutrition and compassion.”

The city’s commitment to Mother Earth is clearest in the Funk Zone, an indie heartland south of State Street, on the beach side of town. Terrible name, terrific neighbourhood: full of craftspeople, artists, surfers and slackers living in rent-controlled splendour on broad, tree-lined streets where a starter home now costs around a million dollars. It’s the price of living in a neighbourhood where most of the businesses are locally owned and there’s ne’er a big-name coffee conglomerate to be seen.

It’s also where I’m introduced to Santa Barbara’s wine culture. There are 36 tasting rooms spread about town, representing the more than 100 wineries in the hills. In the Funk Zone, I find a couple of growers with attitude, wine punks such as Seth Kunin, whose Valley Project serves cool, affordable wines to hipster geeks while dispensing with the pretentious vocabulary.

In This is How We Do, Katy Perry sings about grabbing tacos and checking out hotties at La Super Rica Taqueria, a brightly painted taco shack on Milpas Street, Santa Barbara’s Mexican food neighbourhood. But she’s only namechecking the place because Julia Child, the goddess of French gastronomy in America (and onetime Santa Barbara resident), gave the place the thumbs up on Good Morning America in 1996. Local foodies will scoff and say there’s far better to be had even within sight of here, but the queues for a Super Rica taco still go round the block.

Locals may quibble over who serves the most authentic tacos, but Santa Barbara’s culinary Darwinism means that chefs either excel or die. And so you get Italian sashimi at trendy spots like Olio Crudo and Santa Maria-style pinquito beans at Barbareño, where not only is all the produce local, but every dish on the menu is specific to the Santa Barbara area. They also serve a version of an Egg McMuffin (made with a cured egg, Seascape cheese and locally sourced speck) because – fun fact – fast food’s best-known breakfast treat was first introduced in the McDonald’s on North Milpas St in 1972, by Santa Barbara resident (and franchise owner) Herb Peterson.

Downtown has a broad choice of good places to stay, including the upscale Canary, a five-star hotel just off State Street, with a terrific location, four-poster beds and a roof terrace, but the truly extravagant properties are on the edge of town, usually perched up in the hills with views of the ocean.

One of the region’s most famous lodgings is the Spanish Colonial Revival-style Biltmore. Guests can use the adjoining Coral Casino Beach & Cabana Pool Club, where membership costs a cool $240,000.

My choice is the Belmond El Encanto, a seven-acre dreamland of California Craftsman-style bungalows, eucalyptus trees and sweeping views of Santa Barbara and the ocean.

And then, far too soon, I have to leave. It was my first visit to Santa Barbara and I was expecting either an elitist playground bleached out by too much sunshine and self-congratulation or a boring retirement community for the mega-wealthy. Santa Barbara has plenty of wealthy people, and it’s definitely aware of the envy it engenders, but it’s beautiful and friendly and I really didn’t want to leave.

GETTING THERE: Ethiopian Airlines (ethiopianairlines.com) flies direct to Los Angeles from Dublin on Mondays, Thursdays and Saturdays, from €490 return, including a baggage allowance of 2 x 23kg bags