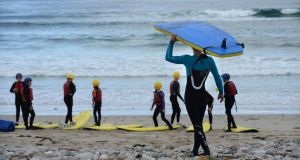 Weather warnings of high seas and strong winds didn’t deter the community of the northwest Mayo outpost of Erris from celebrating its Irish Times Best Place to Go Wild in Ireland at the weekend.

Hundreds of people gathered in Erris as 22 local business people showcased their tourism initiatives to the backdrop of the traditional and bluegrass riffs of local band Wildlife.

The Best Place to Go Wild in Ireland was a 32-county competition run by The Irish Times in 2014, to recognise the country’s best natural environments and outdoor experiences. The district of Erris, in northwest Co Mayo, was announced as the winner of the contest in June 2014, and the award was officially presented at the weekend.

This was the third such competition run by The Irish Times. In 2012, Westport, Co Mayo, was named the Best Place to Live in Ireland; and in 2013 Loop Head peninsula in Co Clare was named Best Place to Holiday in Ireland.

For Laurence Howard, the award “has shone a light on the whole of Erris”. He returned home recently from Saudi Arabia, where he worked on a farm with 22,500 cattle. On a stand with his father, also Laurence, they were promoting their tourism business situated on tiny Claggan Island, which is connected to the mainland by a causeway. It encompasses self-catering accommodation at the renovated Belmullet Coastguard Station and some recently acquired glamping pods as well as traditional B&B.

“We’ve all known about the natural beauty of Erris but it was unknown to the rest of the world. Everyone had heard of Westport but this brings the visitor one step further. The people of Erris have kept in touch with the true meaning of the “Céad Míle Fáilte” and know that it is all about giving and taking,” he said.

Westport won the Irish Times award as The Best Place to Live in Ireland in 2013.

For local Sinn Féin Cllr Rose Conway-Walsh “the award puts Erris at the centre of the Wild Atlantic Way”.

“Many people, even from Co Mayo have come to Erris for the first time since the award was announced last summer and they are so surprised at the unspoiled beauty,” Cllr Conway-Walsh said.

Geraldine Padden of Iorras Domhnann, a community employment scheme that supplies workers for many of the tourism projects, echoed Ms Conway-Walsh’s view. She said the award had “lit a fire in people to come and see the wild, unspoiled and rough beauty of the area”.

Accepting the award, Rina Garrett, the tourism development officer of Erris Beo, said the award has “ really put Erris on the map”.

Speaking on behalf of The Irish Times, Conor Goodman, features editor, said: “There are always those who want to fill an area with tour buses, But the community are the custodians of the landscape and the environment, and the people who make visitors either feel at home or feel unwelcome. And it’s very easy to feel welcome here.”

Mayo County Council’s chief executive, Peter Hynes said that since the county had won the two Irish Times Best Place awards: “Mayo is now officially the best”. “This is a celebration of one of Ireland’s, if not the world’s, best kept secrets,” he said.

Officiating, Minister for State, Michael Ring said: “I do be telling them all the time in Dublin that there are other parts of Ireland and now they are discovering there is a Mayo and an Erris …. The Wild Atlantic Way (WWW) is one of the best initiatives that has been put in place and I can assure you thousands of visitors will come into Erris because of it. We didn’t have to put any infrastructure in place; all we had to do was put up some signage and now the Wild Atlantic Way will invigorate the whole tourism industry.”

A 2015 Irish Times competition will be announced in April.

What sold for about €385,000 in Kilmainham, Glenageary, Howth and Beaumont?
9