Irish hotel named best in the world by Condé Nast 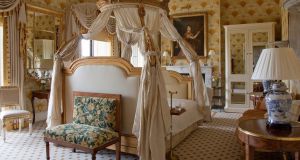 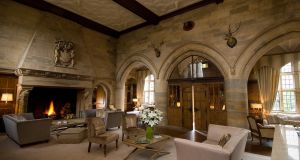 Waterford Castle: No 7 on Condé Nast list of top 50 hotels in the world 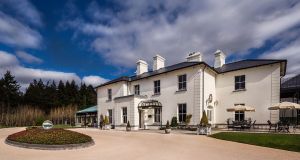 The Lodge at Ashford Castle, Co Mayo: No 9 on Condé Nast list

The annual awards ranks the best hotels, resorts, cities, islands, airline and cruise lines in the world. The results were compiled from more than 300,000 readers’ votes. No other country had more than one entry in the top 10.

Set in the foothills of the Slieve Bloom mountains outside Portlaoise, Ballyfin opened as a country house hotel after eight years of renovations in 2011. The Regency mansion is situated in a 614-acre estate and has just 20 bedrooms. The luxurious five-star hideaway has won numerous awards and Condé Nast readers gave it a score of 99.11.

The hotel shared the news on their Facebook page, saying: “It has been a fantastic week for us. Conde Nast have awarded us #1 Best Hotel in the World - Thank you to Condé Nast, the readers, our guests and our amazing team at Ballyfin.”

Damien Bastiat, Ballyfin general manager, said the award was a “fantastic achievement for the team and further establishes Ireland as a worldwide holiday destination”.

Perhaps the hotel’s most high-profile guests in recent months were Kim Kardashian and Kanye West , who honeymooned there in May.

Waterford Castle Hotel and Golf Resort was sold for €6.3 million in 2015 to Seamus Walsh, a Waterford-born businessman who has lived in Australia for 30 years.

“It was fantastic news to hear we have featured on the Condé Nast best hotels in the world, and great recognition for our owner, Seamus Walsh,” said Bernadette Walsh of Waterford Castle.

She said Mr Walsh has invested heavily in the 19-bedroom complex. “The castle has had a complete renovation and improvements had been made to the golf club and a golf performance centre has been added. More improvements are planned for next winter.”

Wedding business from the US is growing and “people seem to like the idea of coming to a castle on an island in Ireland”. Weddings in the past year from the US accounted for more than 20 per cent of business, said Ms Walsh.

Waterford Castle Hotel & Golf Resort are SO honoured to be chosen as the 7th Of The 50 Best Hotels in The World... https://t.co/Lp1y9ZomMs

Niall Rochford, general manager of Ashford and the Lodge at Ashford, said the hotel was delighted with being included on the Condé Nast list.

“The Lodge is coming out of the shadows of Ashford and we are seeing a big increase in guests from the US. Huge investment has been made this year and this is great recognition for the investment by the Tollman family over the past three years” .

Ashford Castle featured in a separate list in the awards – it was voted number five in the Top Resort in Europe category.

What Condé Nast said about the three hotels

If you’ve ever dreamed of summering at a country house, you couldn’t do much better than this stately, 20-room Georgian home, about an hour and a half north of Dublin. Beyond the regal four-poster canopy beds, gilded mirrors, and richly textured wallpapers, there are 614 acres of secluded private gardens begging to be strolled. But the real highlight? Having a butler row you out on the lake before enjoying a sumptuous lunch at the picnic house.

The ivy climbing the turreted stone walls of this stately 16th-century castle should be your first clue that you’re in for a royal treat—that, in addition to the patterned brocade curtains, intricate wall tapestries, and refined Irish classics (caviar-topped smoked haddock, anyone?) at the Michelin-starred Munster Room. Did we mention Waterford sits on its own, 310-acre private island?

The Lodge at Ashford Castle

This County Mayo castle on Lake Corrib may date back to the Middle Ages, but don’t go expecting a fusty, old-fashioned experience: 2015 saw a $75 million renovation of the 13th-century estate, which allowed for such add-ons as a cinema, cigar room, billiard room, and dine-in wine cellars. Take the Cranki, the hotel’s 40-foot luxury Italian yacht, out on the river with seven of your closest friends.

‘Game changer’: Could a €300 voucher transform the lives of Irish children?
2

Lockdown was hard, but it kept us closer to each other than we’ve ever been
3