Stephen Mangan’s Mayo is a wild escape from London 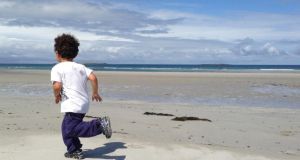 I spent most of my childhood summers and several of my Christmases in Erris. My parents came from two villages there, Geesala and Doohoma, across the water from Achill Island. In their teens they followed a well-worn passage to London to look for work.

Though I was born in London I see myself as both Irish and English, and am proud to be from Mayo and not just a suburb of north London.

For holidays we’d take the ferry over (nine hours) then drive from Dublin (six hours), stopping at the Longford Arms on the way, always the Longford Arms. The sense of remoteness sets in as you’re crossing the bog to Belmullet; it puts you in a desolate, melancholy mood. Then all of a sudden the ocean hits you, and it completely transforms.

As a child I looked at Erris just as a place where all my cousins lived. Sometimes I’d be left there for the whole summer, getting a lift back to London with the last aunt or uncle who was leaving. Now I see it differently. As an adult you appreciate the beauty and uniqueness of the place. It’s not on the way to anywhere. There’s no passing trade. Nobody goes there by accident. And that gives it a character all its own.

Erris is not as famous as Connemara or Killarney and hasn’t traditionally been seen as a tourist destination. It has woken up to its tourist potential only in the past 10 years, so it still feels like a discovery. You feel you have come to the edge of Europe, and you have.

On one visit a few years ago I bought a satnav, because we were planning to drive down the coast a bit. As soon as I passed Ballina the satnav just stopped working: the road disappeared from the screen.

Erris is no longer a two-day trek away. Knock Airport changed that, and now I get over at least once a year. I took my two young boys, who are four and seven, there for the first time last summer, and I watched them having the same experience I had as a young boy.

I have three uncles and one cousin there permanently, and a lot who live in Dublin come down for holidays too. When I was there last, there were 15 little kids running around in a pack, just like we used to.

We live in London with a garden the size of a kitchen table. It’s quite an experience to go from that to a beach two miles long with one other person on it, with deafening surf pounding away beside you.

I always stay with family, but Belmullet now has two excellent hotels, so you can bring people to stay. I’ve brought many mates there over the years, often to play Carne Golf Links, which is world-class.

What are the best things to do there? Well, start by going outside. Hit the beaches, on both the Atlantic and the bay sides. Get some bodyboards, and put wetsuits on the kids. Explore the dunes. I’m not a natural surfer, but other watersports, such as kitesurfing, are well worth trying.

The Kilmore Triathlon Club has a really tough triathlon, the Blacksod Point Challenge, that brings home to you the wildness of the place. I’ve done a London triathlon, and this couldn’t be more different. In Mayo you’re swimming in the sea rather than the docks, and even though the race takes place on the calmer side of the peninsula, it’s still a pretty wild experience. And the cycling is just ridiculous: even when you’re going downhill, if the wind’s in your face it can feel like you’re going up.

London is such an amorphous, anonymous place by comparison, but my relationships with the two places are complicated.

I have a weird set of loyalties, following England in football and Ireland in rugby. Watching England play France last weekend, and wanting Ireland to win the championship at the same time, gave rise to mixed emotions, but I was happy with how it worked out in the end.

Stephen Mangan is on stage in Rules for Living at the National Theatre in London. He stars in a new series of the comedy Episodes on BBC Two in May

The Best Place to go Wild in Ireland award is presented on March 28th, at a ceremony in Áras Inis Gluaire, Belmullet. The celebration, from noon to 4pm, includes children’s activities, food and music. All are welcome

Come for the houses but stay for the drama: Selling Sunset is back
10