Walk for the Weekend: A Connemara island on the first day of spring 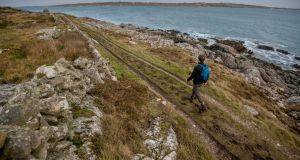 From a bird’s eye view this landscape might seem homogenous, but look closer and you see its texture and detail

In my mind the real Connemara is not to be found on the tour-bus routes that pass Killary Harbour or Kylemore Abbey, but in places like Ceantar na hOileán, the archipelago of Gaeltacht islands in the southwest of the region.

Far from tourist hotspots, devoid of iconic mountains, and at the end of a road that leads nowhere, na hOileán is a densely populated and thriving Gaeltacht with a strange landscape all of its own. A new looped walk explores the largest of the islands here, Garumna.

From the mapboard, the trail follows the road westward across an expanse of bare granite, heather and peat. Beside Loch Thoirbirt (which I’ve seen anglicised as Hirbirt and Hibbert) the arrows direct you left down a quieter road past low-lying bungalows and through a warren of stone-walled fields.

From a bird’s eye view this landscape might seem homogenous, but look closer and you see its texture and detail. Each field – each corner of a field, even – is different: some are damp and rushy while others are dry and heathery, some are tightly grazed while others succeed to bracken and gorse. Each tells a story of use, disuse, weather and soil.

In A Little Gaelic Kingdom, the second of his Connemara trilogy, Tim Robinson remarks how this landscape fits a Celtic definition of beauty, a kind that “arises out of the repetitive interweaving of simple elements” and one that “teems with ungraspable reiterations of details” – to my mind these might be the stone-walled field, the forgotten boreen, the single heather itself.

As you approach the wild south coast of Garumna the trail turns left on to a grassy lane, which was thick with mud when I visited. I walked here on the first day of spring.

Warming of the wind

When was this, you ask? Well, it isn’t marked by a date in the calendar, but rather by signs that are far more nebulous: a subtle change in the quality of light, a slight warming of the wind, the barely-noticed arrival of new birdsong.

At the start of spring all of these arrive quietly, and then seem to merge into one fresh and easy sensation that lifts the spirit lightly and unexpectedly, as if for the first time in years.

You emerge to a road and turn left, then right up ahead. Following the arrows down quiet roads and lanes, the trail leads you to the small harbour at An Trá Bháin. The late-medieval church here was believed to once be a gathering place for pilgrims heading to monasteries on the Aran Islands.

From the church, the trail joins a lane down to the beach and then follows the quiet shore northward.

As we walked here the day brightened. Across the water of Cuan an Fhir Mhóir here is Trá an Doilín near An Cheathrú Rua. The beach’s golden colour isn’t sand but bleached maerl, a type of coralline red algae washed in from a reef offshore.

You eventually emerge to a small pier, where the trail turns left on to a road. Up ahead you join another road and turn left again, bringing you back toward the trailhead.

Suitability: Flat walking but can be very muddy in places