In the first of our spring and summer cycling series, we head for a picturesque loop in Co Clare 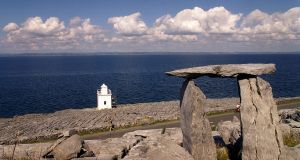 Perfect cycling conditions for a picturesque loop in Co Clare peppered with monuments and places of interest. Photograph: Mark McGrath

Start your cycle in the matchmaking centre of the world, Lisdoonvarna, popularised by the Christy Moore song. Cycle south-west on the R478 to Doolin and briefly the R479. The roads around here are busy as you are in the hinterland of the world-famous Cliffs of Moher which tower 215m (700ft) above the Atlantic. If you have time, they are well worth visiting, just follow the signposts.

Arriving at the scattered settlement of Doolin, turn left and follow the coast road for a few kilometres. To the west, the Aran Islands can be seen from here. They’re great for cycling too – you can bring your bike on the ferry. Pass by the 16th-century Doonagore Castle and spare a thought for the 170 Spanish sailors of the Armada who were shipwrecked on the cliffs near the castle in 1588. They were part of a large expeditionary force to help in a putative Irish rebellion and were duly hanged for their trouble.

Very soon on the R478, the entry point atop the Cliffs of Moher appears. A great downhill run takes you to the village of Liscannor and onwards to Lahinch in a matter of minutes. This is as far south as the route goes. Now head east, on the busy N67 (just 4km) to the attractive town of Ennistymon, which is famed, as are many towns in Clare, for traditional music.

Cycle through the town and onwards for a couple of kilometres before veering right onto the R481 to Kilfenora, the inspiration for a great poem by Clare poet Paul Durcan, The Kilfenora Teaboy.

Six kilometres east of the village on the R476, pick up the R480 at a ruined castle and take a sharp left. The road surface leaves a lot to be desired in places here but the scenery gradually becomes spectacular.

The blazing grey sheets of the Burren landscape contrast with the vivid green of the fields and the effect is stunning. Soon the Aillwee Caves are signposted – a 900m cave system that includes an underground river and waterfall. Just before the road descends to Ballyvaughan, one of Ireland’s most spectacular prehistoric monuments reveals itself. Standing 1.8m tall, the 5,000-year-old is breathtaking. The surrounding karst landscape seems to elevate the tomb still higher and has the effect of making you feel insignificant.

Now the road plunges through the spectacular Burren, past mournful Moneen mountain to the right and Gleninag mountain to the left. In between lies Galway Bay, which beckons like a siren. Bright and breezy Ballvaughan is a good place for a cuppa.

Now the route turns sharp left onto the R477 – a poor surface but with magnificent views of the Atlantic. The road snakes along the foot of the mountains to Black Head where a lone lighthouse sends out its beacon.

Continuing south, the Aran Islands once again appear. You may pass some climbers on the road hereabouts, Ailladie is one of Ireland’s best rock-climbing sites. Soon, the road turns sharp left and climbs south-east to the N67 and a mighty 1km back to base.

Start/finish: Lisdoonvarna. There is ample car parking in the town centre.

What to expect: Co Clare would seem to have it all – nature, landscape, history in abundance. This route offers spectacular scenery of both a coastal and inland nature. The mix of good and poor roads is more than compensated for by the fantastic views. Note that there is moderate traffic to be expected and take care accordingly.

Edited extract from Cycling Munster – Great Road Routes by Dan MacCarthy, published by The Collins Press, €14.99/£12.99. Available in bookshops and from collinspress.ie.