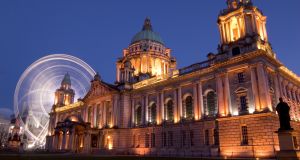 “Belfast is planning for lots of tourists, and even the briefest walk around the city centre demonstrates a clear confidence in its future as destination for both tourists and conference delegates.” Photograph: Getty Images

Here’s a thing: if I never ate another bit of chocolate again in my life I wouldn’t miss it. My preference is for savoury, sour and salty things, very rarely anything sweet, especially not chocolate. So that tells you something about the quality of what’s on offer in Deirdre McCanny’s Co Couture gourmet artisan chocolate shop on Belfast’s Chichester Street.

I’m in Belfast for a brief visit, and the first stop I’m directed to by local people in the know is McCanny’s. Her tiny basement premises is a cafe as well as a shop. There are just a couple of tables, with a large, caramel-coloured velvet sofa in one corner where you can recover from your Co Couture chocolate coma. On offer to consume in-house are cups of hot chocolate that come with little jugs of cream, which cuts through the dark, rich sweetness like angels swooping through a black night.

McCanny sources all her chocolate from Madagascar, and she has been there too, to visit the cocoa plantations. She sells her beautiful, individual chocolates, chocolate bars and bags of that fabulous hot chocolate on site in the cafe. Nothing is sold online: refreshingly, you have to go in person to her one-off little shop if you want to sample these products. The chocolates – rose, orange, house dark and several others – even glisten with gold. “I call it make-up for chocolate,” McCanny jokes. Co Couture deserves to be a destination shop on any visit to Belfast.

Then it’s off to Sawers, a long-established deli on College Street than makes Dublin’s Fallon & Byrne look like Mother Hubbard’s cupboard. It’s like a one-stop-shop food festival. I’m never cooking in Belfast, so this is a shop I’ve never been to, and it’s a marvel. I can only guess at the turnover they must have, as every available inch of counter, deli and shelf space is crammed with produce.

Whether its caviar or truffle-flavoured crisps you’re after, rose harissa, preserved lemons, one of the 200 cheeses in stock or legs of Spanish jamón, this is a food paradise. In addition to importing artisan produce from small Italian, Spanish and Portuguese suppliers, Sawers also supports local suppliers, such as fishmonger Walter Ewing, whose smoked salmon the deli stocks. Sawers also make a range of their own produce, a line that includes smoky apricot chutney, marmalade and spiced pineapple chutney.

As it happens, it’s four years since I visited Belfast, and I’m struck by the fact that it seems like every second former grand bank or industrial building is in the process of being converted into a hotel. Belfast is planning for lots of tourists in the coming months and years, and even the briefest walk around the city centre demonstrates a clear confidence in its future as destination for both tourists and conference delegates.

One of the most recently-opened hotels in the city is the Bullitt, on Church Lane, which has the most knowing name of any hotel in Belfast. (I also saw chocolate revolvers on sale at a market stall, which tells you a lot about how Belfast has moved on.) This is where I stayed for a night, and although it is owned by the same group that has the five-star Merchant Hotel (itself a former bank), it has a functional aesthetic that is fresh for Belfast.

The Bullitt’s public areas are all done in an industrial style, with lots of exposed pipes and retro chairs. There are three room sizes: small, medium and large, or “dinky”, “comfy” and “roomy”, which sound rather like three of the Seven Dwarfs.

The bedrooms, all 43 of them, are thankfully free of the cushions, wardrobes, trouser presses and all the other mystifying objects that still clutter many hotel rooms. Instead of a wardrobe there is a red-painted rack with hangers, which immediately minimises the chances of you leaving stuff hanging forgotten in said wardrobe, which I have sadly done several times in the past. You can also choose to have a breakfast bag to go, which comes in the form of fruit, juice and granola with yoghurt, which is hung on your door handle overnight.

From Bullitt to Baltic – the name of the hotel’s ski-themed bar, which has a ceiling made of skis. The hotel restaurant where we ate is called Taylor & Clay, and it’s central feature is an “asador grill”, a type of fire pit for grilling meat, which is common in many Argentinian restaurants.

Interestingly, they don’t serve Argentinian-sourced meat, but wagyu beef, which is originally Japanese in origin. The excellent wagyu beef, which we had, is Irish. So there’s the conundrum of modern Belfast for you: a hotel boldly named after something that comes out of a gun, with an Argentinian-inspired meat grill in its restaurant, serving meat that’s usually only found in Japan, but which came from Ireland. That’s a city shaking itself up.

Rosita Boland was a guest of Visit Belfast. See visitbelfast.com