Ireland’s top 10 castles to stay in

Book yourself into one of the 12 luxury rooms in the original castle part of Cabra Castle for the full aristo effect.

The hotel, just outside Kingscourt, dates to 1760 and has expansive gardens and parkland as well as panoramic views of Dún na Rí Forest Park nearby. No two rooms are the same but expect more than your fair share of canopy, four-poster and half-tester beds, not to mention bedrooms with fancy monikers.

It’s a hugely popular olde worlde wedding venue but don’t get carried away – sleeping in the Lord’s Bedchamber doesn’t give you leave to suggest droit du seigneur to the wedding party downstairs. Dinner and b&b from €105 pps. See cabracastle.com

The Corscadden family, owners of the aforementioned Cabra Castle – plus Ballyseede Castle in Kerry and Bellingham Castle in Louth – recently added Markree Castle, an imposing castle hotel in Sligo, to its collection. Indeed, it’s the only castle hotel in Sligo. For the previous 370 years Markree was home to the Cooper family and hopefully you’ll still see that lineage commemorated in the magnificent stained-glass window over the main staircase. With beautiful Italianate gardens and 500 acres of fields and parkland, it’s one to watch when it reopens after an extensive refurbishment in spring 2016. See markreecastle.ie Castle Durrow, Co Laois More chateau than castle – sans a turret or two – Castle Durrow in Co Laois is not the place to go for battlements or machicolations. But do you really need a murder hole to feel you’re on holiday?

In any case, who are we to argue the toss between castles and palaces when a hotel has just been voted one of the Top 10 Hotel Castles in the World by Trip Advisor, as this property has. It certainly has all necessary accoutrements including sweeping staircases, antique furniture and four-poster beds. But you don’t have to pay a king’s ransom to stay. Midweek overnights, including dinner, from €175 per couple. See castledurrow.com 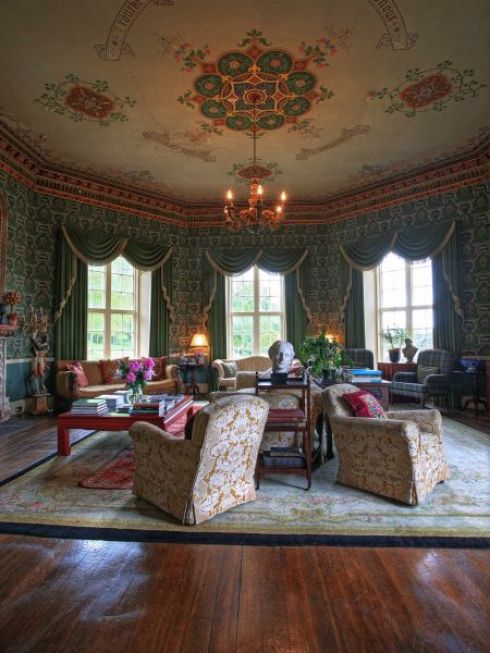 It’s fair to assume Prince Charles knows a thing or two about castles. When he visited Ireland earlier this year it was to Lough Cutra Castle, in Gort, Co Galway, that he repaired.

It makes sense given that it and his mother’s home, Buckingham Palace, share the same architect, John Nash.

Though primarily a family home (of the Gwyn-Joneses), the gothic revival castle, scenically located beside a 400-hectare lake – the largest privately owned lake in Europe – is available to rent for house parties and weddings. The nightly rate for 18 people starts at €3,500, with a two-night minimum applying. See loughcutra.com

The building that gives Killiane Castle in Drinagh, just outside Wexford Town, its name is a Norman tower house built in 1470. Standing 15 metres high with walls up to three metres thick, visitors can nevertheless breach it any time they like as it’s run as a farmhouse b&b by its current owners.

You can’t sleep in the castle (you’ll have to make do with their 15th-century home next door), but you can explore it and feel king of all you survey from its rooftop. It’s got all you could want in a castle, too, including battlements, turrets and parapets, plus original ogee windows. It also has its very own dungeon, so no robbing the teaspoons. Singles from €75 a night including breakfast. See killianecastle.com

Be king of the castle for a night and lord it over 25 of your very best friends with a private rental of Blackwater Castle. A 12th-century gem, built on the site of a 2,500-year-old fort, it sits on a rocky outcrop overlooking the River Awbeg. All sorts of aristos have stayed here, from Sir Walter Raleigh to “king of pop” Michael Jackson.

The current owners can organise anything from casual barbecues to hospitality on a grand scale – including housekeeping, bartending and babysitting. What more could you and 25 of your very best friends ask for? From €3,000 for a weekend stay. See blackwatercastle.com

Built in the early 1800s and burnt out in the Civil War of 1922, the restoration of Lisheen Castle was a labour of love for the Everard Family, on whose dairy farm its ruins stood. Reopened in 2000, it’s now available for weekly rentals, either self-catering or all-inclusive (which includes day trips and tours), and has been attracting groups of up to 14 guests ever since.

Almost all of these have come from the US and Canada, which makes sense because, if you’re going to come and see the oul’ sod, where better than a place from where you can see half of it in one go – the views from the roof are panoramic. From €6,240 a week. See lisheencastle.com

Think castles can’t be cosy? Check out the miniature medieval one at Annes Grove near Castletownroche. Built in the 1850s to impress visitors to Annesgrove House (as if its famous gardens weren’t impressive enough) it has all the stately touches the discerning castle lover could require. These include loop hole windows for firing arrows out of and leaded ones for looking out of, plus battlements and its own turret. Okay, so there’s no banqueting hall, but it has a decent kitchen and a large open hearth in the sitting-room, with a cute wood-burning stove in the middle of it. The one-bedroom castle is available from €305 per weekend. See irishlandmark.com

Not the ancestral home of Lord Homer and Lady Marge Simpson but of Lord and Lady Muskerry, Springfield Castle in Drumcollagher sits on a large organic estate accessed via a long avenue of lime trees. Available for both weddings and family get-togethers, it’s actually two castles in one because as well as the neo-gothic main house there’s a restored 15th-century tower.

Visitors can book one or both, depending on the size of the party. The property can accommodate up to 24 people in total and has all sorts of extras including sauna, tennis courts and a children’s playground. Stay self-catering for total freedom, or organise to have a catered stay for that real lord of the manor feeling. Rates for the full property start at €4,860 for a week. See springfieldcastle.com

They don’t come much older than this sixth-century tower house in Cuffsgrange, now restored to its former glory using the techniques and materials of the original builders.

The five-storey building is beautifully furnished, with stately bed chambers (bedroom doesn’t quite cut it), a double-height baronial drawing-room at the top and a dining-room with church pew-style seating for 12. Stairs lead up to the ramparts where, on a fine day, you can see Mount Leinster and Slievenamon. Ballybur can accommodate up to 12 people, with weekly stays from €1,800. See ballyburcastle.com

Cook up a global feast without leaving home

‘Covid puppies’ and stressed cats: why your pet might need a mini-break