Humdrum honeymoon? Here are some alternatives for happy couples

Couch-surfing, festivals, a UFO house, and LGBT-friendly hotels – kick off the sandals and have a truly memorable honeymoon 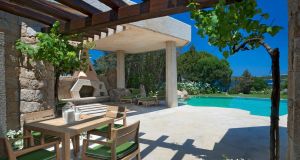 Got yourself a bog standard beloved? Didn’t think so. Then why settle for just AN Other honeymoon? You know, the resort with the palm trees, the powder sand and the barbed-wire fence. We’ve rounded up a few alternative options for a match made in honeymoon heaven.

Honeymoon for free
For a generation raised on getting stuff for nothing – movies, music, newspapers – the idea of honeymooning for free shouldn’t be too much of a stretch. Okay, so you’ve got to pay for your airfare, but after that the world is pretty much your oyster if your beloved is prepared to couch-surf.

With organisations such as Couchsurfing.org, GlobalFreeloaders.com and Belodged. com you can stay in any country on the planet, for free. Okay, so you’re not likely to get a rose petal turndown, but who needs a cheesy facsimile of romance when you’re staying in a private Riad in Marrakech or a moonlit cave in Petra?

Alternatively, on the assumption that one or both of you already has a house by the time you get married – because this one probably won’t wash with your parents – you can also cut the cost of your honeymoon to zero with a house swap.

You’ll find options at homelink.ie, intervac-homeexchange.com and lovehomeswap.com, but be warned, if you’re a bridezilla, or a groomzilla for that matter, forget about this one. The stress of having to clean up the house on top of organising the wedding is enough to have you honeymooning in a rehab facility.

Make a festival of it
Feel like everyone else is out celebrating your wedding, even if they don’t know it, by attending a once-in-a-lifetime festival. Here too there are endless options, including Burning Man (burningman.com), the 50,000-person homage to self-reliance and self-expression that takes place at the end of August in the Nevada desert. Just remember to bring enough provisions with you to last the eight days because there are no vendors and even you guys can’t live on love alone.

For something more traditional join the frenzy at Fallas, the great feria that takes place in Valencia (visitvalencia.com) every March. Spain is the madre y padre of festivals so you’ve loads to chose from in that country alone, including the Tomatina mess-fest in August, the running of the bulls in Pamplona in July and (a personal favourite) the baby-jumping – yes, you heard right – festival of El Colacho which takes place in Castrillo de Murcia each year.

For scale head to Rio’s Carnival or New Orleans for Mardi Gras, or, to stick with a love theme, make for Naked Man, a 500-year-old Japanese festival that sees 10,000 be-thonged men immerse themselves in freezing water before running through the streets and wresting for sticks. What could be more romantic?

Splendid isolation in Sweden
For utter immersion in each another, how about the Utter Inn, a traditional Swedish wooden cabin that just happens to be floating in a lake in Vasteras (visitvasteras.se), an hour and a half from Stockholm, with a submarine bedroom. Room service comes via motorboat and if anyone else rocks up, you can just refuse permission to board.

As befits the country which gave us Greta Garbo, the country has plenty of options for couples looking for a complete escape.

At the Treehotel (treehotel.se) in Harads, a remote village in the northwest of the country, there is an array of accommodation types on offer, all of which are in trees. Access is variously by ramps, rope bridges and an electric stairs, with an eclectic mix of lodgings including a mirror cube, a UFO and a traditional red cabin, all perched in the forest canopy. Opt for The Nest, a tightly woven bundle of sticks in the treetops, and you two lovebirds can pull up a retractable ladder behind you for total seclusion, for around €500 a night.

Bring the kids
With the rise of blended families and of couples having kids – a real commitment – long before they tie the knot, the idea of bringing children on honeymoon can make a huge amount of sense.

Stay at its resort on the seven-mile beach at Negril, Jamaica, and avail of a special offer that gets you a free candlelit dinner or a 30-minute couples massage for family holidays booked between August 15th and November 21st – perfect in case you do start regretting you brought the kids on holiday. Adults from $292 per night (€253) and kids from $47 (€40).

Budget bargains
Now bear with me on this one because I know nothing seems less romantic than holidaying with a group tour – unless it’s a particularly swinging type of tour group, in which case, run.

But if you’re on a budget – financially or temporally – the fact is you just can’t top a tour in terms of bang for your buck. Citiescapes (citiescapes.ie), for example, is currently offering a three-night package to Riga, whose historic centre is on the Unesco World Heritage List, in a deal that includes four-star hotel, breakfast, guided tour of the city, flights, transfers and baggage – all for less than €300 per person. For a short but sweet honeymoon, that’s hard to beat.

Travel Department’s (traveldepartment.ie) Occasions division has three-night packages to Prague, staying in a five-star hotel, B&B, from €509 per person, including walking tour, flights and transfers. Its SuperSaver Costa Brava package offers four days, B&B, in a three-star hotel in the seaside town of Calella del Mar, with flights and transfers, for €299.

At these prices you could string a bunch of them together, have an extended honeymoon and still have change from what you spent on wedding photography.

Blow the budget
Alternatively, if the honeymoon is the only thing that’s kept you going through endless venue visits, bridesmaid spats and guest list disputes, then you’re going to want to splurge on the honeymoon.

For a chance to live like a lord, or possibly a Russian oligarch, head to the Sardinian resort of Porto Cervo, home to a slew of the most expensive hotel rooms in the world. Stay at the Hotel Pitrizza (pitrizzahotel.com), a hotel made up of villa properties with private pools, butler service and stunning views, for around €2,000 a night.

By tradition honeymooners are not short of things to do, but if you do find yourselves at a loose end you could always pop over to the local nightclub, Billionaire. There you can slum it, if its Facebook page is any guide, with such beautiful people as Craig David, Paris Hilton and, em, Bernie Ecclestone.

Honeymoon at home
Don’t laugh. It’s what your grandparents did and look how long they stayed married. And who cares if it rains – sure you’ll hardly be coming up for air, right?

Not only is an Irish honeymoon good enough for the hundreds of loved-up newlyweds who come here from abroad each year but, if you go this route, you won’t have to worry about passports, visas and malaria tablets – for now.

Blow the money you save on flights and stay in fancy lodgings instead, opting for designer chic at the Cliff House Hotel (thecliffhousehotel.com) in Waterford, romance at Castle Leslie (castleleslie.com) in Monaghan or good old-fashioned luxury at Ashford Castle (ashfordcastle.com) in Mayo, this last from around €550 a night.

Honeymoon with pride
Hotels don’t come more gay-friendly than the Sunseeker LGBT Resort (mauisunseeker.com) on the Hawaiian island of Maui. In its own words it “caters primarily to the discerning LGBT traveller but all awesome adults are welcome”.

They’ve even done the stats: the adults-only property has a demographic of about 50 per cent gay men, 35 per cent lesbian women and 15 per cent “very cool straight, bisexual or transgender individuals/couples”. Assuming you’d fit into even one of those categories, penthouse suites, overlooking the clothing-optional saline pool, are available from $499 (€434) a night.

Or how about Las Vegas? As the city’s tourism authority puts it, “New York can have its Broadway. We’ve got Elton, Jersey Boys and Britney, b*tch! Paris can keep its lights. We’ve got some of the most breathtaking sights this side of the rainbow. And no one’s going to tell us that an oasis called Sin City isn’t going to be friendly in all the right ways.”

With dedicated “pride concierges” at hotels like the Wynn and Encore, and weekly summer LGBTQ pool parties at the Luxor (Pyramid King Rooms from around $123 a night) close to the city’s famous Fruit Loop, a cluster of LGBT nightclubs and businesses on Naples Street, what’s not to love?

And just in case you’ve gone and put the cart before the horse, honeymoon-wise, you can always tie the knot in a nearby wedding chapel while you’re there.