You’re guaranteed a wild night staying at these wacky places 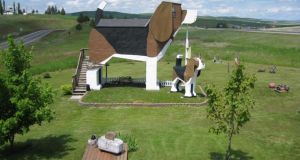 Spend a night in the Dog Bark Park Inn in Idaho, USA

Swedish silver mine
Sleep in silver – at a depth of 155m, in an 18th-century Swedish silver mine. Accessible by elevator, your bedroom is decorated in Gothic Baroque style. You’ll also get a tour of the long disused mines, complete with underground lakes. Cold and dark, but definitely magical. Fly to Stockholm, or via London to Vasteras. From €528 for two. salasilvergruva.se

Doghouse in Idaho
Stay inside the world’s biggest beagle. Seriously. In the heart of the Idaho prairies is a B&B in a beagle, created by chainsaw artists Dennis Sullivan and Frances Conklin, who say that “sleeping in the doghouse is a good thing”. Prices from $98 (€79)pps, and yes, dogs are welcome to stay too – for an extra €12. dogbarkparkinn.com

Wicklow lighthouse
Spectacular views, a winding stair, and round rooms are the order of the day at the Landmark Trust’s Wicklow Head Lighthouse, where you sleep in the lighthouse itself, rather in a keeper’s cottage. A stay here is something special, and to be in the top-floor lounge in the eye of a storm is unforgettable. Sleeps four, from €575 per weekend. irishlandmark.com

Jumbo in Stockholm
Most of us can’t wait to get off the plane, but at Jumbo Stay, the plane is your hotel. Sited at Stockholm’s Arlanda airport, a single en-suite room will set you back €166, with hostel-style shared rooms for less. Or splash out on the luxury cockpit suite. There’s also a cafe, though don’t expect chicken-or-beef. jumbostay.com

Fairytales in Belgium
Fairytale fanatics should head to Belgium and La Balade des Gnomes, where the mind can freely boggle and rooms include a suite in a “Trojan horse” (complete with drawbridge), or a yacht floating in a pool – on the third floor. From €145 including breakfast. Fly to Brussels.
labaladedesgnomes.be

Salt flats in Bolivia
Get Salty in Bolivia where the Palacio de Sal is made, you guessed it, from 100 per cent salt. Even the furniture is made from salt. Sited on the Salar de Uyni, the world’s largest salt flat, up in the Andes, it’s in an isolated spot, though an internal flight will bring you to La Paz. Ordering a tequila and licking the walls is not recommended. B&B from $145 (€117) per night. palaciodesal.com.bo

Rotating in Turkey
So what’s so wild about the Marmara? Appropriately enough, given it’s in Antalya, Turkey, home of the Whirling Dervishes, this hotel rotates, meaning you’ll always wake up to a different view. Make sure you book in the rotating part, and prepare to get into a spin. From €250 per night. antalya.themarmarahotels.com

Up a tree in Sweden
Sweden seems to have more than its fair share of wild night spots, and they’ve taken flight at the Tree Hotel. Some of Scandinavia’s leading architects have built six separate rooms, up in the branches. The bird’s nest and the UFO are funky, but we love the Mirror Cube best. Why? Because it’s so incredibly beautiful. B&B costs €500 for two. Closest airport is Luleá. treehotel.se

Wonder in Nantes
Wake up in an artwork at the Villa Cheminée in Nantes. In 2009, Japanese artist Tatzu Nishi created a tiny house on top of an industrial tower for an art event, and it’s there to this day, complete with tiny garden, kitchen, bathroom and bedroom for two. Lovely views and a sense of wonder guaranteed. Fly to Nantes. B&B from €95. nantes-tourisme.com