Restorative ramble: A stroll through one of Co Dublin’s oldest woodlands 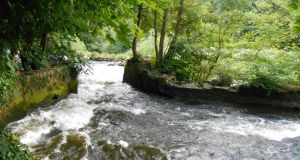 There’s so little old woodland in Ireland it feels like an exotic habitat. Trees once covered our island, but today walking in woods is a novelty compared to walking on hills, beaches or bog. I was browsing a study of ancient Irish woodlands recently, hoping to discover those last places this primeval landscape survives and came across one listing for Dublin: St Catherine’s Wood, Lucan.

One Sunday evening in late July, I caught a train from Connolly station to Leixlip Confey and walked to St Catherine’s. The sun was coming out after a heavy downpour and a rainbow formed over a field where highland cattle grazed. This hardy, mountainous breed was introduced here last year to improve meadow biodiversity. The cattle will graze and trample some parts of the field more than others, encouraging a wider range of plants to grow.

The old wood is just inside the Dublin county border. St Catherine’s gets its name from a priory founded by Warisius de Pech here in 1219. At the time it was considered the duty of Anglo-Norman lords to establish religious foundations to save their souls and those of their ancestors.

Over the centuries the estate passed between different owners. Trinity College pharmacy professor Christopher O’Connor owned the lands in the 1940s and 1950s. He grew exotic plants such as poppies, carnations and deadly nightshade, which were sent to a pharmaceutical plant in Tipperary, according to an article by local historian Mary Mulhall in the Lucan Newsletter in 2012.

My walking buddy and I followed the path into the woods which sit on a steep glacial ridge above the Liffey. The canopy here is dominated by ash and beech. The latter was introduced to Ireland in the 16th century. There’s plenty of sycamore here too, but only the odd oak.

Some rare woodland plants recorded at St Catherine’s suggest this wood may be ancient. The naturalist Robert Lloyd Praeger found the yellowbird’s nest plant here in 1934, although it hasn’t been seen since. More recently the common toothwort was recorded.

We took a side trail down to the remains of an old sluice gate, where the Liffey is squeezed through a narrow gap in a torrent of whitewater. A kayaker was play- boating in the rapids. We startled a heron on the riverbank and watched a woodpigeon drink from the water.

Then we rejoined the main path and climbed to the upper woodland, following the trail back towards the cattle field and out of the woods.

Our stroll left me thinking that even though there are too few of them in Ireland, woodland walks always provide the most restorative kind of ramble.

Robert Louis Stevenson, in one of this travel essays, wrote: “It is not so much for its beauty that the forest makes a claim upon men’s hearts, as for that subtle something, that quality of the air, that emanation from the old trees, that so wonderfully changes and renews a weary spirit.”