A ramble around a deserted town in Roscommon 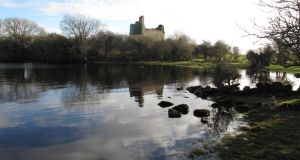 A chance stop on the way to a walk by Lough Ree recently led to my discovery of the most wonderful of low-level walks.

I had stopped off in Lecarrow on the N61. As I sipped my coffee, I told the barman about my intended walk. “Don’t bother with that old place,” he said, “go down the road there and you’ll find a walk that you won’t find the like of anywhere else in Ireland. ” And so I found myself at a gateway leading to a looped walk around a deserted Anglo-Norman town established in 1227. Having had a population of a thousand, it was destroyed and forgotten in less than 150 years. The surviving remains contain one of the most important collections of medieval structures in the country.

It was visited only by handfuls of historians until the St John’s Point Church Heritage Group developed the walk and began a conservation programme. Their detailed information panels along the route set a standard that should be followed by other walk developers. The start of the walk gave no hint of what was to come. I crossed three large fields of well grazed pasture land to the shores of Lough Ree. As I headed south, I was astonished to see a defensive stone wall running right across the neck of the peninsula. It has a main gate house and three mural towers, which by their projection and superior height made possible the satisfactory defence of the wall from its arrow slits and fighting top.

The path continues between the dry-stone walls of the pastures and the lake shore. As I turned a corner, I came to a bay and reflected in its still waters, I caught my first glimpse of Rinn Duin Castle.

Quick to establish their hegemony in the east of the country, it took the Normans 65 years to cross the Shannon. They built a series of castles, the most northerly of which was Rinn Duin. There is a theory that this may also be the site of a Viking settlement.

The castle is now an ivy-covered ruin but impressive none the less. The safe harbour below it has evidence of a slip way and jetties. Beyond the castle is the cylindrical structure of the windmill.

The path around the end of the peninsula leads through oak, hazel and ash woodland.

Then I came upon the ruins of the chapel and at the end of the walk the remains of the hospital, which predates the town and was established in 1216 by King John for the Fratres Cruciferi and survived until 1487. It subsequently became a church and indeed there was probably an early Christian church on the site as two hand bells and a bronze crucifixion plaque were found on the site and are now in the National Museum.

It is a walk that will linger in my mind and one which I intend to retrace in different seasons in years to come.