The long route to Poolbeg: it’s windblown and chilly but this walk is well worth the tilt 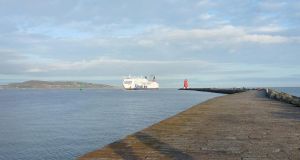 Over the years, I’ve looked at it countless times from Clontarf, Dollymount, Howth, Sandymount seafront and from the Dart and it was obvious to me that there was some way to get out there – but how? And for years the question remained unsolved until I discovered how to get to that remote red landmark, and a landmark it certainly is. Finally, having filed this knowledge away for decades, I stepped out and took the long route to the Poolbeg lighthouse.

From the start, head off on an obvious metalled trail towards Dublin’s tallest chimneys. The going is easy and the main obstacles are the rest of humanity who are struggling to mind their children, maintain stride pattern or cycling cadence . This can be a busy trail.

While the trail follows the coast the surface changes and becomes less buggy friendly but still manageable. It is also a good spot for birdwatchers. A variety of birds can be seen along this route and for those interested, it is recommended to take binoculars . In particular, a sanctuary for Brent Geese has been established in Irishtown Nature Park and you may see hundreds having a cold dip in the sea on your right and others settled in confidence in the sanctuary on your left.

Another thing to note is that this site was once Dublin’s biggest dump. For decades, the area was visited by hundreds of thousands of vehicles carrying the city’s rubbish (and maybe, from further afield) creating this reclaimed amenity. But no matter how this information might colour your view of the area it is a treasure and hundreds of thousands of footfalls, wheel rotations and buggies validate this.

The enormous twin tower chimneys loom in front of you and the harsh industrial landscape threatens your consciousness. It is clear that this place was not created for Mardi Gras – no – this was the unpleasant engine of the big city, the place we knew had to exist but didn’t want to see. But it is not that bad, in fact it is very interesting and further exploration is recommended.

Continuing past the chimneys, the route is now on a roadside footpath and eventually leads you to the South Bull Wall. I prefer to refer to the South Wall as the South Bull, simply because the present configuration of Dublin bay is characterised by the North Bull Wall (Dollymount) and the South Bull Wall. In the past, two sandbanks – the north bull and the south bull – presented serious problems for shipping. The South Bull Wall was built to deal with this. However, this proved inadequate and a certain Captain William Bligh of Mutiny on the Bounty fame was commissioned to give his expert opinion on what should be done. The outcome was that the North Bull Wall was built. A fact that Charles Laughton, Clark Gable, Trevor Howard, Marlon Brando, Anthony Hopkins, Mel Gibson and many others probably weren’t aware of.

From here it is straightforward, turn right and place your feet on a granite surface that was first set in place in the late 18th Century. It may be lumpy, just be watchful and place your feet carefully. Next, you reach the Half Moon battery or what is now the Half Moon Swimming and Water Polo Club . Onwards to the Poolbeg – it may be windblown, it may be freezing but it is worth the tilt. The Poolbeg looms huge when you stand under it but this is it – you are as far out into Dublin Bay as you can get.

If the wind is whistling, grab on to something.

‘You guys are amazing’: Matt Damon’s message of support to Temple Street children, families and staff
7