First Look: Why is Center Parcs so expensive, and will it be worth it? 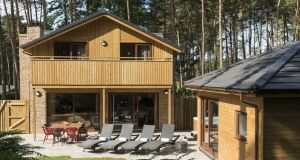 Four-bedroom lodge and patio at the new Center Parcs in Co Longford.

When Center Parcs chief executive, Martin Dalby, is asked about the pricing structure of the family holiday destination due to open in a Longford forest in less than three months, and why it appears so expensive, he has his answer ready to go.

He says Center Parcs offers “a price point for everyone”, and points out that four nights in a two-bedroom lodge in the sprawling resort can be had for as little as €299.

He’s not wrong. There are lodges available at that price, but if you want stay here for less than 300 quid, you will need to book your mini-break mid-week in mid-winter.

If, however, you fancy booking your stay during school holidays or over weekends when the sun gods might still be smiling on you, then you can expect to spend around €700 for a small lodge for three or four nights.

If you want to splash out and book a four-night stay in a four-bedroom lodge with a pool table, hot tub, sauna and steam room in high season, you will do well to have change out of €3,000. And that is before a single pancake or trip down a zip wire is paid for.

The prices at the very highest end are - inevitably - the ones that grab all the headlines. In the UK and more recently in Ireland, there is a perception that a Center Parcs break is an expensive break.

Dalby admits Center Parcs does not offer cheap holidays, but is adamant that what it does offer is great holidays, which create great memories for both adults and children.

He’s right. You can - if you so chose - spend a lot of money in Center Parcs. You can do four or five of the 100 activities on offer each day and pay separately for each one. And you can eat your breakfast, lunch and dinner in one of the 10 restaurants on site, and spend hours at night in the bars or the bowling alley.

When you add up the cost of all that, it will be pretty eye-watering.

Alternatively, you can book a lodge, bring your own food, rent bikes and spend most of your time hanging out with your family in the free sub-tropical swimming pool complex, and the costs will be a lot less than two rooms in an ordinary, mid-priced Irish hotel.

All 466 lodges and the 30 apartments on the site in Co Longford are now finished, and the destination is well on course to open its doors in August, after a €233 million investment.

Bookings are now open for short breaks from August 16th. Earlier bookings are likely to open soon, as long as Dalby and his team are more confident they can get the doors open on time. It looks like they are nearly there now.

What is striking about the Longford site is how comfortably lived in it already appears. The two, three and four-bedroom lodges have all been placed in woodland previously been planted by Coillte. While the site is weeks away from opening, it already looks like it has been with us forever.

It is also striking how closely the 400-acre resort follows the template laid down in Center Parcs resorts across the UK. Apart from the Irish phone boxes dotted around the place - which will be kitted out with emergency telephones - it could be deep in the heart of middle England.

That is sort of the point of the place. Why would they change a thing, when it all works so well in the UK? Center Parcs has year round occupancy in the UK in excess of 90 per cent.

There will be three types of lodges for families to choose from in Longford - Woodland, Executive and Exclusive. An additional 30 Lakeside Apartments, more suited to couples, are also available. All come with kitchens, flat screen televisions, log burning stoves, patio furniture and private barbecues.

Dalby points out that all the activities are optional, and they are not going to “ring a bell at 8 in the morning” demanding people do particular things. “When you get here, you can do as much or as little as you like,” he says. “The forest is free, the air is free, the pool is free.”

The pool - or the Subtropical Swimming Paradise, to give it its proper name - is almost finished and looms large on the site. It will be the big draw for most visitors, as the largest waterpark in Ireland with a wave pool, jacuzzis, wild water rapids, a toddler area, and some hilariously terrifying slides. It all sits under a glass dome, heated to just under 30 degrees.

It is bigger than the pool complex in the Woburn Forest Center Parcs outside London. The whole park in Longford, when full, will accommodate 2,500 people, compared to the almost 5,000 that can stay in the UK resort, which should make the pool complex seem airy, and will definitely reduce the queues.

While the resort will soon make a big splash in Irish tourism circles, it will make an even more enduring mark in Co Longford. When doors open it will employ 1,000 people, mostly locals. Many of them will be under 25, and for the first time will have an alternative to moving to a bigger urban centre in search of work.

“The majority of those people will live in the area. Full-time jobs for younger people so they won’t have to leave the area,” Dalby says. “Recruitment is going well, bookings are going well, the programme is on schedule and the quality of what the builders are delivering is fantastic. It is all fantastic.”