We’re all going to Iceland 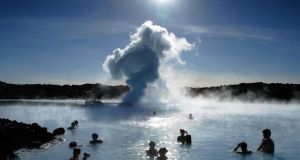 The Blue Lagoon: ‘There can be no more surreal way to arrive in a country than to almost immediately immerse yourself in opaque turquoise waters surrounded by moss-covered lava fields.’ Photograph: Leon Neal/AFP/Getty Images 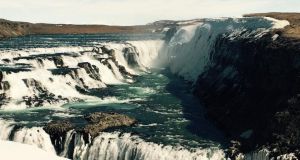 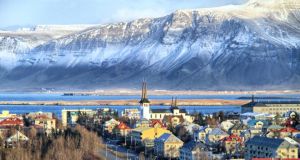 Iceland feels much, much farther away from Ireland than the two hours and 20 minutes it will be from June 2nd, when the Icelandic low-cost airline Wow starts direct flights between Reykjavik and Dublin.

On a recent visit it took nearly 12 hours via London, each way, but it will soon take less than the time to drive from Dublin to Galway to fly to Iceland.

It’s a country that fascinates and stirs so many people who have never been there; a place of the imagination in the way that our own country also is for so many.

I have absorbed three pieces of information about Iceland: one, that astronauts did part of their training there, prior to going to the moon for the first time; two, that everyone plays chess and reads voraciously; and three, that there is one day a year when the parliament speaks in verse, in homage to the great Icelandic sagas.

Earlier this month, I wake up on an aircraft as it is flying over Iceland. I have been asleep since leaving London. I look down into that blue, blue sea and the emptiness of snow-covered tundra, broken only by shining lakes and the distinctive cones of volcanoes and feel rather like an astronaut myself. I am so absorbed in taking everything in, that, on landing, I leave my newest, most expensive and favourite jacket behind me on the seat.

The signs inside Keflavik airport hint at the quirkiness beyond. “There are many wonders in a cow’s head” declares one billboard, apropos of nothing, accompanied by a giant image of said head. What? I spot another sign near security that reads: “We like to eat rotten shark meat, so smelly toes won’t bother us. Please take off your shoes at the security check.”

Most journeys from international airports to the capital are a sorry slog through suburbs and traffic. My journey into Reykjavik comes with a diversion through the lava fields. You can choose to go straight into Iceland’s tiny capital by the buses that serve the airport or divert en route to swim in the Blue Lagoon.

Some 20 minutes after leaving the airport, I am putting on a swimsuit and stepping into the famous geothermal body. There can be no more surreal way to arrive in a country than to almost immediately immerse yourself in opaque turquoise waters surrounded by moss-covered lava fields, where clouds of steam evaporate into the clear, cold air. It’s a dream-like, beautiful and unique introduction.

I drift about for an hour or so in that thermal water, watching skeins of geese in the sky above, and temporarily forget about everything.

The population of Iceland is tiny: there are 328,000 people, most of them in Reykjavik in the southwest. The volcanoes are many: I shake my fist at Eyjafjallajökull, whose spewing ash left me stranded in the US for six extra days in 2010. The wildness of nature here is extreme: glaciers, active volcanoes, geysers.

Prices are high. Unusually for a developed country, there is hardly any public advertising, there are no international fast-food chains nor any generic high-street clothing lines. McDonald’s pulled out after the economic crisis that almost ruined the country in 2008 and has never returned.

Everyone seems to know everyone else. “I went to school with the minister for finance,” the man sitting at the restaurant table next to mine announces to his English-speaking visitors one night.

The parliament building is so modest it could be mistaken for a private house were it not for the formal stone carving on the roof and a particularly large flagpole.

“You see those rocks?” asks our guide, Sigrun Antonsdottir, pointing to large stones near one of the main roads going out of Reykjavik. “Elves live there. They cannot be disturbed. So the road had to be built around them. Such things happen regularly. The last time was six weeks ago.”

I am on one of the many day tours out of Reykjavik. This is the most popular trip, the Golden Circle, which takes in active geysers and a spectacular maw of a waterfall, the Gullfoss. At one of our stops, I ask Antonsdottir, “What does an elf look like?”

“They look a lot like us, but more beautiful, and much smaller, and they have no [she points to her philtrum, the space between the two tiny lines that run between nose and upper lip] whatever this is called in English.”

She is very precise. She does not smile. She appears certain both about the physical characteristics of elves and of their existence. I could not replicate that gravitas if a tourist asked me what a leprechaun looks like.

There is one dormant volcano that people can actually descend into. Thrihnukagigur can be entered via some kind of open basket that takes half a dozen people.

I put the three pieces of information about Iceland that I have convinced myself are true to Edda Hermannsdottir, a broadcaster and journalist. Yes, it is true many people play chess: her grandfather was a chess master, and she plays herself. Yes, everyone reads a lot. However, I can no longer cling to the delightful myth of politicians speaking in verse one day of the year.

And when I ask about the astronaut training, she says,“No, this is not true either. I would have heard about it.”

I am crushed. It is only later that day, when re-reading “Wall Street on the Tundra”, Michael Lewis’s analysis of the 2008 crash in Vanity Fair, that I discover “Nasa scientists used [Iceland] to acclimate the astronauts before the first moon mission”.

And then Google confirms that, in 1965 and 1969, 12 American astronauts visited Iceland to do field exercises in collecting rock samples. Of those 12, nine went to the moon.

Iceland might churn out stuffed puffins for its tourists, but it also does a knowing line of souvenirs. Mugs, coasters and T-shirts carry an image of a smoking volcano bearing the slogan: “Don’t f**k with Iceland! We may not have cash, but we’ve got ash!” Others are too filthy to reproduce here.

The landscape and natural world permeates everything in Iceland. Locally made jewellery features intricate, visceral reproductions of bird and animal bones, teeth and claws, in silver and oxidised bronze. A bizarre interactive toy you can buy for children is called Creative Fishbone Model Making, made from actual “sterilised fishbones”, according to the box.

The cafes are self-consciously grungy, with salvaged furniture. Every man seems to have a beard. Nordic jumpers are worn without irony. Music emanates from every basement. On a white wall on the main street, Laugavegur, is this anguished graffiti: “Iceland is fucking pretentious.”

I am too late in the year to see the Northern Lights, but all year round you can whale-watch, or glacier walk, or see the waterfalls, volcanoes and geysers that abound, or swim in thermal pools, which are so common that people gather there at the weekend to socialise in the way we go to the pub. You can, if you wish, eat smoked puffin, whale steak and reindeer burgers. The air is extremely clear, and makes it seem as if your vision has suddenly improved.

The country is on the brink of a tourism explosion. It had one million visitors last year, and the question now is where to go with development, because the numbers are only going to keep rising, as people seek out its pristine wilderness.

My Reykjavik hotel, the Central Plaza, is full every night, and it isn’t even high season. A new luxury hotel is being built at the Blue Lagoon. I’m glad I got to see the lagoon before it is finished. I can only hope that this stunning landscape remains this unspoiled.

As for my jacket, despite numerous attempts to locate it by airline staff, it remains missing. I suspect the elves have it.

Travel time between airport and Reykjavik: 45 minutes. Buses go regularly, for €7 one way.

Time of year to see the Northern Lights: September to mid-April.

Worth knowing: Hotel rooms of all rates in Reykjavik fill up quickly as there aren’t enough to serve current demand. Try AirBnB as an alternative.

Pre-book your visit to the Blue Lagoon, as there is a quota per day. Prices range from €35 to €165, depending on how many extras you want. bluelagoon.com

I knew I’d recover from Covid-19. But when Mam was struck down … that floored me
7