Dublin hotels are second most expensive in Europe 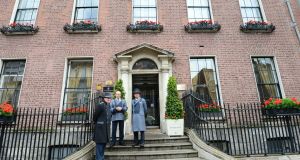 Dublin hotels continue to have a huge range in hotel prices. At the more expensive end of the ladder, the Merrion Hotel has prices starting at €350 per night for a superior queen room, which climb to €630 for a deluxe king room, according to its website. Photograph: Dara Mac Dónaill

New data from global hotel solutions provider HRS has revealed that Dublin hotel prices are now the second most expensive in Europe, overtaking historically costly cities such as London and Stockholm.

The figures show that hotel room rates in the capital have risen by 70 per cent between the second quarter of 2015 and 2016, resulting in an average rate of €188 per night. Oslo is now the only European city more expensive to spend the night in, at an average cost of €214 per night.

Dublin hotel prices are not alone in rising substantially over the last year, with costs on average across Europe rising by almost 50 per cent.

Jon West, managing director of HRS for the UK and Ireland, commented: “Dublin is certainly one to watch at the moment and has recovered significantly following its recent economic crisis. The city is increasingly seen as an ideal business destination and has already attracted major global firms, including Google, Facebook, Amazon and Microsoft. Therefore, more business travellers are coming to the city.”

The Irish Hotels Federation, however, has rejected what it teremed the "outlandish price claims" made by HRS. "The figures reported do not reflect the average rooms rates in Dublin during this period and are not representative of the 18,900 hotel rooms available for sale every day in Dublin. The research does not take account of the wide variety of sources of bookings that exists, including directly through individual hotel’s websites, through group bookings, third party booking websites, directly by phone and as part of the conference and event market segments. The IHF notes that industry figures show an average room rate of €111 in Dublin in 2015 and indicate an average rate of between €120 to €125 for the first half of 2016.

"The Irish Hotels Federation recommends that people book early to get the best value room rates and that they shop around and do not rely on just one source when comparing accommodation prices. It also advisable for people to check hotels’ own websites, where prices are often better and promotional rates may be available."

Dublin hotels continue to have a huge range in hotel prices. At the more expensive end of the ladder, the Merrion Hotel has prices starting at €350 per night for a superior queen room, which climb to €630 for a deluxe king room, according to its website.

But travellers can still find a bargain by shopping around. Trivago includes the four-star Croke Park Hotel among its best value hotels in Dublin, with rooms starting at €143.

Dublin hosted more than 4.9 million overseas visitors to Ireland in 2015, which was hailed as an “exceptional” year for Irish tourism by then minister for tourism Paschal Donohue.

A spokesperson for Fáilte Ireland, however, said that it continued to caution the hospitality industry to maintain value and competitiveness during a time of accommodation shortage. Tourist arrivals to Dublin grew by 33 per cent between 2010 and 2015, but the stock of available accommodation fell by 6 per cent.

“Our recent study into Dublin Visitor Accommodation maintains that the shortage will eventually improve with the right environment. However, if we lose our competitive edge in the meantime, demand could soften which is why we continue to caution the tourism industry to maintain value and competitiveness and focus on providing unforgettable experiences that will see visitors continue to return to Ireland and recommend us as a destination to family and friends.”

Labour spokesperson for urban regeneration Joe Costello has said that the increase in prices was not as severe as claimed by HRS, but that prices in the past two years have increased by almost 50 per cent. “The tourist industry has taken off. In five years there hasn’t been any increase in the number of hotels due to the recession. That means that the hotels are able to achieve very substantial capacity, over 90 per cent bed occupancy, which is absolutely incredible.”

He called for the VAT reduction currently enjoyed by the hospitality industry to be seriously considered in the next budget.

“The danger is of course that Ireland becomes uncompetitive, particularly with British tourists who are our main stay,” he said. “My real concern is about getting a sustainable hospitality industry, and killing of the golden goose that appeared during the Celtic Tiger years. A lot of the hotels were built during the Celtic Tiger years and got extraordinary tax breaks. I think the State has to step in and ask whether they and the customer are now getting value for money, and whether it’s not appropriate to undergo very substantial tax changes. In October, the hospitality industry would want to justify why the Government should still allow that concession.”