Airbnb for silver surfers with space to spare 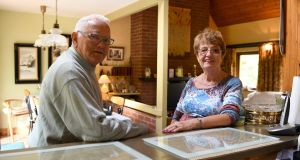 The so-called sharing economy is mostly driven by and aimed at millennials – the under-30s, broadly speaking. But a peer-to-peer travel club is aiming to get the older generation in on the act and address a social issue at the same time.

The idea for the Freebird Club came about when Peter Mangan began renting out his Kerry house via Airbnb, to make some extra income. It was his father, a retired vet who took care of the property while Mangan was working in Dublin, who ended up benefitting the most.

“He was going into his 70s, and there was no question that he was struggling with the downscaling in his work life and being a widower,” Mangan says of his father. Meeting and greeting guests gave him a new lease of life. “There were a few older couples who came, and straight away they hit it off. There were nights in the local pub, he was invited to the house for dinner, they played golf, and he took them to do some sightseeing.”

And so the Freebird Club was born. “I thought there is something that Airbnb are only scratching the surface of,” Mangan says. “If you turn up the dial on the social side, and make it about meeting people and not just finding a nice place to stay, you can tackle some of the challenges, such as loneliness and isolation, for older people.”

Loneliness and isolation, particularly after the death of a spouse, is “a real scourge, a real problem in society”, Mangan says. He thought that the sharing economy could have potential to address this issue.

Mangan was accepted to participate in an incubation programme, the Impact Hub Fellowship for Longer Lives, and did some research, including with focus groups. The older people he talked to said they “would like to travel more, but they don’t feel like they have the option, particularly if they are on their own or have lost a partner”.

Unlike Airbnb, the Freebird Club requires that hosts be present; you can’t rent out an empty house, because the social interaction is as much a part of the idea as providing accommodation is.

Mangan found that safety was another important factor for potential users, which resulted in the idea of a club. Those who want to take part pay a fee to become members. “With Airbnb they felt anyone could be on it, and they didn’t trust that. They said if it was a proper club, where you have to pay to join, they would have more trust in it.”

Bethia Tooth was one of the first guests to take part in a pilot of the Freebird Club. She travelled from her home in the UK to Co Kerry, her first trip to Ireland. Despite arriving in the middle of Storm Desmond, in December, Tooth had a “lovely” time with her hosts in Killorglin.

“It’s not just a bed and breakfast, and that’s what made me so keen on the club,” she says. “It was as if a friend introduced me to a friend of theirs. I told them about my family, and they told me about their family. We were chatting away like old mates.”

Tooth travelled to Ireland with a friend, but she says that the next time she uses the club she would be happy to travel on her own. “My husband died six years ago, and before the Freebird Club it would never have entered my head that I would go somewhere new by myself.”

There is also a social benefit for hosts, as many are empty-nesters, says Mangan. Mary and Barry Fairtlough, who were hosts as part of the pilot scheme, rented out a room in their house in Killorglin. They had two separate guests and said it was a great experience to have people stay with them.

“All our children are away abroad, and we are retired and are in a beautiful place, and we thought it would be exciting to share that with others,” says Mary Fairtlough.

Using the same model as Airbnb, the Freebird Club allows hosts to charge a fee for guests to stay in their homes. Hosts decide themselves how much to charge, usually setting a similar price to a local B&B. This additional income is important for retired people, says Mangan. “Many struggle with inadequate pensions,” he says, “and it’s a way to monetise the one asset many older people have: a house with their mortgage paid off.”

Fairtlough agrees that this is helpful and allows them to make some income from the extra space in their house. “It’s an extra few bob,” she says. “You want to make the most of the money that you have.”

The Freebird Club is a business that addresses a social need, which helped it to win the 2015 European Social Innovation Competition, run by the European Commission.

Mangan says that the business part is important to increase its effectiveness. “It is a modern-day social enterprise. It’s a for-profit business.” This, he says, will allow it to have a greater impact. But the social impact ethos “is at the very centre of what we are trying to do”.