A Walk for the Weekend: postcard-pretty views on Mount Brandon

For maximum scenic reward with minimum muscle burn, it is best to repair towards Ireland’s western seaboard 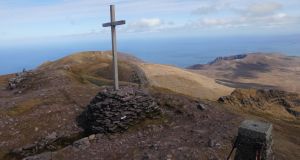 What’s your favourite mountain walk? My non-committal reply is usually that I have many: O’Shea Gully on Carrauntoohil, Mayo’s Mweelrea, Down’s Annalong Valley, Connemara’s Glencoaghan. If pressed, however, I will recommend that, for maximum scenic reward with minimum muscle burn, it is best to repair towards Ireland’s western seaboard and park close to a postcard-pretty farmhouse.

Through a couple of gates and up, a breath-robbing path that passes a Marian grotto will lead you towards a clutch of austere mountains. As you rise, a picture perfect panorama opens over a great sweep of faultlessly semi-circular shoreline, but the scenery ahead remains unremarkable. Keep the faith, however, and in its own good time, the mountain will reveal its first treasure – an unforgettable vista over the mesmeric wonders of Coumaknock.

Gouged out by ice and water, its morosely bare rock and string of paternoster lakes stretching upwards like prayer beads will make your efforts already seem eminently worthwhile.

After clinging tenaciously to steep ground, the track finally intercepts the valley floor near the coum’s great northern headwall. No ascent of these steep ramparts will appear possible, but closer inspection will reveal a weakness in the stout defences; a track labours upwards beside a rising rocky face. It’s the Beecher’s Brook of your ascent but, while not unduly challenging, it does require scrambling up user-friendly rocks.

Difficulties behind, you gain easier ground where your eyes will inevitably be drawn to the spiky austerity of the Faha Ridge, which from this angle appears like a weather-ravaged ship, moored to the eastern ramparts of the range. A well-trodden path that reaches down like a spindly arm to welcome the weary walker now leads to – you guessed it – Mount Brandon summit, where Kerry’s iconic holy man, St Brendan, reputedly celebrated Mass before commencing his trans-Atlantic voyage.

If Brandon is in a good mood, you will enjoy arresting views that have sparked the longings and imaginings of writers and poets for generation. Below, the west Kerry landscape falls away, wild and wondrous, to the outrageously photogenic Blasket Islands. But such humours are rare. Brandon is noted as a mercurial eminence that mostly hides its handsome head in mist. More likely, therefore, you will shiver your way on to the summit, enveloped by the floaty opacity of an Irish mountain mist.

Fear not, for the solution lies in a descent west using an ancient pilgrim route known as the Saints’ Road.

Initially the going is rather rocky as it doglegs below the summit and may seem a disappointing non-sequitur after the glories of the ascent. Fourteen Stations of the Cross and one incongruous pagan standing stone will, however, handrail you easily down to Ballybrack car park. And at some stage of your descent the mist will lift like a great natural theatre curtain and you will be unable to suppress a gasp. Unfolding beneath is a magical meeting of sapphire seas and shapely hills that will remain in the memory long after you have departed from Corca Dhuibhne.

Getting there: Take the N86 from Tralee towards Conor Pass. Follow signs right through Cloghane and take the second left. Park in a farmyard with limited parking.
Time: 4 hours.
Ability: Challenging terrain, be well-equipped and pre-arrange collection.
Map: OSI DS 70