A walk for the weekend: Mountain magic underfoot

This first pilgrim path will be a hard act to follow 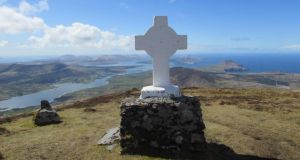 My offering this week comes from a room in the Sneem Hotel with tranquil views of the light fading over Kenmare Bay. It’s the perfect end to a memorable day when, in the company of many old friends, I ascended one of Kerry’s most compelling mountains.

Largely untouched by modernity, this mythical place of pagan assemblies and Lughnasa overindulgences has, until recently, remained aloof from the hire-cars and coaches scuttling past its muscular ramparts as they circuit the Ring of Kerry.

Increased footfall came when it was recognised in 2014 as one of Ireland’s penitential mountains. Now I have come to join a group setting out to complete the first Irish pilgrim journey of its kind while also checking the local claim that here rests Ireland’s most breathtaking vista.

Under the knowledgeable leadership of local man Johnny Keating we set out, 47 strong, on the first steps in a 120km pilgrim journey designated by the new Irish pilgrim passport.

Halfway up the mountain reasserted itself a little but then pilgrimage is a quest for slowness. Our pace dropped as the path doglegged more steeply towards the mountain’s southwest ridge.

So far so pleasant, but I still pondered what has drawn multitudes to this trail since time unrecorded. The mountain answered on gaining the ridge.

A majestic vista radiated southwest over the multiple bays and inlets around Cahersiveen and Valentia as the ocean spectacularly drowned the Kerry landmass. Floating in a surreal blue ocean was Ireland’s last stand against the Atlantic – the dreamy Skellig rocks while southwards Dursey Island clung like a droplet to the fingernail of Beara.

The summit plateau proved billiard-table-flat and was ideal to host the singing, dancing, athletic contests and merrymaking associated with the Festival of Lughnasa. It is dominated by a Celtic cross built in the 19th century by Canon Brosnan of Cahersiveen.

The highest point lay a little further on and offered an entrancing panorama over the mountains of Dingle to the surreal outline of the Blasket Islands. It proved the perfect 360 degree vista, not just beautiful but also hauntingly visceral as well. For a time everyone stood silent and intoxicated by the magic beneath our feet. Then, as we retraced our steps, there was unanimity that the four pilgrim paths to come have a hard act to follow if they were to exceed the memories that Cnoc na dTobar had bestowed .

Later having my pilgrim passport stamped in the Old Barracks, Cahersiveen, one fact seems indisputable – Cnoc na dTobar is for a clear day when the vista will remain forever stamped in the imaginings of all who reach its magical summit.

Start point: Turn off the N70 to cross the bridge in Cahersiveen and take the first right and second left. Pass St Furze’s Well and park just beyond.
Time: 3.5 hours.
Suitability: Very well-marked route but leading to a high summit that can be windy and cold.
Map: Discovery Series, sheet 83.
Pilgrim passport: Cnoc na dTobar is one of five paths forming the new Irish pilgrim journey. These must be completed to obtain an Irish Pilgrim Certificate from Ballintubber Abbey.
Further information: pilgrimpath.ie