A Walk For The Weekend: Glendalough

The following walk is well worth the effort, but it does involve two cars 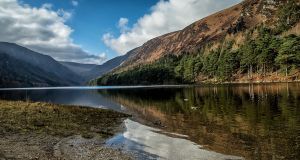 A magical September day – a blue, blue sky, the dreary summer long forgotten and a team of teenage basketball players has just finished a practice session. On a high of exercise and glorious weather, one of the girls drops to her knees beside the captain and implores her “promise me you’ll make me come out in the winter when it’s raining”.

This was a convent school basketball team and the nuns had done a good job. Where nowadays a team coach might encourage the players with the “no pain, no gain” mantra, in those days the Bible did the job. “The spirit is willing but the flesh is weak” was the slogan of the day and the girls knew it was true.

That same team captain, now a hill walker, has similar lily-livered walking companions. How do you get them out in howling winds and lashing rain when you know full well that they’ll be thanking you later in the pub, snuggled up beside a fire, nursing hot whiskeys?

The trick is to assure them that there’ll be very little climbing, they won’t have to deal with mountain summits exposed to the raging winds, that the forest will protect them from the worst of the weather and it will be a great opportunity to practise their knowledge of different types of conifers. Reluctantly most will agree to give it a go, with the odd one suddenly having to attend a family emergency.

On one of those dreadful days where the best the forecast can offer is “persistent rain clearing to showers in the afternoon” the following walk is well worth the effort, but it does involve two cars. Depending on the direction of the wind, start either from the upper car park at Glendalough or just before Drumgoff crossroads at the start of the Glenmalure Valley. Navigation is simple as you simply follow the Wicklow Way signs – the little yellow man with the walking stick.

It is easy to miss the start at the Glenmalure end so stop talking once you have passed the Shay Elliot car park and concentrate. Not more than 2.5km further on the Wicklow Way emerges from the forest right beside a little river which runs under the road. There is room to park one or two cars here.

So it is wet and windy, what’s to enjoy? Well first off the scents of the trees and the wet earth, that wonderful clean, fresh smell of pine needles and grass, moss and foliage.

Then there are the colours of winter in an Irish landscape, the red and white capped mushrooms, the vivid greens of the mosses, the silvery greys and oranges of the lichens.

As if two senses in unison weren’t enough, in come the sounds – the roaring of the wind in the trees, the gurgling and splashing of water as it races down hillsides, finding gullies and paths to make life easier and gathering pace as it flings itself over the edges of embankments.

Enter the heavies – the waterfalls. Down in Glendalough the Lugduff Brook thunders its way across giant boulders, under magnificent old oaks and scarlet berried hollies, stopping to deposit swirls of foam before joining its namesake on the valley floor.

In Glenmalure the Carroway Stick Brook takes a leap of faith and dives over the mountain side, dropping down in a sheet of white making so much noise it can be heard on the far side of the valley.

And someone’s aunt needed to go shopping? Who would want to be indoors on a day like this?

Doctors on Covid-19 frontline: ‘What I miss most is normal human contact’
5

World Carbonara Day: At the sight of the cream, I nearly fainted
Real news has value SUBSCRIBE