50 wild things to do in Ireland

Over 10 weeks, Irish Times readers have told us about the best places and ways to experience nature in Ireland. Here are a few of the secrets they shared. We will reveal the winner on Saturday

The judges meet to decide the winner of The Irish Times Best Place to Go Wild in Ireland competition, due to be announced Saturday, June 7th.

'Coasteering' is a mixture of adventure swimming, jumping and scrambling along the coastline. Shielbaggan OEC at Hook Head in Wexford show how it's done, for our Best Place to go Wild in Ireland series. Video: Bryan O'Brien & Darragh Bambrick

The Irish Times is on the hunt for The Best Place to Go Wild in Ireland, and Eoin O' Hagan nominated Lough Derg for the multiple natural resources the lake offers visitors. Video: Kathleen Harris

The wild landscape of the Ballyhoura Forest provides the perfect location for mountain biking, for our Best Place to go Wild in Ireland series. Video: Daniel O'Connor

Gorge-walking: Wetsuits, shoes, helmets and gloves on, you pick your way up a river canyon against the flow of the water. Swim in pools, haul yourself up slippery rocks, and swing from overhanging branches as you do so. One of numerous thrills available at Killary Adventure Centre in Connemara. killaryadventure.com

Electric-biking: We’ve been converted to this way of exploring the Irish countryside. All the fresh-air benefits without the hard work, and you cover more ground.

Stack-climbing: Cnoc na Mara, near Glencolumbkille, Co Donegal, is a 100-metre sea stack in one of the most inaccessible locations in Ireland. Gaining the summit is like being reborn into a world where anything is possible. uniqueascent.ie

Cave-camping: Let the rising tide of the sea seal you in to one of the dry sandy-floored caves at Maghera, Co Donegal. Do it once, and don’t be afraid of the descending night. Primal relief comes with daybreak in this magical space. 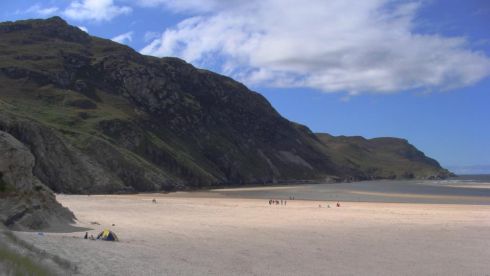 Coral Beach, St Johns Point, Dunkineely, Donegal: At the tip of one of the longest peninsulas in Ireland is a pretty little pink coral beach offering stunning views across Donegal Bay, and as far as Co Sligo. The waters around the lighthouse at St John’s Point are very popular with divers.

Old Head, Westport, Co Mayo: Suit up and have helmets at the ready – coasteering at Old Head is not for the faint hearted. Explore caves and woodlands, go rock hopping and be prepared to be physically and mentally challenged as you end your trip with a daunting cliff dive into the roaring Atlantic. adventurewest.ie

Zetland Pier, Adrigole, Cork: Trek through overgrown brambles and apparent dead ends to reach this hidden paradise which exists for only a couple hours either side of low tide and is known only to clued-in locals. Long after the sand is swallowed by turquoise waters, you’ll still have the rocks on either side of the tiny inlet to jump in from.

Copper Coast, Co Waterford: Approach its beaches and caves from the water. You don’t see half of the amazing views from the road. Experience this impressive stretch of Waterford coast from kayaks, learn some local history while paddling in and out of the caves and tunnels. pureadventure.ie 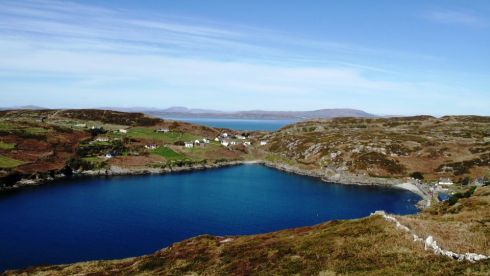 Pure Camping, Querrin, Loop Head, Co Clare: Trea and Kevin Heapes run an ecocampsite outside this small village on Loop Head, where you can pitch your own tent or stay in one of the pre-erected bell tents. purecamping.ie

Cladagh Glen, Co Fermanagh: Pitch your tent by the wooded glen beside the Cladagh river which carves its way from the Marble Arch caves through the limestone rock of this woodland paradise. Follow the walking trail to the scout centre, with toilet, barbecue and campfire facilities. cladaghglen.com

Mongolian Yurt Camping, Cape Clear, Co Cork: Take the 45 minute ferry trip from Baltimore out to Cape Clear, where you can rent a cosy yurt. yurt-holidays-ireland.com

Gorumna Island, Galway, in a Chausson campervan: Connected to the mainland by the Béal an Daingin Bridge, one of our readers’ entries made this trip an enviable one. From Omey to Claddaghduff, from Cleggan to Inishbofin – fuchsia laden hedges and deep warm evening swimming at the piers – who needs Greco-Roman shores when island hopping is available here outside our doors? 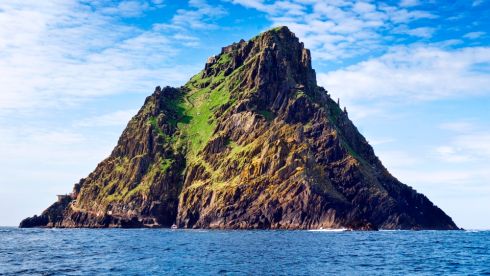 Dursey Island, Co Cork: A cable car connects this island off west Cork to the mainland and the journey is as exciting as the island. No shops, pubs or restaurants.

Skellig Michael, Co Kerry: An ancient settlement of beehive cells in stone on a daunting sea stack. Reach it from Port Magee on a ferry which takes only 25 minutes.

Inishturk Island, Co Mayo: Famous for its picturesque GAA pitch which clings to its shoreline, this is among our most remote inhabited islands. The cliffs rival Co Clare’s Moher, the fresh lobster from the community centre is excellent, and the diving is some of the best in Europe. Ferries from Roonagh Quay. 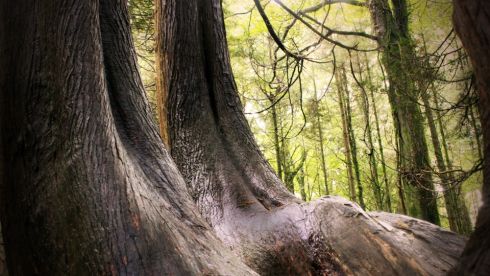 Fairymount Farm, Ballingarry, Roscrea, Co Tipperary: Take the Heritage Walk in this organic farmyard setting and let it lead you up a hill through cowslips, hawthorns and the 150-year-old oak wood, until you reach the ancient Crannog on Lough Nahinch. fairymountfarm.com

Templemore Town Park, Co Tipperary: Built around a perch-filled lake, this park offers playgrounds and “fairy trails” for the young, and peace under the canopies of mature oak and beech trees for everyone else.

Ballycarton forest, Co Derry: Climb the Ballycarton forest hills on a mountain bike on a clear winter night with a head torch to enjoy unrivalled views of the night sky and the ripple of the Foyle river. 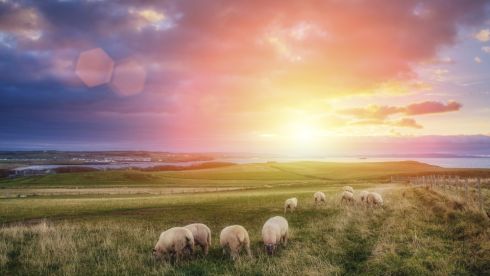 FIVE REGIONS THAT HAVE IT ALL

Some people like to experience nature and get their adrenalin rush at the same time. Others prefer to get away from all. In these spots, you can do both: 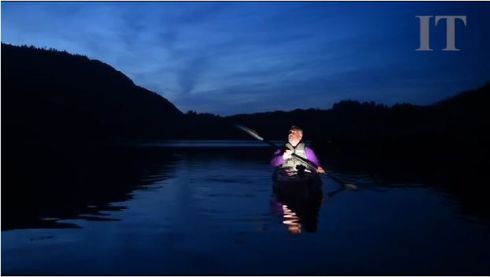 Night kayaking, Lough Hyne, Co Cork: Late at night on Lough Hyne, you can look up at a bright, clear Milky Way. Look down, and any movement of your hand or paddle in the water produces a matching Milky Way among the phosphorescent plankton in the water. You can snorkel through the rapids by day, watching various fish, seaweeds, starfish and mussels rushing past you. atlanticseakayaking.com aquaventures.ie

Coasteering: Tog yourself out in wetsuits, boots and helmet and take a guided tour of the rocky shoreline, with some cave exploration and cliff jumping thrown in. Available in Strandhill, Co Sligo; Achill and Clare Island, Co Mayo; Kenmare, Co Kerry; among others. Our videographers tried it in Hook Head, Co Wexford with Shielbaggan Outdoor Education Centre. shielbagganoec.com

Kayak in Cavan: A guided two-hour trip is a marvellous introduction to Lough Oughter. You’ll see the landscape and lakescape much as the first human inhabitants might have seen it from the dug-outs that have been found nearby – glittering water, wooded drumlins, pristine atmosphere. cavancanoeing.com

The brand-new Blueway: Be captivated by exotic sea life on this series of marine trails in Mayo and Galway: Killary, Mannin Bay, Inishbofin, Louisburgh and Achill. Each canoe or kayak trail is 10 to 15 kilometres long; the snorkelling trails are one to three kilometres. A series of “taster days” take place on Sundays this summer, including at Killary, Co Galway, tomorrow. blueway.ie

The Clear Lake, Slieve Bloom Mountains, Co Laois: The Clear Lake is about 15 metres in diameter and sits in the middle of a bog off the Gortnameale Eco Trail walk, on top of one of the highest peaks of the Slieve Bloom Mountains. It is known only to locals and tour guides, and it is unknown how deep the lake is, or how it came to be there with no streams or drains running into it. 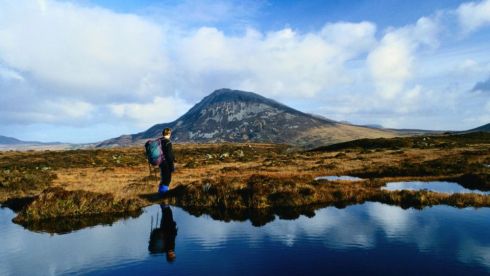 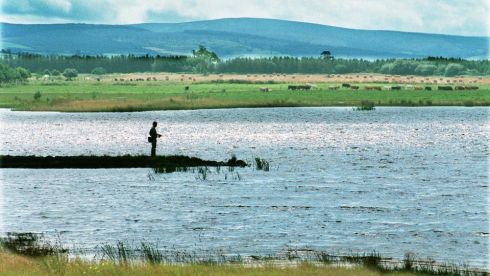 Barrow Valley and Blackstairs Mountains, Co Carlow: The river Barrow cuts slowly through the area; nearby is the rugged Mount Leinster, and the Blackstairs Mountains. The five-mile walk or bike ride by the Barrow river has a well maintained path. blackstairsecotrails.ie gowiththeflow.ie

The Comeragh mountains: If solitude defines wilderness, there are few places in Ireland that give you such a good chance of being totally alone within a few minutes of leaving the road as this small mountain range. The very distinctive coums offer a remarkably remote atmosphere. comeraghswild.com

Killarney National Park: You can take a train to Killarney, and walk straight into the national park from the town, and from there walk, or rent bikes or kayaks. Nathan Kingerlee sums up the atmosphere. “Yourself, your kayak, red deer, sea eagles, numerous dotted islands, limestone caves and ancient monastic ruins. This is my favourite place in the world; and you should see the sunsets over Dingle Bay from a kayak on Lough Lein.” outdoorsireland.com

Lough Derg: Angling in Lough Derg during the Mayfly season is a must for fishing enthusiasts looking for the wild brown trout which turns up at the beginning of summer. Plus, you can enjoy a variety of watersports and cruising. 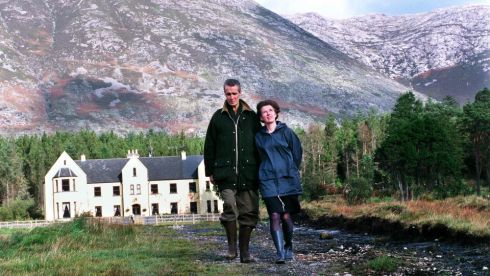 FIVE PLACES TO CALM DOWN AFTER GOING WILD

The Wild Honey Inn, Lisdoonvarna, Co Clare: Informal pub atmosphere but with food said to be approaching Michelin star standard. They have bedooms too. wildhoneyinn.com

Step House Hotel, Borris, Co Carlow: One of the best small hotels in the country, with a restaurant any five-star would be delighted to call their own. A gem, and great for the Barrow Valley. stephousehotel.ie

Talbot Hotel, Belmullet, Co Mayo: Lovely boutique hotel in the middle of Belmullet, one of the most remote parts of Ireland. Hotel and restaurant have become a destination for weddings, hen parties. thetalbothotel.ie

The Books Quiz: What is the name of Hilary Fannin’s poignant 2015 memoir?

The North: ‘Riots stopped because Prince Andrew or Philip or something – he’s dead’

Save our skin: Four of the best SPFs around

Paul Flynn: Relaxed dinner that reflects my soft spot for the spice bag

Planning to revamp your home? Be inspired by the 'world’s best' interior designers

‘They were putting up photos of girls nude from the neck down, insinuating it was me’