10 of the best Irish bars in New York

A New York Irish pub may have been voted best bar in the world but ‘old country’ pubs are in decline in the Big Apple. Here are some classics and others reviving the tradition 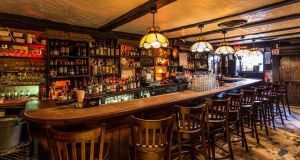 'Molly’s is a very traditional pub, and one of our strengths is that we don’t change'

In some New York neighbourhoods every other bar seems to be either Irish-themed or Irish-owned. In a city that remains the spiritual home of the Great Irish Bar, the challenge becomes how to sort the genuine from the fake. There are plenty of shamrock-ed bars to drink in, with all kinds of Blarney-fied names, but links to Ireland are often flimsy.

It’s partly for this reason that the Irish bar in New York is in decline, a social staple being squeezed out as Guinness sales fall in favour of American craft beers and diners move away from traditional bar food to more gastropub grub, along with the usual cycle of rent increases and gentrification. Some say the traditional Irish New York pub is simply falling out of fashion; others argue that a vibrant new generation is emerging. Here, then, is a Manhattan top 10 that exemplifies both the survival and the revival of the great New York Irish Bar.

McSorley’s has long claimed to have opened in 1854 and to be the oldest pub in New York (both of which are debated). Really, though, it is not so much a bar as an East Village institution – and the one New York Irish pub most people have heard of. Its owners since 1977, the Maher family, are stubbornly proud of its history and authenticity, and the fact that the bar remains almost impervious to change. The busy interior, with its portraits, posters, paraphernalia, stovepipe and sawdust floor, is pretty much as it was a century ago; women were only allowed access to the “gentleman’s preserve” in 1970, and the only beer its jacketed waiters serve is McSorley’s own light and dark house ale – at $5.50 for two eight-ounce mugs. (The bar’s motto is: Be good or be gone.) Food is similarly unambiguous: sandwiches for $5, burgers $6.50.
15 East 7th Street, mcsorleysoldalehouse.nyc

Take a quick hop across Cooper Square from McSorley’s and you’ll come to 4th Street and the NoHo tavern that many think kickstarted a new era of Irish bars in the city: Swift Hibernian Lounge. Created in 1995 by 30-year-old, Co Laois-raised entrepreneur Danny McDonald as an antidote to the traditional Irish bar, Swift is resolutely shamrock-, leprechaun- and even television-free. It celebrates the literary (it’s named after Irish writer Jonathan Swift), is timeless (Hibernian note, not Irish), and convivial (lounge, not pub), the sort of place that has seen, from its backroom pulpit – salvaged from the Co Meath church where Swift served as a vicar – anything from readings by Frank McCourt to DJ sets. There is Guinness, Smithwick’s, and Irish whiskey cocktails, plus late-night Irish music sessions on Tuesdays – and even that American idea of Irish food, corned beef and cabbage (served in tacos).
34 East 4th Street, swiftnycbar.com

“Molly’s is a very traditional pub, and one of our strengths is that we don’t change,” says one of the Gramercy Park bar’s partners, Peter O’Connell, originally from Co Meath. “We’re like narrow trousers: we were in, out, and now we’re in again.” Designed to resemble an illicit rural Irish shebeen from the 1950s, with a whitewashed frontage, low ceilings, sawdust floors and wood-burning fire, the inviting and dimly lit interior and, importantly, most of the no-nonsense staff, have been a constant for the past 30 years or more. Molly’s has a range of Irish beers on tap, from Guinness, Smithwick’s, Harp and, unusually for an Irish bar in America, Murphy’s – all served “to Irish standards” in pint glasses rather than American 16oz size. Traditional bar food is available till late: lamb stew, shepherd’s pie – and 10oz burgers (from $14), considered some of the best in the city.
287 3rd Avenue, mollysshebeen.com

This “forward-thinking 21st-century Irish bar” in an 1828 building in the Financial District opened in 2013; just three years later it was awarded World’s Best Bar by Drinks International magazine. Created by two star bar-managers from Belfast, Jack McGarry and Sean Muldoon, the Dead Rabbit takes a time-honoured tradition of hospitality, a sense of history and young, dynamic staff and turns them into a modern Irish bar that is accessible, irresistible, even fiercely romantic. The long, narrow ground-floor Taproom can, with some justification, claim to serve “the best Guinness in New York”; it has the largest collection of Irish whiskey in the US, at more than 180 bottles; and it does proper, hearty daily specials such as lamb stew ($22) prime rib ($33) and, of course, braised rabbit ($21). An elegant upstairs Parlour offers 30 pre-prohibition-inspired cocktails ($16) with names such as Switchblade, Hush Money and Hunky Dory.
30 Water Street, deadrabbitnyc.com

This old-style neighbourhood bar in Midtown East’s Kips Bay really does feel like a pub in the west of Ireland, complete with committed drinking, easy-flowing conversation, well-worn upholstery and legendary nightly live music – from Irish trad to bluegrass jams. Opened in 1986 by its manager, Cavan-born Steve Duggan, and folk singer Paddy Reilly, the pub was renowned as “the world’s first and only all-draught Guinness bar”; no other beer was entertained. “Ever-changing demographics and subsequent demand” caused a revolution last year, when “four rotating taps” of beers such as Stella Artois and Two Roads IPA were introduced. Still, Paddy Reilly’s remains the real deal: last time we visited, Chris Noth (Big from Sex and the City) was drinking at the bar, while a seven-year-old boy prodigy sang a stirring version of The Wild Rover.
519 2nd Avenue, paddyreillysmusicbar.us

Named after long-running chat show, this hip Lower East Side bar is so next-generation that it even eschews Guinness by the pint – the stout is served with crème de menthe, over ice, in 12oz goblets, with a sprig of mint (it is pretty much as unpalatable as it sounds). Opened in 2014 and owned by 30-year-old Dublin-born nightlife promoter James Morrissey, the “vintage-yet-cosmopolitan, sophisticated-but-edgy” Late Late is designed to resemble a kitsch 1960s Irish home, complete with period wallpaper, family photos and a statue of the Virgin Mary. Bar food includes Tayto crisp sandwiches and cheese toasties (both $8); cocktail creations feature a $14 Irish coffee made with Jameson Black Barrel. The basement “living room” transforms into a late-night club space.
159 East Houston Street, thelatelate.com

This buzzing West Village bar, on fun and funky Carmine Street, is the place to go if you’re craving the classic American sports bar experience – with a strong Irish twist. Mr Dennehy’s is owned by Donal Dennehy from Cork, and houses a restaurant serving standard pub food such as shepherd’s pie ($16) and Guinness-battered cod and chips ($17). It comes in to its own, however, for major sporting occasions, especially Premier League football games, when the pub opens in the morning and stalwart fans – the bar is home to Everton supporters in New York – watch matches on one of six screens while tucking into full Irish breakfasts ($15). In good weather, celebrations continue in the bar’s outdoor cafe on 7th Avenue, cheekily known as Mr Dennehy’s backside.
63 Carmine Street, mrdennehys.com

A little further up 7th Avenue, bookended by a tattoo studio and a sex shop on a somewhat more bohemian Greenwich Village street, is “unpretentious Downtown Irish pub” the Four-Faced Liar. Named after the out-of-sync clock faces of St Anne’s Church, Shandon in Cork city (birthplace of owner and manager Conor O’Sullivan) the low-key, laid-back bar may have had two bold leprechauns painted on its large front windows last time I passed – yet everything else is markedly more restrained. The interior is classic New York Victorian: tin ceilings, mahogany tables, sconces, wooden floorboards and panelling. The Guinness is (yet again) “the best in town”, the live music sessions and poetry readings are casual and occasional, and the food non-existent. Hell, it’s very nearly an Irish dive bar.
165 West 4th Street, thefour-facedliar.com

It’s a long way over on the wild, wild West Side, right on the edge of Hell’s Kitchen, and just one block from the popular Intrepid Sea, Air and Space Museum, yet the historic Landmark Tavern is well worth the journey. Opened in 1868 and now owned by Corkman, Donnchadh O’Sullivan from Skibbereen and Michael Younge from Nenagh, Co Tipperary, the former speakeasy and dock workers’ saloon has an elegantly renovated interior of inlaid tile floors, tin ceilings, lead-paned windows and a long mahogany bar. It serves Guinness and Smithwick’s on draught and some of the best gastropub-style food in any Irish bar in New York – from classics such as Irish bangers and mash ($15) to a lobster ravioli starter ($13) and Long Island duck breast ($24). There are well-attended Monday night Irish traditional music sessions in the dark and atmospheric back room, too.

Peter McManus, from Co Longford, first opened a place in Hell’s Kitchen in 1911, moving his bar to its current corner spot in Chelsea, post-prohibition, in 1936. The much-loved neighbourhood Irish bar is now run by Peter’s great-grandson, Justin, and boasts that it is “the oldest family-run bar in New York City”. There’s a warm and welcoming front room, with a tin ceiling, terrazzo floor, wood panelling, a carved mahogany bar, two working wooden phone booths and three Tiffany stained glass cabinets – one with a bullet hole from an attempted robbery in the 1970s. A more functional back dining room offers simple yet tasty American classics, such as strip steak ($26.95), roasted turkey ($16.95) and (award-winning) burgers (from $11.25). Guinness, Magner’s Irish cider and McManus’s own house ale are on tap; there’s also a fine selection of Irish whiskies.

Irish in Italy on coronavirus: ‘The city is in a bit of panic – the streets are empty’
10