The Zen approach to sheep control in 1970s Ireland 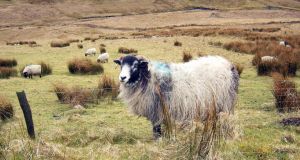 Sheep in the Mourne mountains

I went to visit Little Lotus last week. It was late in the evening, and she was at supper with her partner and child. As I came in the door they were finishing off plates of rice, vegetables and pork belly that had been cut into tiny cubes and steeped in soy sauce.

The infant was sucking a prawn. She is one year old and sits in a crawling vehicle, a contraption with small wheels that suspends her in an upright position and gives her the freedom of the kitchen floor.

She scooted over to me, with her arm outstretched and a half-eaten prawn in her fingers.

I was surprised to see a child so young offer food to a stranger, and at first I refused.

But her mother insisted I take it. And although I’m not a prawn fan, especially when it comes half-chewed from the mouth of a baby, I sucked it for a moment and returned it, all on the mother’s instructions.

She explained that in China, parents encourage children to share their food with guests who might walk in, so that they learn from an early age that eating is a communal event and that food is not something you keep to yourself.

Not that the influence of foreign culture on Irish society is a new thing. I knew farmers back in the 1970s who could recite the names of five different bars in Brooklyn and the cargo capacity of a B52 bomber.

Years ago I knew a mountain man in his 60s who could outpace me on any hill.

“The top of the mountain is the goat’s path,” he always said. “If you find the highest track you’ll find the best way across.”

He had legs like a mountain goat, and wore a long, black coat and carried fodder on his back halfway up Cuilce, and sometimes after I’d finished teaching school I’d accompany him “out the hills” as he put it, to see his sheep.

“How do you control sheep?” he asked me one day.

“Make sure the field is big enough,” he said, and then he fell back into the purple heather in fits of laughter.

“You’re mad,” I said, which was a compliment in those days.

When he died, his old Fiat car seized with rust, and the cottage was enveloped in darkness. I struggled to find it one day in the middle of a forest that had been planted all around the cottage after he died, and I had to wipe cobwebs off the window just to see inside. The oilcloth was still on the table, a deck of cards spread across it. Broken delph lay on the dresser and a single upturned shoe lay on the flagstones beside the black Stanley range.

But the dust had sucked the colour out of everything; even the sacred heart on the wall was grey, and outside the young forest had blocked the sun that used to beam on his freckled face when he sat outside the front door listening to the radio in summer time and watching small birds shaking the fuchsia bushes around him.

Zen in the field

Last summer I was reading a book on Zen by a Japanese author.

“How do you control sheep?” was the question the Zen master posed at the beginning of chapter three. In the next paragraph was the answer. “Make sure the field is big enough.” I checked the title page, and sure enough, the book was first published in the early 1970s.

It had never occurred to me that someone in rural Ireland might have been passing the winter with books on Zen at a time when I was driving a Cortina around Blacklion and obsessing on the short skirts of young women in the Ballroom of Romance in Glenfarne. But looking back now, I suppose there was nothing unusual about that. Rights of Man by Thomas Paine was hidden in hundreds of cottages in the 19th century, away from the eyes of priests, and was read aloud beside the fires in that long-ago world where literacy was prized as a kind of code to the wisdom of other worlds.

Moreover, even in the 1970s there were still unschooled old men who prized books that came across the ocean from the descendants of those very same emigrants who had cherished Thomas Paine a few generations earlier.

I suppose you can never measure the value of foreign culture or the specks of wisdom that come to us from other worlds, as delicate as a tiny prawn in the hands of a child.