The week’s news, from Ronaldo’s bust to Theresa May’s legs 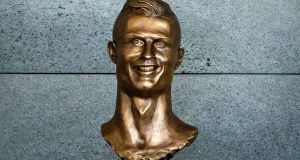 Michael Healy-Rae The Independent TD told Radio Kerry that he had learned a valuable lesson after he nearly choked on his dinner last weekend. His air passage became blocked and his fingers and lips turned purple, requiring emergency treatment. He vowed to take more care while eating.

Donnacha Ryan The Munster secondrow has made the best of a bad situation. After the IRFU refused to offer him a new contract, the Tipperary native signed for the French club Racing 92 – and is set to earn about €300,000 a season on a two-year contract.

Nóirín O’Sullivan The beleaguered Garda commissioner faced yet another nascent force scandal this week, this one over finances at the Templemore Garda training college. With Fianna Fáil refusing to offer its support, doubts grow over her position at the head of the force.

Emanuel Santos There is a special place in our hearts for really bad art, and this week the world found its newest piece of overambitious creativity to deride (or celebrate): a bronze bust of Cristiano Ronaldo, which was unveiled in the soccer star’s native Madeira, inspired much hilarity, though Santos, its creator, insisted Ronaldo was happy with result.

GIVE ME A CRASH COURSE IN . . . IAN BAILEY AND EXTRADITION

The English journalist Ian Bailey was back in the news this week. What was that all about?

Ian Bailey was involved in two separate court appearances this week. On Tuesday and Wednesday he was at the Court of Appeal to argue that he should have won his High Court action of 2014-15 for what he claimed was wrongful arrest and a conspiracy by various gardaí to frame him for the murder of the French film producer Sophie Toscan du Plantier, in west Co Cork, in 1996. Bailey denies any part in the murder. Then, on Thursday, he attended a High Court hearing where Mr Justice Tony Hunt endorsed a European arrest warrant, issued by France, for his extradition to answer a charge of the voluntary homicide of Toscan du Plantier. The court’s endorsement of the warrant resulted in his arrest by Det Sgt Jim Kirwan.

So France is seeking to extradite Bailey. Haven’t we heard all this before?

Yes. Back in 2010 the French issued a warrant to have Bailey surrendered to them. Although the extradition request was approved, by Mr Justice Michael Peart, in the High Court in 2011, Bailey’s lawyers successfully appealed it to the Supreme Court, which in March 2012 overturned the High Court decision and stopped the extradition.

Why are the French coming back a second time for his extradition?

One of the grounds on which the Supreme Court ruled against Bailey’s extradition was that the first French warrant didn’t clearly state whether the extradition was for the purpose of charge. The new warrant would appear to overcome this hurdle by stating that it is for the purpose of being indicted for Toscan du Plantier’s voluntary homicide. But the court also ruled against his extradition because of a lack of reciprocity between French and Irish law. France claims extraterritorial jurisdiction when French citizens are the victims of crimes abroad, but Irish law claims this extra reach only when an Irish citizen is accused of a crime outside Ireland. And as Bailey is British rather than Irish he can’t be extradited, because there is no reciprocal equivalent in Irish law to the French law.

Is that the end of the matter?

Mr Justice Hunt’s endorsement of the warrant for Bailey’s arrest this week was simply procedural. After Bailey’s arrest – he has since been released on bail – the case was adjourned for a full hearing. His lawyers will rely on the Supreme Court ruling about reciprocity to prevent his extradition. It’s difficult to see how lawyers for the Minister for Justice can get around the reciprocity issue and argue for his extradition, but it’s a case that has had many twists and turns over its 20-year history. It would take a brave person to predict that it will include no more surprises.

What do the French think of it all?

Alain Spilliaert, a lawyer for Sophie Toscan du Plantier’s parents, Georges and Marguerite Bouniol, and her son, Pierre-Louis Baudey-Vignaud, had hoped that the High Court would refuse to endorse the arrest warrant, as he believes what might now follow is a two-year legal battle that the Minister for Justice cannot win because of the Supreme Court ruling. Had the warrant been turned down, the French authorities could have tried Bailey in absentia. Any trial will now be delayed because of the impending High Court contest and a possible subsequent Supreme Court appeal about Bailey’s extradition. Barry Roche

“We are leaving the European Union, but we are not leaving Europe – and we want to remain committed partners and allies to our friends across the continent”

“The 1950s called and asked for the headline back”

“If I really wanted to I could have snuck on to the ground late at night, and probably nobody would have seen me, but I wasn’t trying to hide”

Ivanka Trump’s federal salary in her new role as an official adviser to her father, President Donald Trump

Average price of a three-bed semidetached house in Dublin, a rise of €15,000 in the past three months, according to REA figures

1: Maureen Dowd: Dear Donald, you were just played for a sucker

4: Brexit: ‘Hands off Donegal and give us our six counties back’

6: Poor visibility slows search for missing helicopter with five on board

9: ‘I told my male colleagues about my sex life and am being ridiculed’

On Wednesday Minister for Health Simon Harris announced that standardised packaging of tobacco products will come into force from September, with different cigarette brands all coming in generic dark-green boxes featuring graphic images of tobacco-related diseases. Tobacco companies will have a year’s “wash through” to sell all their old stock.

The move has been a long time coming. Former minister for health James Reilly introduced a Bill covering the measure in June 2014, and President Michael D Higgins signed it into law in March 2015. The new packaging was due to be mandated since last May, but it was put on the long finger after the election last year and is only now being introduced.

The current smoking rate in Ireland is 19 per cent, and the Government is aiming for a rate below 5 per cent by 2025.

Australia was the first country to introduce plain tobacco packaging, in 2012. The delays here meant that the UK and France beat us to the punch in Europe, with many more countries in the process of doing so as legal challenges are surmounted.

Still, how effective is plain packaging?

With just five years of data, the evidence suggests it does have a positive effect. An Australian government report attributed 25 per cent of the accelerating decline in smoking in the three years after the move to the new packaging regulations.

The evidence suggests the plain packaging is not merely effective at scaring or disgusting smokers into quitting. Much of the benefit comes from deterring young people from taking up smoking in the first place.

So perhaps more important than the images of diseased smokers is the “debranding” effect of standardised packaging. The well-established impact of tobacco packaging as a form of brand advertising in its own right is removed by the use of uniform colour and typography.

For young smokers in particular, the signalling effect from smoking one brand over another is largely lost when every pack looks the same. Davin O’Dwyer