The Week: Arsene Wenger, Merkel, Trump, Brexit and the Sisters of Charity bow out

Will the Tiger Woods arrest change attitudes to driving on drugs? 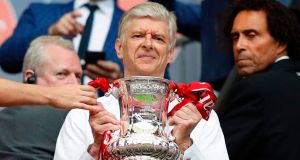 After a tumultuous season that saw his 20-year tenure at Arsenal in doubt, the Frenchman won his seventh FA Cup in thrilling fashion against champions Chelsea last weekend, and was rewarded with a two-year contract.

The Northern Irish poet was this week named as the winner of the prestigious PEN Pinter Prize 2017, which was founded in memory of Harold Pinter in 2009. Longley joins illustrious company. Previous winners include Margaret Atwood, Salman Rushdie and Tom Stoppard.

The US comedian went for ill-advised shock tactics with a video depicting her and the mock decapitated head of Donald Trump. It’s not clear where the supposed humour lay, but it succeeded in uniting opinion in condemnation at the stunt.

The revelation that intercounty player O’Sullivan had served a suspension for testing positive for performance-enhancing drugs last year cast a pall over the Kingdom’s preparations for this year’s championship, and raised bigger questions about the use of drugs in the GAA.

1 “The times in which we could completely depend on others are, to a certain extent, over. I’ve experienced that in the last few days. We Europeans truly have to take our fate into our own hands.” Angela Merkel signals the transatlantic global order is at risk in the age of Trump and Brexit.

3 “Illegitimi non carborundum” Enda Kenny offers some colloquial Latin to the men vying to succeed him.

4 “Although the Sisters of Charity no longer have any direct involvement in the provision of healthcare services we remain dedicated to preserving the legacy of Mary Aikenhead, whose mission in life was to heal and care for the sick and poor” The Sisters of Charity in a statement confirming they will withdraw from running hospitals in the wake of the National Maternity Hospital saga.

The Week in Numbers

3,517 – Number of working-age asylum seekers in direct provision centres who are now entitled to work after a Supreme Court decision

64% – Fall in the number of teenage pregnancies since 2001, according to the HSE.

Question: Will the Tiger Woods arrest change attitudes to driving on drugs?

If that bleary-eyed mugshot suggested Tiger Woods had been drinking heavily at the time of his arrest for driving under the influence in the early hours of Monday, then the video released by Florida police showing the golf star being asked to perform a sobriety test by officers after they woke him up at the wheel was even more damning – the golf star’s speech was slurred and his movements were wobbly.

He certainly appears to have been extremely drunk, but a breathalyser confirmed what he told police officers – he hadn’t been drinking. Instead, as his apologetic statement stressed the next day, he had experienced a strong reaction to a combination of prescription medicines.

“I didn’t realise the mix of medications had affected me so strongly,” Woods said in his statement, telling police he had taken four prescription drugs, including the highly addictive painkiller Vicodin and two types of anti-inflammatories banned in the US.

The Woods case is only the most high-profile instance of the rising problem of drug-impaired driving in the US. A report in April by the Governors Highway Safety Association suggested that 43 per cent of victims of fatal car crashes were found to be on drugs, either prescription or illegal, compared to 37 per cent found to have alcohol above the legal limit.

The author of that report couldn’t confirm the link between that increase and the opioid epidemic that has seen deaths from opioids quadruple in the past 20 years, with an estimated 14,000 deaths related to prescription opioids in 2014.

The incidence of painkiller prescriptions is markedly higher in the US than anywhere else in the world – it is estimated some 80 per cent of the global opioid prescription supply is consumed in the US.

Just like here, tolerance for drunk-driving is falling in the US, with younger drivers far less likely to drink and drive than previous generations. However, that same awareness is not yet widespread about prescription drugs.

Unfortunately, the advice to avoid operating heavy machinery after taking many of these drugs doesn’t seem to apply to cars, in many people’s minds.

‘I felt something furry move under my hand. Man alive, I am terrified of rats’
2

Readers on overseas travel: ‘I am responsible enough to go and manage the risk of Covid’
8

Irish holidaymakers have been thrown under the bus
9

Okay. That’s it. We can’t do this working from home – aka parenting from work – any more
10

5:18 Our Test Drive: the Renault Captur