Many women in Ireland are using medication to induce abortion, but the tablets are not always safe. Would the proposed Protection of Life During Pregnancy law put women in even greater danger? 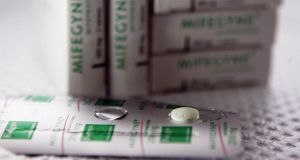 Every week women in Ireland order pills on the internet to end their pregnancies. Already, more than 4,000 women travel to British clinics every year for abortions. Now a large number are taking a different journey with the click of a mouse.

Taken at home in the first nine weeks of pregnancy, the mifepristone and misoprostol pills, which cost about €90, cause medical miscarriage – if the pills received aren’t bogus.

In May this year “Louise”, who was a student when she became pregnant, told The Irish Times of her experience of ordering the drugs from Women on Web, a Netherlands-based organisation. Louise took them at home in her rented accommodation.

In March last year another student, new to Ireland, shared her experience of using pills she had ordered online. “When I took the second pill I was very sick for most of the night, and I was in a lot of pain. Afterwards I was bleeding for a week.”

She said inducing her own abortion in this way, without travel, cost less. “I can’t afford to go to the doctor. I was just able to pay for the pills but had to sacrifice food.”

The procedure is legal in other countries, according to Mary Favier, a Cork GP who belongs to Doctors for Choice. “The majority of first-trimester abortions in UK clinics, for example, are medical abortions using these tablets. So it’s a standard procedure, it’s acceptable and it’s considered safe.”

Between January and May this year 194 pills were seized, according to the Irish Medicines Board and Revenue. More have come through undetected; pregnant women often provide an address in Northern Ireland from where they pick them up.

The Irish Family Planning Association believes there has been an increase in the practice. It says that at one of its Dublin clinics three women presented in the first three months of this year for aftercare, following such attempts to induce an abortion. Many women who buy these pills online do so because they are vulnerable, financially or in other ways; the cost is a tenth that of travelling to Britain to have an abortion.

“The women who choose to do this are those in very difficult situations,” says Sinéad Kennedy of Action on X, a pro-choice group.

“Often they are not capable of travelling, even for a short period. They might have other children, they may have family commitments, they might not be able to take time off work and, for most people I know, finances are a big concern.”

Other situations include asylum seekers or undocumented migrants, unable to get a visa to enter the UK.

There’s a big difference, though, between women being given these pills at British clinics under supervision and those ordering them online to take at home alone.

“That’s the difficulty here. Irish women are taking these tablets, presuming they get active tablets and not dodgy ones, without any support. They don’t have a telephone service. They can’t talk to their doctors, and they are very vulnerable.”

It is a difficulty that some feel will be compounded if the new Protection of Life During Pregnancy Bill is passed without amendment. Section 22 says that to “intentionally destroy unborn human life”, even in the very early stages of pregnancy, is an offence for which a woman is liable to imprisonment for up to 14 years.

Alison Begas, chief executive of the Well Woman Centre, says that the centre does not support the online ordering of abortion pills and that the legislation may deter women who have taken them from seeking help.

Dr Sam Coulter-Smith, the master of the Rotunda maternity hospital, identifies some of the medical complications that can arise. “Bleeding in early pregnancy can, on rare occasions, be a real problem and can make someone very sick. There are situations where people have died as a result of it. This is rare, but it can happen. The last thing you would want is for someone who needs assistance not to seek it.”

Favier agrees. “Women have enough issues going to a doctor seeking medical help following self-induced termination, never mind now thinking that they are basically putting their hands up to a criminal sanction that brings with it a risk of 14 years in jail. It’s really quite extraordinary.”

The HSE is investigating allegations that some pregnancy-advice agencies it funds advised women how to smuggle the abortion pill into the Republic and told women to hide such abortions from their doctors. So, even before the threat of a 14-year sentence, women and their counsellors are wary of seeking medical help.

Confidentiality
The Bill also raises issues of medical confidentiality. “We have come across some patients who have met some very judgmental medical staff,” Favier says. “Any service within a practice should be confidential, but you never know who might potentially see correspondence, who might get copied on referral or discharge letters that [might prompt somebody to] say, ‘Well, I know they have committed a criminal offence. I’m going to report them.’ ”

The Irish Family Planning Association is calling on the HSE for “clear guidelines for hospitals on the reporting of women to the Garda”.

Caroline Simons, legal consultant to the Pro Life Campaign, downplays the significance of the 14-year sentence, saying it is “not very different” from the existing section 58 of the Offences Against the Person Act. She says doctors have no reporting duty under the Bill and that it is “unusual” to see prosecutions against women in relation to abortion. “There is nothing different from the current regime. It is still a crime.”

Women on Web says it will continue to provide abortion pills to women in Ireland, despite the threat of the 14-year jail sentence if they are caught.

“Women around the world make informed decisions and safely use mifepristone and misoprostol,” it says. “It is humiliating and degrading to claim that women in Ireland should not have the same capacity. We have been in touch with many women in Ireland and Northern Ireland, and we will continue to do so.”

Why we need to talk about deprescribing
4

Dyspraxia: When the brain takes the ‘scenic route’
5