Our group of 10 reviewers, aged five to 11, give their verdict on the top 10 toys for Christmas

Our group of young reviewers, aged 5 to 11, give their verdict on the top ten toys for Christmas, as chosen by the Toy Retailers Association. 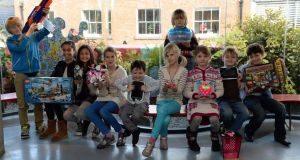 We brought a group of budding journalists to the Ark children’s cultural centre in Temple Bar in Dublin to tell us what they thought of this year’s top toys, as chosen by the Toy Retailers Association. view the video above and then read the full reviews below.

Sean Ó Cúin (6) says: “It was really great fun and I loved sending text messages to my dad on his iPhone. The video and camera were great too and I really liked the colouring games. There are lots of other games but my dad wouldn’t buy them.”

Dad says: “The texting was fun. It only works when we are both are on wifi which is good or I would have had him texting me all day. It’s very sturdy with lots of potential for upgrading. The wishlist lets you know what games your child would like. It’s a useful feature for birthdays but also persistent – he added a lot of things to it.”

Robofish Reef Series 1
Why own a live fish when Robofish can do it all and doesn’t need feeding or cleaning? Comes with a lifelike clownfish and tank and is the first of a range of collectible robot fish; zururobofish.com, €18.99

Turlough McDonnell (5): “I liked it a lot. It was like having my own fish and the bowl was big enough for my other robofish. There are lots to collect.”

Mum says: “It was a bit like a real fish except without all the cleaning to do. Good clean fun.”

Furby Boom
Furby Boom is a reboot of the original – just as cute but now fully integrated with an iPad or Android tablet. It can have a shower, go to the toilet, eat and drink, lay eggs and hatch Furblets. Children especially like to teach it its name and how to speak. If your child has a friend with a Furby Boom they will greet each other by name. hasbro.com, €72.99

Muireann McDonnell (8) says: “The Furby is great. I speak some Furbish. It sings and talks back to you and can lay eggs on your iPad or iPhone and hatch lots of baby Furbys.”

Mum says: “Lots of fun but it doesn’t have an off switch so be prepared for lots of nonstop Furbish chatter on long car journeys.”

Nerf N-Strike Elite Rapidstrike CS-18
With a shooting range of more than 15 metres, the Nerf N-Strike has a detachable, transparent cartridge that holds 18 darts and a moveable shoulder stock. Sightlines and styling are bright and accessible, just like the original of this popular series, and an acceleration button powers up the cartridge for rapid-fire fun. nerfelite.co.uk, €47.99

Phelim McDonnell (11) says: “I liked it a lot but I lost lots of the cartridges. You can buy more though. It shoots really far and is easy to load.”

Dad says: “I enjoyed this even more than Phelim. I spent the day running around shooting everyone. It might explain where all the cartridges have gone.”

Flutterbye Flying Fairy and Monster High
The Flutterbye Fairy doll spreads her wings and flies through the air and can even hover on the palm of your hand. Rising to a height of two metres it charms everyone and is lots of fun. Aimed at girls aged six to nine, it is powered on its own stand and comes in four styles. toysrus.com, €42.99

The Monster High dolls are based on characters designed as descendents of Dracula, Frankenstein and other scary characters and have a huge following in the US and elsewhere. More Gothic than your usual doll. monsterhigh.com, €27.99

Daisy Pereira (8) says: “I really liked the two dolls. The Monster High was different to normal dolls and that was good and the Flutterbye was great fun. It flew really well most times.”

Dad says: “The Flutterbye fairy in particular was really quite impressive and once fired up it flew around really well. Getting it to hover on your hand was great fun. The girls really enjoyed it. It took a while to charge sometimes but that might be because we were using it a lot.”

Lego Coast Guard Patrol
This set by Lego is a terrific gift for anyone who enjoys Lego. It has a coastguard patrol boat, a helicopter, dingy and lots of additional crafts and accessories. It’s aimed at five to 12 year-olds. The boats float on water and the submarine can be deployed with its own propellor. Great fun for nimble hands and enquiring minds. lego.com, €72.99

Ruby Pereira (11) says: “It was really good fun. We liked it a lot and built the ships and helicopters. It was great to build all day and very interesting too. We liked that it was the coastguard version as we live beside the sea.”

Dad says: “It was great to see them play with it all day. They sat down immediately and started building and really seemed to enjoy it. There was so much for them to make and do.”

Monopoly Empire
The famous game gets a Wall Street makeover which lets you win by buying billboards of famous US products: McDonalds, EA, Coca Cola, Xbox. A modern twist on the original and just as much fun. (And you still get to go or skip going to jail). hasbro.com, €23.99

Altan Holland (9): “I loved this game. It is the newest version with counters using McDonalds fries, racing cars and Wii handsets instead of the normal counters. It’s set in Manhattan. You can play with up to four people but sometimes I just wanted to play on my own.”

Mum says: “It was great to play Monopoly again with all the stress and arguments but it was good old-fashioned quality family time, away from screens. Altan loved being the banker. I think he’s turning into a capitalist.”

Teksta Robotic Puppy
The latest version of the Teksta puppy pulls at your heart strings with his sad (and happy) puppy dog eyes. He’s said to be “emotionally intelligent” and you use hand gestures to make him do his tricks – the most popular being the back flip. He’s fully integrated with an Android or iPad app which allows you to teach it even more tricks. It walks towards you when it senses your presence or if you call its name. In pink and blue. tekstaroboticpuppy.com, €71.99

Aya (10) and Ciara (8) Zomer say: “I’m probably a bit old for it but it was good fun. I had to do the hand signals a lot to learn how to use it. It comes with a remote control and a ball that it can play with which is good fun.

Mum and dad say: “It was harder to setup than expected and the hand gestures weren’t that easy. It takes some getting used to. It needs an iPad to do some of the tricks.”

LeapPad Ultra
The LeapPad is well known for its educational apps and is a great addition to your child’s toy chest. It is sturdy enough to withstand most child treatment and has built-in wifi. Parental controls allow you to set access for downloads and there is a lot in the LeapPad library to choose from. It has a 7-inch high-res screen and both front and back cameras for video and stills. leapfrog.com, €167.99

Peter Cousins (5) says: “I had great fun with the art and pet games. You can download books and take pictures and video. It talks to you and goes on wifi.”

Mum says: “Very robust. Much better suited to the age group than a regular tablet. Lots of educational apps that looked very attractive but they were very expensive and you can’t download them in Ireland without buying a voucher in a shop first which was a disappointment.”

All toys can be seen at the Dublin Toy Fair at the RDS, November 27th to December 1st; adm €5 (adults and children; under 2s go free); €20 for a family ticket (any combination of five adults or child). See dublintoyfair.com

With thanks to the Dublin Toy Fair for supplying the toys for review.