Support growing slowly for legalisation of cannabis in Ireland

At the moment, people who use marijuana to relieve medical conditions face criminalisation, a €2,750 fine and up to 12 months in prison for a second offence 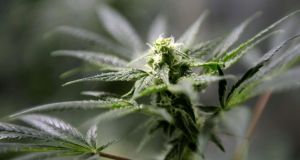 In Co Meath, 60-year-old Darcy Petticrew ingests a tincture 10 times weaker than cannabis to relieve pain caused by a spinal-cord injury that has had him wheelchair-bound for 17 years. “Without it I cannot function; it’s that simple,” he says.

It is 13 years since Dr Orla Hardiman, a consultant neurologist working with people who suffer from multiple sclerosis, called for the legalisation of medicinal cannabis.

Yet today in Ireland, MS sufferers and others who procure cannabis to relieve symptoms face criminalisation, a €2,750 fine and up to 12 months in prison for a second offence.

A pharmaceutical spray containing cannabis extract, Satifex, is to be allowed for use by March, Minister of State for Health Alex White has said, but the medicinal use of cannabis will not be legalised.

The US has shown how, once discussion opened on the topic of marijuana legalisation, favourable opinion increased, first steadily, then rapidly.

There, support for legalisation jumped from 44 per cent in 2010 to 58 per cent last year.

Experience elsewhere shows three stages in the gradual shifting of opinion towards legalising cannabis: it typically progresses from an outright ban to its being allowed for medicinal use, to decriminalisation, then to legalisation and regulation. In Ireland, which is out of step with much of Europe on cannabis, doctors working with addiction believe we should go farther than allowing cannabis for medicinal use.

Significant cannabis-associated harm is not from the psychoactive effects of the drug itself but from its criminalisation, argue Dr Garrett McGovern and Dr Cathal Ó Súilleabháin, GPs who have decades of experience in the area. Middle-class, university-educated people are top users of the drug. Use is highest in the “group A” professional and managerial class, university educated people and young men.

The worst outcome from their use of the drug is most likely criminalisation, say all three doctors. A drugs offence can ruin a young person’s future, says Ó Súilleabháin, affecting their careers and banning them from certain occupations and from travel.

Criminals preying on the naive is another current problem. Dr Bobby Smyth, a psychiatrist and psychotherapist with the HSE, works with teenage drug abusers. Among his clients are “not-streetwise kids” who are spending €25 to €50 a day on cannabis, who owe money to drug dealers and who are physically threatened.

Those problems would be solved, say all three doctors, by decriminalising cannabis and giving it a civil sanction on the level of a parking fine, discouraging its use while limiting long-term social harm.

“In Ireland, we have had a national drugs strategy for the past 14 years which is built upon harm reduction,” says Smyth. “The laws may still be excessively punitive in print, but in practice the criminal-justice system seems to take a fairly benign view on cannabis smokers.

There are exceptions, and a tweaking of the law may be worthy of debate. A simple first step would be to consider a move toward a civil sanction – like a speeding fine – for [cannabis] smokers, and remove the criminal penalty for use.”

But considering that one in five Irish 15- and 16-year-olds has tried cannabis at least once and that the average age of first use is 18, negative outcomes for young people need to be explored. Smyth cites several scientific papers that state sufficient evidence or at least a possibility that using cannabis in adolescence could increase the risk of developing psychotic illness later in life. He estimates the risk at 6 per cent.

In arguments for legalisation, comparisons with alcohol are often used: in a paper published in the Lancet on the comparative personal and social damage of drugs, alcohol ranked first.

“I would prefer my children smoke cannabis by a mile rather than drinking alcohol – there’s no comparison,” says McGovern, who runs a rehabilitation programme in south Co Dublin.

“Alcohol is devastating, so physically and psychologically damaging, once it gets hold of you it’s really horrible; it destroys families and ravages the body. Cannabis doesn’t do those things the way alcohol does.”

McGovern, however, does say that under the age of 18 the adolescent brain is too malleable for any psychoactive substance to be completely safe.

If legalised and regulated, cannabis would be safer, allowing for testing of the product to prevent contamination and to enable grading of the drug in regards to strength and the THC/CBD ratio, as happens now in Colorado, argues Ó Súilleabháin. Cannabis legalisation would take millions out of the criminal economy, he adds, lift the burden from Garda and, if taxed, would add to State coffers.

Such arguments have tipped public opinion in favour of legalisation in the US and in several European states. Ireland remains some way off joining them.