Although prostate cancer is one of the most common cancers affecting men in Ireland, it is very treatable if caught in time and very often requires no treatment at all 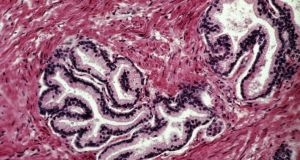 Dr Muiris Houston The prostate is a gland about the size of a walnut and is located around the urethra – the tube that runs from the bladder to the penis. Its function is to manufacture substances in the fluid that make up semen.

If the gland becomes inflamed, this is referred to as prostatitis. The prostate commonly enlarges in later life, leading to a condition called benign prostatic hypertrophy (BPH). And it may also become cancerous.

This review will focus on prostate cancer and BPH.

About four out of every 10 men over the age of 50 and 75 per cent of men in their 70s have urinary symptoms that are caused by a benignly enlarged prostate.

A blood test called prostate specific antigen (PSA) is used to identify those at greater risk of prostate cancer. However, PSA levels may also be elevated in a man with BPH and other conditions. Causes, signs and symptoms Benign prostatic hypertrophy is caused by enlargement of the prostate gland and is a common disorder in men over 50. By the age of 55, about 50 per cent of men will notice problems with their “waterworks”. Symptoms include frequency of urination, the urge to urinate with little warning and waking at night to empty the bladder. Difficulty starting a urine stream, decreased force or dribbling and complete urinary obstruction may also occur.

When the prostate gland enlarges, it squeezes the urethra, making it difficult for urine to pass through. Diagnosis of the condition is usually made by digital rectal examination (DRE) – a physical examination of the rectum to see if the gland is enlarged. An assessment of urine volume and force, blood tests and other tests will be carried out. You will also be asked about any other medication you are taking. In addition to alcohol, drugs for the treatment of Parkinson’s disease, depression and those used to treat an irregular heartbeat can aggravate the problem.

The causes of prostate cancer are unknown.

However, a number of factors can increase your risk of developing the condition. Most cases develop in men aged 50 or older.

- Men who have a father or brother affected by prostate cancer are at slightly increased risk of developing the disease.

There is no single test for prostate cancer.

All the tests used to help diagnose the condition have benefits and risks.

The most commonly used tests for prostate cancer are blood tests, a physical examination of your prostate (a DRE) and a biopsy.

The PSA blood test may help detect early prostate cancer. Men are not routinely offered PSA tests to screen for prostate cancer as results can be unreliable.

This is because the PSA blood test is not specific to prostate cancer. PSA can be raised due to BPH, a urinary tract infection or inflammation of the prostate as well as prostate cancer. Raised PSA levels also cannot tell a doctor whether a man has life-threatening prostate cancer or not. This means that a raised PSA can lead to unnecessary tests and treatment.

The US Preventive Services Taskforce has ruled that the routine use of the test as a screening mechanism did more harm than good.

Its decision came amid concerns that some men, after routine screening using PSA, were being treated for a form of the cancer that was unlikely to shorten their lives. This was after post-mortem studies showed the presence of prostate cancer in older men who had died from other causes, illustrating the usually slow-growing nature of the disease.

However, a minority of men get a more aggressive form of prostate cancer and the detection of the disease in your 50s poses a different set of challenges than a prostate cancer diagnosis in a man in his 80s.

A dilemma for doctors is that while it is important to diagnose high-risk cases within the window of curability, many men with low-risk prostate cancer do not need aggressive treatment. Prevention and treatment There are a range of treatments for BPH. Medical treatment options include drugs that improve the flow of urine – some, such as finasteride, help shrink the enlarged gland; other drugs called alpha blockers relax the smooth muscle of the prostate and the neck of the bladder, thereby relieving obstruction. Surgical options include a transurethral resection of the prostate (Turp) where some or all of the gland is removed.

If the symptoms of BPH are ignored for some time, you may develop a painful condition called acute urinary retention, the only treatment for which is to have a urinary catheter inserted to release the trapped urine.

However, about one in three sufferers manage their condition with medication and lifestyle changes, such as avoiding fluids for at least three hours before bedtime and emptying the bladder completely when you go.

There is no proven way to prevent prostate enlargement.

For many men with prostate cancer, treatment is not immediately necessary.

If the cancer is at an early stage and not causing symptoms, a policy of “watchful waiting” or “active surveillance” may be adopted. This involves carefully monitoring the condition.

Some cases of prostate cancer can be cured if treated in the early stages. Treatments include surgically removing the prostate, radiotherapy and hormone therapy.

Some cases are only diagnosed at a later stage when the cancer has spread. If the cancer spreads to other parts of the body, typically the bones, it cannot be cured and treatment is focused on prolonging life and relieving symptoms.

All treatment options carry the risk of significant side-effects, including erectile dysfunction and urinary incontinence. For this reason, some men choose to delay treatment until there is a risk the cancer might spread.

Prostate cancer is one of a number of tumours linked with obesity, so having a healthy diet and remaining active are helpful in terms of prevention.

The Irish Cancer Society is a valuable resource for information on prostate cancer. National cancer helpline 1800 200 700