The Carlow village that wants to ‘cancel the commute’ 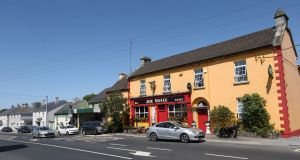 Ballon will use a former school room as an alternative office for commuters to Dublin. Photograph: Laura Hutton/The Irish Times

“The loss of the Garda station was a blow but people still want to live here for the quality of life,” says Donna Mullin, principal of the two-teacher St Mary’s National School in Finea, Co Westmeath.

Finea is a small village on the border of Westmeath and Cavan. Co Longford begins just 3km to the west.

Five years ago The Irish Times visited Finea in the wake of complaints by local businessman Bernard Coyle that the absence of broadband – or even a mobile phone signal – meant he had to drive to Mullingar to upload documents for his Japanese customers. His business, Mr Crumb, exports food across the world but it was not possible to get broadband through the local telephone exchange and the GSM signal was weak.

The village suffered the loss of its post office early in 2014, followed by its Garda Station. It had already lost its health centre, and the village’s two pubs were on reduced opening hours. The population was falling marginally – from 272 in 2011 to 265 in 2016.

At St Mary’s National School the pupil intake in 2014 was one pupil. The school was reduced to one teacher, and Ciaran Fitzsimons, one of the town’s publicans and father of that pupil, said business was so quiet sometimes there was hardly any point lighting the fire.

Five years later there is still no Garda station, health centre or post office. Yet residents still very much want to live there and are wary of newspaper articles that might paint the place as a depopulated wasteland.

In fact there are some signs of improvement. Mullin says the intake of pupils this September will be five. This will secure the now-restored second teacher position. “Yes we lost things like the Garda station and the health centre and that was a blow but this is a community there is a lot more to it and the school is at the heart of it,” she says. She says it is a lovely place to work and parents appreciate that pupils have space and are “allowed to run,” she adds.

Geraldine Hand, who runs the local shop and has lived all her life in Finea, says the village may have “advantages” that other villages don’t. She speaks of its location midway between loughs Sheelin and Kinale, a feature that makes it popular with fishers, especially those from Germany who rent boats and accommodation and buy food and drink in the village every year.

High speed fibre broadband has been installed, “although only in the last year”, and she says it is much appreciated by villagers.

For all that, veteran local councillor Paddy Hill says the lack of infrastructure is still a problem. The village is not connected to mains drainage and even houses on the main street are on septic tanks. “If I want Irish Water to put in a mains system they say do a cost benefit analysis, see how many people need it.”

Seamus Boland, chief executive of Irish Rural Link, says Finea’s key advantage is the Mr Crumb factory. There is a plethora of small villages across the midlands that are not so fortunate and people are forced to leave for work or to commute long distances.

“Dublin is full,” Boland says, and it is time governments stopped paying lip service to the term “balanced regional development” and started taking action. Boland recognises the National Planning Framework plans to develop regional centres such as Athlone, and acknowledges that such moves can sustain villages and towns in their hinterlands.

He says what is needed is “an Intel” for Longford, Mullingar, Portlaoise to revitalise the midlands.

The phenomenon of people making long daily commutes to Dublin is “not sustainable”, he says.

In Ballon, Co Carlow, enterprise development worker Peadar Casey agrees. The population of Ballon grew by just 0.6 per cent between the 2011 and 2016 censuses, from 710 people to 714 people. But the village is just nine minutes from the M9, non-tolled motorway, and a large proportion of the locals commute to Dublin. Ballon is within the outer Dublin commuter belt.

“First we have to ask people to be ambitious in their thinking. For many if they wanted to work locally they could find something; for others it might be the chance to work without commuting, from a local office hub for example.”

Keeping the commuters in the town for even one day a week each means more lunches in coffee shops, more people about.

Ballon will be starting a pilot project in the near future, offering desk space to workers and removing the need for them to travel

Eileen Murphy, former manager of a local training centre, explains the plan to make this happen. When demand for training started to drop off, she says, a survey was carried out to explore future roles for the centre. The results indicated that people wanted somewhere outside the home where they could work without commuting.

So the idea of a digital hub was born. Ballon will shortly run a campaign entitled “cancel the commute”, encouraging people to use the hub one day a week.

“We are fortunate we have good fibre broadband” she said. The research indicates that many employers would be happy to have an employee work one day a week from a digital hub,” says Murphy.

Ballon will be starting a pilot project in the near future, offering desk space to workers and removing the need for them to travel.

For Irish Rural Link the availability of such centres is beneficial and could become government policy. In the absence of local employment, digital working hubs could take hundreds of cars off the motorways – lowering commuting times, boosting productivity and reducing carbon emissions.

The Government, says Boland, must get “real” on balanced regional development. The fact that people can no longer afford to buy a house in Dublin and are prepared to move for cheaper housing can be good for regional areas and good for environmental policy.

“It may be the last chance to deliver on the promise of balanced regional development,” Boland concludes.