The Border: smart or dumb?

More co-operation, resource-sharing and travel between North and South would be smart. Talking about abolishing the Border altogether is dumb 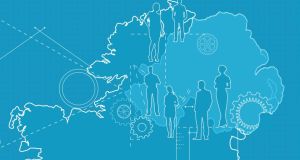 Prof Luke Drury’s challenge to people to think as “engaged citizens in a smart society” in 21st-century Ireland has interesting implications for how we view the 92-year-old issue of the Border.

We have always tended to view the Border in a zero-sum way: you are for it or against it; a unionist or a nationalist; in favour of Northern Ireland’s link with Britain or in favour of a united Ireland. In the past it has been very difficult to take any kind of nuanced stance between these two absolutist positions.

Maybe this is beginning to change. In this phase of the independent state of Ireland’s existence – as one of the world’s most globalised economies, and part of an integrating Europe in which traditional borders are losing much of their meaning – maybe we need to start re-examining these simplistic early-20th-century usages.

Nuance, complexity and smart thinking are now buzzwords, so why shouldn’t this influence our thinking about the Border?

The Belfast Agreement, signed on Good Friday in 1998, was a highly complex and sophisticated international pact that not only brought to an end 30 years of violence in Northern Ireland but also embedded in law the three interlocking strands of power-sharing in the North, institutional cross-Border co-operation between the North and the South, and intergovernmental collaboration between the two parts of Ireland and Britain.

Would it be helpful to peace, mutual understanding and prosperity on this island to start seeing the elimination of the Border as smart in some aspects but dumb in others?

It is very smart, for example, to treat this island, isolated at the end of the European oil and gas pipeline, as one unit for the purposes of energy supply and distribution. This is what the energy authorities and companies in both jurisdictions have been doing in recent years: extending the Republic’s natural-gas pipeline to the North; establishing an all-island wholesale electricity market; uniting the two grids under one operator, EirGrid; and, finally, allowing the ESB to take over Northern Ireland Electricity.

All this happened with little controversy, as the North’s politicians largely agreed that a more efficient all-island market made sense in an energy-hungry world. The opening of an interconnector from Co Dublin to Wales last year provided a complementary east-west dimension that will use Ireland’s excess wind-energy capacity.

On the other hand, Gerry Adams calling for a Border poll in the middle of the loyalist flag riots last January is clearly in the dumb category, particularly given the most recent Belfast Telegraph opinion poll, in which fewer than 4 per cent of Northerners said they wanted a united Ireland now and 22 per cent said they wanted it in 20 years.

The Centre for Cross Border Studies, InterTradeIreland, Engineers Ireland (principally in its superb 2010 study, Infrastructure for an Island Population of 8 Million) and other organisations have identified plenty of areas where it is smart to co-operate across the Border.

It is smart for representatives of the two parts of the island to go abroad together on missions to persuade foreign investors to come to Ireland; most people in the US, China, India and Brazil see Ireland as one country anyway.

Multinationals with a major presence in both jurisdictions, such as Diageo and BT, already treat the island as a single unit. There are obvious complementarities for firms considering an investment here, such as low corporation tax and highly educated graduates in the South; and cheaper labour and supply chains, and particular skills in engineering and pharmaceuticals, in the North. A friend involved in industrial promotion told me that nine of 10 firms he spoke to recently in the midlands now prefer to source key supplies in the North for cost reasons.

Smart to integrate
It is smart to start properly integrating the tourism bodies on the island. Tourism Ireland does an excellent job promoting the whole island abroad, but when tourists arrive here they find two domestic tourism bodies – Fáilte Ireland and the Northern Ireland Tourist Board – which seem rarely talk to each other.

It is smart to start thinking about how more elements of the hugely expensive health systems in the two jurisdictions might be aligned to complement each other and avoid duplication, as is already happening in services such as cancer treatment, ear, nose and throat procedures and children’s heart surgery.

The DUP Minister for Health on the Northern Ireland Executive Committee, Edwin Poots, has said he is holding talks with the Republic’s health authorities about how small Border-region hospitals, such as Daisy Hill in Newry, might become more viable by taking patients from the South. That’s smart thinking.

It is plain good sense for the universities on the island to increase their research collaboration, so that Irish researchers seeking multinational funding from the EU – the only source of major funding in these difficult times – can have an immediate advantage over their continental rivals, with two partners already signed up when they go on to seek the further European partners they will need to be successful.

It is smart for the two police forces to work closely together, as they do, to catch criminals who use the Border to escape the law. One could go on giving examples of where practical cross-Border co-operation makes complete sense, brings mutual benefits, and threatens nobody.

A good rule of thumb is that anything which benefits the citizens of both jurisdictions by making the Border more porous is smart. Anything that stokes the old sectarian animosities in the North is dumb. So the Government of the Republic should stay out of thorny issues such as flags and “dealing with the past”, and leave it to Richard Haass, the former US envoy to Northern Ireland who is chairing the current all-party talks, to undertake the thankless task of trying to find a compromise that will satisfy the “tribal” leaders in the North.

On the other hand, it should try hard to make sure that commemorations of the 1912-1922 period are, in the words of Micheál Martin at the Merriman Summer School in August, used “to signal points of unity rather than division – to explain how the concepts of victory and defeat have little relevance today”.

For smartness is not just about how we deal with the present and future in Ireland. It should also inform our thinking about our conflicted and divided past.