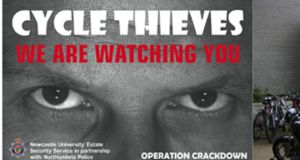 Two near certainties about university life: your bike will get stolen at least once and you will get repeatedly drunk during your time there. It’s the norm. But what happens if a university tries to crack down on bicycle theft and attempts to do something about binge drinking among students?

Two studies at two unconnected universities have shown that yes, you can dramatically cut bike theft and you can radically alter students’ alcohol intake. And, weirdly, the solution is the same in both instances.

We start at Newcastle University. A research team began by monitoring bike thefts from racks across campus to get a control (average) figure for the theft rate. They then placed a poster above three of the bicycle racks. The poster consisted of a large pair of human eyes with the message: “Cycle thieves, We Are Watching You.”

Remarkably, bike theft from the racks with the human eyes poster above them dropped by 62 per cent. Those racks which didn’t have the posters above them saw a 62 per cent rise in bike theft. Those stealing the bikes were so deterred by the warning poster that they simply stole from the non- poster racks instead.

The lead researcher of the study, Prof Daniel Nettle, told BBC News: “We don’t know exactly what is happening here but this just adds to the growing evidence that images of eyes can have a big impact on behaviour. We think the presence of eye images can encourage co-operative behaviour.

“One strong possibility is that the images of eyes work by making people feel watched – we care what other people think about us and, as a result, we behave better when we feel we are being observed.”

The psychological effect of surveillance doesn’t just apply to reducing bicycle theft. The same research found that if you stuck a similar human eyes poster in a university canteen (where students are supposed to return their food trays but rarely do), the levels of tray-return increased dramatically. The team also found that if you put the human eyes poster above a supermarket trolley for food charity donations, those donations immediately doubled.

It’s not all good news, though. From the initial bike study, we learn that thieves who move out of sight of the posters (ie to a bike rack without the human eyes) behave as they did before. Take the eyes down from the canteen and trays no longer get returned; take them down from the supermarket charity trolley and donations go back to what they were before.

Modify behaviour
However, the research team was still astonished by the influencing power of the posters and how they could modify behaviour so easily and cheaply. The key reason why the posters were working so well is to do with “social norming”. Most people live by social norms – established patterns of behaviour. Bicycle theft is a violation of the social norm, but it is also very easy to do.

Because it is so prevalent at universities, bicycle thieves perhaps felt that judging by the high rate of thefts, “everybody else is doing it”, but confronted with the poster that starkly reinforced the notion that it was theft (a violation of the norm) and feeling under surveillance by society, they dramatically reduced their activity.

In Northern Illinois University in the US, college authorities were becoming concerned about the rates of binge-drinking among students. They first tried the usual, time-honoured method: the scare tactic.

Posters were put up warning about the health dangers of excessive drinking. They were blithely ignored by a student populace who had heard it all before (from their parents and others).

Researchers tried a different approach – the social-norming approach. They were inspired by a particular study which had previously found that if you ask the average student how much their peer group drinks, the student routinely grossly overestimates how much their friends are consuming. Apparently we all make this mistake.

The Illinois team found that students at the college were responding, in their drinking behaviour, to peer pressure – they only felt they were “fitting in” if they drank as much as everyone else around them did. What they were actually doing though was responding to an imaginary peer pressure – to a level of drinking that simply didn’t exist. That was the research team’s “in”.

Students had a completely distorted image of the social norm of drinking levels. The research team simply told them the truth about how much or little their peer group was drinking. And that truth was shocking: the majority of students at the university drank moderately.

If a heavy student drinker is confronted with just how out of step their drinking is compared with everyone else, it can be a significant breakthrough. The rules of social norming among young people away from home and eager to fit in dictate that students, generally, will modify their behaviour to remain part of the group.

The research team ran with a “Most Students Drink Moderately Campaign”. They ran full-page ads in the student newspaper with detailed figures of how many drinks were consumed at a typical college party. The result – a slow start. After the first year of the social norming campaign, actual heavy drinking fell by 7 per cent, but after a sustained 10-year campaign ,there was a decline in heavy drinking of 44 per cent.

Elastic definitions
The Illinois campaign has now been successfully replicated at other US universities. Instead of scaring teenagers away from risky behaviour (and young people have a very elastic definition of “risky behaviour”), the principles of social norming yielded far superior returns.

The notion is stupidly simple: if the message given is that most students are, in reality, moderate drinkers, those who do drink a lot will drink less. A key aspect here is not to over-report incidences of dangerous drinking (every university has these) but to consistently communicate the message that all things taken into consideration, moderate drinking is the norm.

While social norming, therefore, can seem like a remarkably efficient way of successfully moderating bad behaviour, its principles fare less well in the outside world.

Bad behaviour is a lot more prominent and newsworthy than banal and boring good behaviour. Nobody is ever going to remark on a population drinking moderately but everyone will have an opinion/solution to incidences of dangerously excessive drinking. Whether it be football hooliganism, cocaine usage or any deviance from the unreported norm, the media and politicians love a good “crisis/epidemic”.

If people feel that a certain behaviour (whether bike-stealing or heavy drinking) is the norm, telling them to go against that norm will not work. But give people credible evidence that the majority of people don’t steal bikes/drink to excess, etc, then you are establishing that good behaviour is the norm.

Perception problem
The perception problem with social norming is that there is no “drama” or “crisis intervention” involved. It’s not sexy – it’s simple and slow-working. For a fixed-term government with its instant add-water “campaigns” and “initiatives”, it doesn’t make any political sense.

But it’s out there, quietly going about its work. Whether it’s the successful application of social norming against bullying – people are a lot less likely to bully and less likely to be passive bystanders if they are aware that the vast majority of people are against bullying. The US military and the United Nations now use social norming to reduce incidences of sexual harassment/violence.

Four years ago, officials in the British tax system had a big problem with people not paying their taxes on time. For decades they had used threats: late fees, interest charges, legal action. However, in a 2009 pilot study they went for the social norm approach. They simply sent out a letter which read: “Nine out of Ten people in Britain pay their tax on time.” Result: they collected £5.6 billion more in overdue revenue in 2009-2010 than in the previous year.

The more precise the social norm message, the better the result. A hotel which used the message “Please re-use your towels to help save the environment” wasn’t really getting anywhere with the plea, but when the sign was changed to read: “The last person who stayed in this room re-used their towels”, the message got through.

People don’t like being nagged/warned/ threatened/made to feel scared and uncomfortable. Social norming is not about telling people what to do or not to do, it is simply telling them what everyone else is doing. And it works.