Don’t pass on a redemptive journey to Ardmore 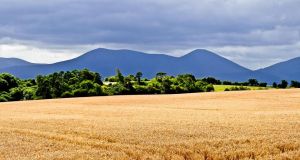 Where would you be off to? My questioner was a weather-beaten man with a Waterford accent. “St Declan’s Way over Bottleneck Pass.”

Instantly I was taken aback for I had earlier sallied forth from Goatenbridge (see panel), suffused with anticipation about finally completing a route that had long taunted me. Tagging what I assumed was the Knockmealdown pilgrim path led me upwards along the Tipperary Heritage Way. Then, the Liam Lynch Loop conveyed me along an undemanding trail locally known as “Na Staighire”.

Reflecting on the timeless nature of this ancient walkway, I arrived at a footbridge to immediately find my plans disarrayed by a chance encounter.

“But isn’t this the ancient path through the Knockmealdowns?” I pleaded.

Historically he was right, of course. St Declan’s Way is a relatively modern construction based on several ancient trails including the Rian Bo Phadraig, Bothar na Naomh and Declan’s Road. Nevertheless, a robust tradition refers to Waterford’s patron saint charioting from Ardmore to Cashel with Bottleneck Pass presumed his route.

What had drawn me was the long-standing tradition of a redemptive journey to Ardmore. Marked last July by the footfall of 110 pilgrims, the Knockmealdown pilgrim path remains enduringly 21st century proof of the human search for intangible values that materialism leaves unsatisfied.

Not feeling ready to further interrogate history, I thanked my acquaintance and continued. Unforgiving terrain now marked my ascent towards Bottleneck Pass, but then pilgrim trails aren’t meant to be sanitised. It was now wildness all around in a landscape delightfully unaltered from the high point of medieval pilgrimage. Then, mist enveloped the mountainside and I lost the faint trail a few times before reaching what I gratefully recognised as the great earthen bank that necklaces Knockmealdown’s highest peaks.

Despite an appellation more suited to a John Wayne western, Bottleneck Pass proved unremarkable. So I didn’t tarry but began descending south on a well-defined track. Then came a moment that must have been one of epiphany for countless weary medieval travellers. The mist parted to reveal outrageously photogenic views over the meandering river Blackwater to Ardmore and the silvery ocean beyond.

Now I could make out the dreamy outline of the renowned Cistercian abbey of Mount Melleray which was founded in 1830.

Passing right of Dyrick Hill, the slope eased as I reached the R669 near Gloungarrif Bridge where – in the best non-penitential tradition – I had pre-placed my car. Driving away, I reflected that the Knockmealdown pilgrim path remains proof that the past never truly dies, but returns to place a comforting hand on our shoulders.

Our children have sacrificed so much – educationally, socially and mentally
2

What sold for about €385,000 in Kilmainham, Glenageary, Howth and Beaumont?
9