Seasonal work gives teens a taste of the adult world and the independence, responsibility and rejection that comes with it – not to mention having to deal with the general public 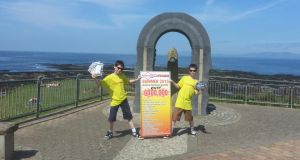 Young entrepreneurs: “Each business had to pay €8 for a slot on the flyer, so they did. And we got 80 businesses taking part.” Twins Michael and Oisín (13) McGloin from Bundoran, Co Donegal

My first summer job actually started at Easter. My friend, who cannot be named for legal reasons – she went on to become a lawyer, but she’s actually a lovely person – and I went to work in a dry cleaner. We travelled into town on the bus. We took our breaks, along with our adult colleagues, in a rat-infested cellar. We went to the pub at lunch time. We were 14. We were delighted.

It is easy to forget how conscientious and open-hearted young people are, and how eager many of them seem to be to join the discredited, shrinking and increasingly cynical ranks of the employed. It is easy also to forget what having a job means to us all, and how much we learn at work.

A flying start
Kathy McGloin of Bundoran has watched the difference that working has made to her twin sons, Michael and Oisín (13) this summer. “They’re getting up a lot earlier, and they’re getting up themselves,” she says. “It’s made a difference to their self-esteem. It’s given them a wee bit of independence. They can go to the cinema, they’ve got their own money.”

Despite their youth, Michael and Oisín, who in the past were part of a team that won a Foróige enterprise award, or NFTE, say that many of their schoolmates from Maghene College are working in Bundoran’s tourist outlets.

He and Oisín started their commercial leafleting business in June, and they will work through July and August. Each morning they deliver flyers to local businesses and caravan parks, for a couple of hours. Kathy thinks an eight-hour day would be too much for 13 year olds – “although sometimes we work seven days a week”, as Michael says.

The division of labour is clear. Both boys leaflet, but “ I’d be more like talking and doing interviews, and Oisín would be more on the computer,” says Michael. “Each business had to pay €8 for a slot on the flyer, so they did ,” he says. “And we got 80 businesses taking part.”

He is saving his money – “although we have outgoings as well” – for a school trip to China next year. “We hope to continue it next summer,” says Michael.

A little respect
In another tourist town, Kinsale, Clara Power completed her Leaving Certificate in June and is now a waitress in the Fishy Fishy restaurant. She started there in transition year, when she did work experience. “It’s a gourmet restaurant, it’s a big restaurant, it’s always busy,” says Clara. “ You’d be sweating. You’d be running all over the place. It’s stressful. Yes, my legs hurt after four hours if you don’t get a break. I didn’t work here for my sixth year at school, so I’d say by the end of the summer I’ll be used to it again and I won’t feel it.”

Of the owners, the Shanahans, Clara says she is very respectful. “And they really respect me. If they ask me to do an extra shift I do. At the same time they let me take three weeks off in the high season, which was a big deal. We get above minimum wage. We get a lot of tips and they are divided between everyone: everyone in wash-up, everyone in the kitchen gets something.”

A summer job can be a young person’ s first exposure not only to what she calls “how hard people have to work to get money” but also to the general public. “There are certainly going to be slightly ignorant people sometimes,” says Clara, “but you just have to learn to smile and bite your tongue and do your job and get over it.”

Who is responsible?
Summer jobs can also introduce teenagers to serious responsibility. Clara’s friend Eimear Reilly (18), is looking after a four-year-old child. Like Clara, she got the job through her parents – “my mam knew the mother”.

Eimear has a younger brother and sister, and has done her share of babysitting. “But never a full-time kind of thing. It’s quite an early start. I have to be in for 7.45 because the mother works in a nursing home. It’s a 10-minute drive from my house and I get a lift from my dad.”

Eimear gets off just after 4pm. She is clear about what her job entails. “It’s being a mother to her during the day, it really is.”

For this she gets paid €250 for a five-day week. There are also babysitting jobs,at €10 an hour, “a few times a month”. Eimear has never had so much money, and is enjoying it. Last year she went to Portugal before going back to school. Now she is saving for college. She is hoping to do commerce at UCC.

The other thing that summer jobs teach, perhaps for the first time, is rejection. In Balbriggan, Co Dublin, Ian O’Connell (16), has been searching all summer. “There’s too many looking for jobs,” he says. “I would have thought you’d just give in your CV and they’d get back to you.”

In Athlone, Co Westmeath, Cathal Galvin (16) printed out 10 or 15 CVs. “I went into all the independent shops in Athlone. I heard nothing back at all. You do wonder what happens to the CVs. They’re put into a press, into a box and you wonder if they’re ever read.”

Cathal thinks that getting a summer job is a matter of who you know. His best hope of a job lies with replacing the ex-girlfriend of his brother’s working in a pub in Lecarrow. Then he’ll be getting back to school. “I’m dying to get back into it. If Mam heard this she wouldn’t know who was talking.”

Life’s not fair
Sometimes trying to get a summer job points up the world’s shortcomings. In Scarriff, Co Clare, Jane Doyle (15) has watched boys her age get farm jobs.

“I asked my dad why it was just boys who got farm jobs – and some of them were younger than me. He said it’s a sexist thing.”

Sometimes, particularly in rural areas, the lack of infrastructure can stymie the best-laid plans.

“I’d like to get a job somewhere else, say in Killaloe, where I go to school. There’s a swimming pool there, and hotels. But there’s only one bus on a Saturday morning.”

As it is Ian, Cathal and Jane have all volunteered with the youth organisation Foroige for the summer. They know the economy has made jobs difficult to find for everyone. But somehow, having talked to them, you feel the working world has missed out by not employing them.