Are you being served? The column that looks at stock, style and service in shops around Ireland 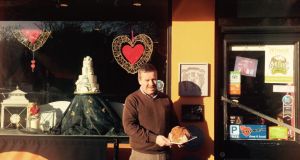 Declan Molloy outside his Artisan Bakery in Roscommon town

We’d all love a great café in our neighbourhood. And a bakery. And a deli. The people of Roscommon town are lucky enough to have all three under one roof, in the form of Molloy’s Artisan Bakery and Fine Food Emporium, at Abbeytown on the Galway road.

A fourth-generation bakery, Molloy’s bakes a range of 150 cakes, breads, rolls, and buns a day, including a large selection of gluten-free produce. They also make their own jam. Owner Declan Molloy oversees everything, and the bakery is on site. They are open seven days a week and have three vans on the road, supplying other businesses.

Delicious breakfast offerings include locally-produced Waldron’s black pudding, home-made apple compote and two slices of Molloy’s toasted soda bread for €3.80 (as tested by this reporter). Bacon and egg on soda bread is €3.95. That would hardly get you a cup of coffee in some Dublin establishments.

“Do you remember what real meat tastes like?” asks the sign outside the town’s Castlemine Farm Shop. This is a great butcher’s that sells the produce from the Allen brothers’ nearby farm of the same name.

You can buy dry-cured ham, grass-fed free-range lamb, beef and pork here. As well as their meat, and home-made sausages, they sell a range of little pies made on the premises, using the farm produce such as beef and stout, and a Thai green curry pie, for €2.99.

Time Pieces on Main Street is a rambling premises, stuffed with unusual gifts. Longing for an American-made solid mahogany rocking horse? Yours for €3,500. If your child’s piggy bank hasn’t got that much in it, there’s a tin of glow-in-the-dark stars for €9.95.

There’s all sorts of sparkly jewellery, Russian dolls, sequinned box clutch bags for €40, occasional tables, leather-bound notebooks, quirky bits and pieces, and a range of doll’s houses, including a bonkers but fabulous one for €189 that when opened up, displays an entire moving musical scene in each room. There are traditional doll’s houses too, fitted with little lights, for €175 (unfurnished).

Donnellan and Co, also on Main Street, is a destination man’s clothes shop. If you live in the midlands, and you’re a chap, you have no need to go to a city to get kitted out.

On two levels, this shop is beautifully laid out, and among the lines stocked are Barbour, Lacoste, Hilfiger, and Bugatti. There’s everything here, from silk handkerchiefs to Barbour jackets and three-piece suits, belts, boxers, socks, coats, jackets, jeans and shoes. They even supply a shoehorn. Rosita Boland 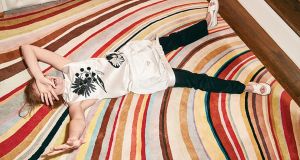