Roisin Ingle on . . . the homeless season 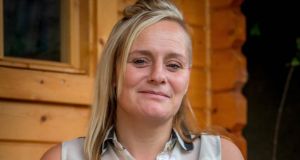 “I had lost everything”: Mandy Cotter, who spoke at the launch of the Homeless Exhibition by David Cantwell, Daisy House

’Tis the season to talk about homelessness. About men dying in doorways. A time to wonder where the bronze statue of a Homeless Jesus lying on a bench, on its way here from Canada, would best be located. ’Tis the season to notice the red noses along St Stephen’s Green, the golden mile that leads up to the Shelbourne Hotel, noses that are less a festive flourish and more a sign of impending hypothermia.

’Tis the season, so I’ll join in too. Never let it be said I was bah humbug about Christmas traditions. Pull up a chair. Stick another briquette on the fire. Turn up the volume on Christmas FM. My tuppence worth is that when I heard about the homeless man who died near Leinster House this week, my first concern was that it was a homeless man I know called Carlow who comes from a place not too far away from the man who died.

I kept saying to myself “but he’s a survivor, it can’t be him”. And all day until I heard the name Jonathan Corrie and saw his picture, I worried about Carlow. Perhaps some people who knew him thought Jonathan was a survivor too.

But, it wasn’t Carlow. Not this time. It was John Corrie. A man known by other people on the streets, a man with a family, a man who is missed by those who knew him and talked sadly about over dinner tables by people like me who didn’t. He is in my thoughts this Christmas, as is Keith Harrington, another homeless man I knew who died in very similar circumstances earlier this year. The difference was his life came to an end in an anonymous inner-city lane. I don’t think his death took up any space on the front pages of newspapers. Let’s face it. We all know that Jon Corrie’s death only registered with us on such a scale because of one thing – as Miriam Lord brilliantly put it: “Location, Location, Location”.

It’s a grim Christmas tale. We hear versions of it every year. We don’t seem to be able to do anything. It gets worse. We wring our hands. There are candlelit vigils and emergency meetings. We question our humanity. We say things like: “the mark of a society is how we care for our most vulnerable”, and our society rarely measures up. But I want to chime in here with a little bit of hope. Because despite the shocking (and I hate to use that word but it is shocking) lack of funding for people doing vital work to help our most vulnerable, this work is happening anyway. It’s happening so quietly, you might not even have heard about it.

But do me a small favour. Today, or this coming week, when you are doing the your Christmas bits, if you happen to be near the Grafton Street area of Dublin, pop in to the Powerscourt Townhouse Centre. On one of the balconies there is a small photographic exhibition called Faces of Homelessness. It is only there until next Saturday.

There are just five pictures by David Cantwell to look at, five short stories to read. They are the stories of formerly homeless women who have been given shelter, a home, a place to rest and rebuild their lives, by a charity called Daisyhouse Housing Association, an organisation that lost all government funding in 2011.

But they carry on. Helping women such as 34-year-old Mandy, who spoke at the launch of the exhibition. “She’s called Saoirse,” she told me, as she cradled her seventh baby. “That’s because she represents my freedom.” Her other six children are in the care of the HSE.

“I had lost everything . . . the ability to be a mother, sister and daughter,” she said of her time before Daisyhouse, when her life was destroyed by drugs and alcohol. “Being able to live independently is a great achievement. I will never have to go back to the streets. The skills I have learned – being able to cook, pay rent, have a clean house, also to communicate with the other women and to stay alcohol- and drug-free. I have great things happening in my life. I get to see my kids every week . . . Daisyhouse has been the best decision I have ever made.”

Go and read about Mandy and Sarah and Louise and Elayne and Olivia and marvel at the inner strength and resources and courage it takes to transform a life. These are smart, funny, resilient women who have been through unspeakable trauma and who are now safe. They are beacons of light shining amidst all the grim tales. If you can find the time, go and acknowledge them, honour them and be inspired by them. ’Tis the season. See daisyhouse.org roisin@irishtimes.com