Pretty speeches and quiet agreeableness: man, I feel like a 1960s woman

Vintage Summer: A book of advice for women from a bygone era has sections on ‘your husband, your money and you’ and ‘imagination in marriage’. What will a group of modern women make of it? 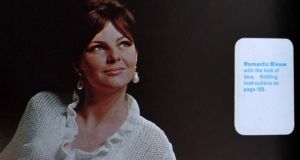 Want to make friends the 1960s way? Then follow the tips laid out in Frankly Feminine by making some frilly knits, among other things. Photograph: Nick Bradshaw 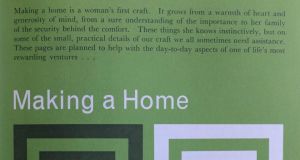 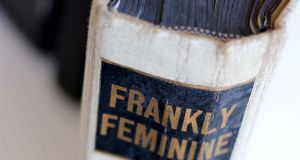 The title of the book Frankly Feminine is as blunt as they come. This 544-page slab of a book, published in 1965 and edited by Eileen McCarthy, is subtitled “A book of comprehensive information and advice for the woman of today”.

It is a kind of handbook, although it is definitely not a feminist one. Its 13 sections cover topics such as beauty, manners, home-making, cookery, and entertaining. If you owned this book in 1965, you would have had the tools to deal with everything from “how to make a pretty speech” to “simple carpentry” and “secrets of sex appeal (women do not often recognise vitality in other women. Men sense it from thirty feet)”.

There are knitting patterns; tips about which flowers are suitable to send to friends on board a ship; how to eat “difficult food (no hostess in her right mind would offer corn on the cob at a formal dinner”; tips about shampooing blankets; a chapter on palmistry; advice on how to add weight (“perhaps you lost weight in an illness and are now determined to get back your curves”); and much more.

Alas and alack, this marvellous book is not mine. It is borrowed from a colleague, to whom it will have to go back. Perhaps she won’t recall I have it, although sadly I can’t find any guidance in Frankly Feminine about the etiquette of returning borrowed books.

There is, however, a chapter about personal relationships. Topics covered here include quarrelling; your husband, your money and you; mother and daughter jealousy; and imagination in marriage. It also includes sections about how to be happy with life and happy with people.

We no longer live in an era where we send flowers to friends on board ship, but the foundation of life at any time is surely built on our relationships with others.

The verdict of women from 2014

Let’s see how 1965 advice about being happy with yourself and others will go down in 2014. Four of us – Veronica, Oonagh, Zeljika and I – sit down to dinner in my house, armed with copies of the relevant pages of the relationships chapter. There are several intakes of breath.

“Oh. My. God,” Veronica marvels when she has finished reading. “Who wants to start?”

Oonagh does. “My instinct is that it’s written for girls going to finishing school,” she says, before reading out some advice on how women should make friends with other women. “Your hat is on straight, your gloves are clean. Tell yourself that everybody can do with one more attractive friend and that you are going to be that person.”

There’s more. “There is no such thing as a world where men can be your friends. They can only be potential husbands.”

Zeljika reads another extract: “The best way to get on in the initial stages of a relationship is to follow your own line and be quietly agreeable. It may not take you very far at first, but it will prevent you from shedding tears of frustration into your pillow at night.

We wonder what an “attractive friend” meant in 1965. Cool? Interesting? Socially acceptable? None of us think it means looks, but given the emphasis on appearances in Frankly Feminine, it is possible.

“I love the first part, the kind of self-help stuff about accepting yourself,” says Veronica. “It’s like modern positive psychology. All that is beautiful: how to be happy with life. It’s acknowledging that feelings aren’t facts, and feelings sometimes make you irrational.”

She likes the line that “the capacity for happiness is inside ourselves”, and “make the most of what you have. Enjoy it while it lasts.”

We all find the parts about how women should behave towards men laughable – and depressing. All men were briskly dismissed as not being “born considerate”, and creatures who “respond best to subtle treatment”.

“Most of them vaguely realise they leave something to be desired, but dislike being constantly reminded of it,” one part reads. Then there’s, “if you want to be happy, accept the excuses a man makes for himself”.

Whereas women’s “very worst fault in our relations with the opposite sex is our over-emotionalism.” Men, we are told, are “less ruthless” than women. They dislike “our habit of treating them like small boys when they displease us”.

“It’s all so insulting and unkind to men,” says Veronica. “Women are being told how to manage and manipulate their relationships with men. It’s telling us that women are emotional train wrecks and men are machines.”

“Saying they respond best to subtle treatment makes them seem like animals,” Zeljika points out. “Or comparing men to children. It’s about tricking men into what you want from them. It’s all about forgetting who you really are. If you’re frustrated, you’re being told not to show it. What I would like to know is, were there books like this for men in the 1960s?”

“It’s written in such a way that it’s taken for granted these assumptions about men are real,” says Oonagh.

We move on to a section called Giving In. “There is no real equality between the sexes, and those who think otherwise are merely deluding themselves. Women have freedom, opportunity, but this doesn’t put them on the same footing as men. Fortunately, we aren’t natural world-shakers.”

“It’s saying there is no equality, and don’t even think about trying to change that,” says Oonagh.

The statement about women “fortunately” not being “natural world-shakers” makes us all extremely cross. The 1960s, after all, were supposedly about a new independence for women.

Has anything really changed? I do not believe women have achieved equality with men. The good thing is that there are a lot more prominent female “world-shakers” around now than there were in 1965.

They obviously didn’t take Frankly Feminine’s advice: “If we’re wise, we know when and how to give in gracefully. The benefits it brings are well worthwhile.”

Men: Here are some of the stumbling blocks in our relationships with men. Remember that they aren’t born considerate (although they are usually kind, which is different). This deficiency is a by-product of the male superiority complex, which women often don’t take seriously enough. Most men have very little sense of humour about themselves. If you want to be happy, accept the excuses a man makes for himself.

Tact: This is something to cultivate, invaluable in all our dealings. But it is particularly necessary with men, who are less ruthless than we are, more anxious to put a good face on things, scared of extreme behaviour.

Few men ever come up to our romantic dreams – who could? File this discovery, then behave as if you hadn’t made it. Most men vaguely realise they leave something to be desired but dislike being constantly reminded of it.

They hate our insistence, particularly when they are in the wrong; our habit of treating them like small boys when they displease us; our fondness for discussing them with total strangers. They respond best to subtle treatment. Make a point of keeping your man so contented that he is pure bliss to live with.