Women in research are anything but boring

Two PhD students feel female academics’ work is overlooked, so they decided to get behind the keyboard, set up a blog and show the world what women do 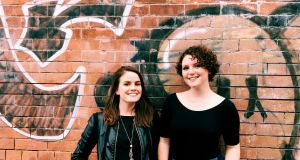 Grace McDermott and Catherine Connolly, two PhD students in DCU, set up the Women are Boring blog in a bid to showcase female-led research from around the world.

If you google “women are boring” you’ll find 44 million results, varying from thinkpieces on why women “only talk about hair, make-up and men”, to advice for women on how to be less boring, to forum discussions around why women are boring and annoying to speak to.

In response, two DCU PhD students have set up a blog, Women Are Boring, in the hope that when the term is searched, people will find them instead. Featuring other female academics writing about their research in an accessible way, Grace McDermott and Catherine Connolly are setting out to prove that women are anything but boring.

“Me hearing people think women are boring wasn’t surprising. To verbalise it that way is shocking but it’s not shocking at all. This is the world we live in, that this is still accepted and expected that not only are we boring but we’re meant to be boring,” says McDermott. “The reason we wanted to make the blog is because this is information we were hungry for and we can’t find.”

The pair met when completing the cross-discipline classes that DCU PhD students study. McDermott studies in the School of Communications looking at Islamophobia in the media, while Connolly is in the School of Law and Government researching the use of drones for targeted killings. While there is some crossover between the two, without those classes, they would never have known about the other’s research.

“Even as a specialist in my discipline, I would never be able to read her research. I would never come across it or see it because it would be in different academic journals and the general public doesn’t have access to those. So if I couldn’t, as an academic, read her research, the public definitely wouldn’t,” says McDermott.

“We started the site in May, and found very quickly that the interest was there. People – men and women – were really interested and really want to hear these voices,” says Connolly. “A big part of it for us was that it would be really accessible to a general audience. We said we wanted to reach a wider audience and normalise women as intellectuals and women as authoritative figures.”

Though the blog has reached 95 countries and has had contributions from women academics in various corners of the world on equally varied topics, they felt at the beginning it was particularly important to have a space like this in Ireland because, according to EU figures, this country has the second worst glass ceiling for women in academics in Europe, with only Malta trailing behind us.

“For me, as a female academic, there are specific aspects of the experience that are directly connected to the fact that I’m a woman. Right away, I’m 25 and people are already talking to me about where I’m going to fit the babies into the equation of getting a lecturing position,” says McDermott.

“Part of why I returned to work was I was so worried about my earning potential in line with when I eventually have babies and get the PhD. For my partner, they’re things that never cross his mind. So the site is also about finding other women who I could talk to about it, because there’s nothing out there.”

This is personally important to both women, who each had very different journeys to academia. While Connolly was a self-proclaimed geek in school, she looked up to Louise Richardson, the first female vice-chancellor of Oxford University. Richardson is from Waterford and is the eldest girl in a family of seven, the exact same as Connolly.

“Having female role models that I could point to and say, ‘If they can do it, I can do it too’, was really important for me,” she says.

McDermott hated school, barely made it out of her New York high-school and she was forced to go to college. “I didn’t see anything appealing at all about college, about being smart, to me that was not cool. . . It’s a big thing for both of us for young women to start believing it’s okay and a goal, to be smart and to be educated. It needs to be pushed that it is attractive, it is valuable and worthwhile to have achievements outside of the way you look,” she says.

“We really want it to be open to anybody because, as an academic, you want your work to influence people, and public engagement is really important for academia,” says Connolly.

In the meantime, the pair won’t be accepting any guff when it comes to questions about the lack of male voices on the site.

“People have said, ‘Why aren’t men featured?’. My question is why aren’t they asking where are the women in the rest of the world. I turn on the television or radio and listen to loads of media for men. Where is the media for women? To be a woman who makes anything of herself in terms of the media, you need to be super exceptional.

“We need to normalise women so mediocre women, like mediocre men, can all make the stage. Men are the dominant voices in every space, so we need to normalise female voices, the good ones, the bad ones. We need them there so we can at least be equals,” McDermott says.

Let Joe Wicks get your children fit. All you need is a screen and some space
10