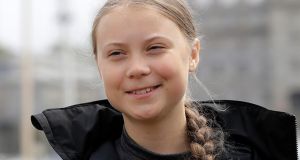 Climate change activist Greta Thunberg addresses the media during a news conference in Plymouth, England. Thunberg has crossed the Atlantic on a zero-emissions sailboat to attend a conference on global warming. Photograph: Kirsty Wigglesworth/AP Photo

Why is Greta Thunberg so triggering? How can a 16-year-old girl in plaits, who has dedicated herself to the not-exactly sinister, authoritarian plot of trying to save the planet from extinction, inspire such incandescent rage?

Last week, she tweeted that she had arrived into New York after her two week transatlantic voyage: “Finally here. Thank you everyone who came to see me off in Plymouth, and everyone who welcomed me in New York! Now I’m going to rest for a few days, and on Friday I’m going to participate in the strike outside the UN”, before promptly giving a press conference in English. Yes, her second language.

Her remarks were immediately greeted with a barrage of jibes about virtue signalling, and snide remarks about the three crew members who will have to fly out to take the yacht home.

This shouldn’t need to be spelled out, but as some people don’t seem to have grasped it yet, we’ll give it a lash: Thunberg’s trip was an act of protest, not a sacred commandment or an instruction manual for the rest of us. Like all acts of protest, it was designed to be symbolic and provocative. For those who missed the point – and oh, how they missed the point – she retweeted someone else’s “friendly reminder” that: “You don’t need to spend two weeks on a boat to do your part to avert our climate emergency. You just need to do everything you can, with everyone you can, to change everything you can.”

Some of the criticism levelled at Thunberg is astonishing. It is the most vicious and the most fatuous kind of playground bullying

Part of the reason she inspires such rage, of course, is blindingly obvious. Climate change is terrifying. The Amazon is burning. So too is the Savannah. Parts of the Arctic are on fire. Sea levels are rising. There are more vicious storms and wildfires and droughts and floods. Denial is easier than confronting the terrifying truth.

Then there’s the fact that we don’t like being made to feel bad about our life choices. That’s human nature. It’s why we sneer at vegans. It’s why we’re suspicious of sober people at parties. And if anything is likely to make you feel bad about your life choices -- as you jet back home after your third Ryanair European minibreak this season – it’ll be the sight of small-boned child subjecting herself to a fortnight being tossed about on the Atlantic, with only a bucket bearing a “Poo Only Please” sign by way of luxury, in order to make a point about climate change.

But that’s not virtue signalling, which anyone can indulge in. As Meghan Markle, Prince Harry, and their-four-private-jets-in-11-days found recently, virtue practising is a lot harder.

Even for someone who spends a lot of time on Twitter, some of the criticism levelled at Thunberg is astonishing. It is, simultaneously, the most vicious and the most fatuous kind of playground bullying. The Australian conservative climate change denier Andrew Bolt called her “deeply disturbed” and “freakishly influential” (the use of “freakish”, we can assume, was not incidental.) The former UKIP funder, Arron Banks, tweeted “Freaking yacht accidents do happen in August” (as above.) Brendan O’Neill of Spiked called her a “millenarian weirdo” (nope, still not incidental) in a piece that referred nastily to her “monotone voice” and “the look of apocalyptic dread in her eyes”.

But who’s the real freak – the activist whose determination has single-handedly started a powerful global movement for change, or the middle-aged man taunting a child with Asperger syndrome from behind the safety of their computer screens?

And that, of course, is the real reason why Greta Thunberg is so triggering. They can’t admit it even to themselves, so they ridicule her instead. But the truth is that they’re afraid of her. The poor dears are terrified of her as an individual, and of what she stands for – youth, determination, change.

She is part of a generation who won’t be cowed. She isn’t about to be shamed into submission by trolls. That’s not actually a look of apocalyptic dread in her eyes. It’s a look that says “you’re not relevant”.

In an age when democracy is under assault, she hints at the emergence of a new kind of power, a convergence of youth, popular protest and irrefutable science

The reason they taunt her with childish insults is because that’s all they’ve got. They’re out of ideas. They can’t dismantle her arguments, because she has science – and David Attenborough – on her side. They can’t win the debate with the persuasive force of their arguments, because these bargain bin cranks trade in jaded cynicism, not youthful passion. They can harangue her with snide tweets and hot take blogposts, but they won’t get a reaction because, frankly, she has bigger worries on her mind.

That’s not to say that we should accept everything Thunberg says without question. She is an idealist who is young enough to see the world in black and white. We need voices like hers. We should listen to what she has to say, without tuning the more moderate voices of dissent out.

Why is Greta Thunberg so triggering? Because of what she represents. In an age when democracy is under assault, she hints at the emergence of a new kind of power, a convergence of youth, popular protest and irrefutable science. And for her loudest detractors, she also represents something else: the sight of their impending obsolescence hurtling towards them.