Why do we spend years accumulating useless things? 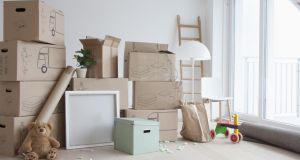 “I’ll just unpack this box, have a glass of wine and watch Hillary take Florida,” I told my husband. “And then I’ll go to bed.”

Three hours later, the wine bottle was empty. The box was not. Hillary had not taken Florida, or Pennsylvania, or Ohio, or the presidency.

I never did make it to bed.

Progress in the nearly three weeks since has been as desultory on the domestic stage as it has been on the world stage. More bottles of wine have been emptied.

One by one, boxes have been opened, resealed, and quietly schlepped off to a storage unit on an industrial estate. On our way there, we pass a sign which declares that my county welcomes Donald Trump as president.

At the storage unit, a former bank manager with kind eyes called Mick unlocks the door.

Tactfully, he says nothing as helps me out of the back of the car with yet another box labelled “J CLOTHES – VINTAGE” or “J SHOES – DRESSY”.

I wonder whether we really need to hold onto the two dining tables, the two couches, the 10-foot sun canopy, the hammock stand, the two portable barbecues, the ice-cream maker with the American voltage, the coffee table made from an old ship’s hatch, the antique writing desk, the book shelf I repainted after I rescued it from the side of the road in Australia, the 244 boxes of books and clothes and toys we shipped home.

I think about it for a moment and decide that yes, we do.

When Mick speaks, it is with the wisdom of a man who spends his days watching people flounder under the weight of the detritus they have spent years accumulating.

“Don’t worry. We’ll find space for it,” he says. “It’s funny. People leave stuff here for years and years and years, and when they finally come for it, it’s to take it to a charity.”

At home that night, as I shove my husband’s only suit to the far side of his wardrobe – to make space for more of my stuff – he wonders whether I actually need it all.

It’s not about need, I insist, reminding him that, for the last five months, I’ve been living out of one suitcase. I’m excellent at living lightly. I could write a book on it. I would, if that Marie Kondo hadn’t got there first.

Anyway, the point is that I did manage to whittle my wardrobe down to the barest essentials: one handbag, one pair of black converse and one pair of winter boots. Three silk blouses, two hoodies, three sweaters, five vests, four dresses. Five pairs of jeans, a leather jacket and a denim jacket. A duck egg blue winter coat I bought in Dunnes a few weeks ago.

I know my husband and tactful Mick are right and that, technically, we don’t need any of the stuff we just spent lots of money shipping across the Atlantic.

Before the container arrived, my husband asked me to name one thing I genuinely missed or needed. Art was all I could come up with. Now our walls are stacked deep with paintings we haven’t got around to hanging, I’m not even so sure about that.

How did we accumulate so much stuff? Why did we ever think we needed it all? I read recently that the average home has 300,000 items in it. Honestly, 244 boxes later, that sounds modest.

Whenever we are confronted with a tricky conundrum or a problem, the solution we have settled on, as a species, is that there must be something that can be procured to solve it.

The incredible thing is not that someone, somewhere, thought, “You know what would be really useful? A yoke for telling you the temperature of the bath without having to get your hand wet.”

It’s that every day, around the world, hundreds of people buy one. There’s probably one in our storage unit somewhere.

Friends have been wondering what it’s like getting all your stuff back after five months. The answer is that it’s a lot of housework.

But, if anyone knows someone who needs a 10-foot sun canopy or an ice-cream maker with US voltage, please drop me a line.