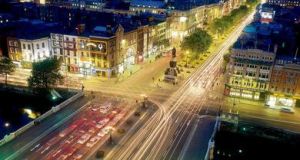 There are great opportunities on the horizon for a generation of Irish people who can harness their creativity.

While our population will be older and our summers much warmer, we will still be popping down to the shop for milk and the newspaper in 40 years’ time, writes STEPHEN KINSELLA

TODAY, WE are as far away from the year 2050 as we are from 1970. Think about the changes we have seen in Irish society from 1970 to today. We are getting older as a society, and there are more of us. The Catholic Church is no longer the cultural and political force it once was; less than half of the people in the country still go to Mass every week, and today only one in four of us wants to see Church-run schools.

Despite our current economic situation, Ireland’s population is vastly wealthier in 2009 than it was in 1970, and this wealth is much more concentrated in the hands of an elite few. We are part of the European Union. We have embraced modern technology, and it extends us: we have the internet, the mobile phone, internet banking, Twitter, blogs, the Crazy Frog ringtone and Britney Spears lip-syncing. It’s a brave new world.

In some respects, we already live in the future that science fiction writers of the 1970s dreamed for us: we live longer, healthier lives, enjoy more free time, experience more opportunities and have more education.

In many other respects, though, we still face many of the same challenges we did in 1970.

Once you look around for hints about the future, you see that Ireland has not changed utterly in the last 40 years. Look just below the surface – you’ll find things just aren’t that different to the way they were in 1970. Think about your car, the town nearest where you live and the main street in that town.

The road you’ll drive on might look a bit better, thanks to advances in material science and liberal applications of EU Structural Funds over more than a decade. The local shop might be a Spar, a Centra or a Londis now. Your car is almost certainly faster, safer, and more fuel-efficient than any car you could have driven in 1970. But you still drive down a road in a car to a shop to buy some milk – and, maybe, the newspaper. The details might have changed but the dynamic remains the same.

Of course life is a bit different for us today. We live longer, are healthier, drink less and enjoy more leisure time than past selves from 1970, but most of us use that increased leisure time to watch more TV than ever before, and as a nation we are starting to see the health effects of increased leisure, decreased exercise, and fattier foods.

Far fewer of us go to church or participate in voluntary organisations connected to the church. Individually, we pay less tax per person than in 1970, but as a nation we pay much more in tax, because there are more of us, and more of us in work.

Today we are in the middle of a population boom; we haven’t seen as many babies born since 1897. Ireland in 2050 asks what their lives might look like in 40 years, when they are middle-aged and have children of their own.

I take the view that technology won’t solve all of their problems, that the pace of technological change really does very little to alter the basic facts of daily life – getting the milk from the shop will be almost the same in 2050 as it is today, and as it was in 1970.

Some things will change. We can see those changes happening or starting to happen now. We can imagine their effects and we can try to plan for what might happen to Irish society, and to an average family, as a result of those effects, both good and bad. Prediction is impossible – I don’t claim to have a crystal ball, but the power of an imagined end, as writer Daniel Taylor says, lies in its ability to influence present choices. Thinking about the future my children might end up experiencing is a way to understand the choices I have to make on their behalf today.

I believe the same is true for Ireland as a nation, and that’s why I wrote Ireland in 2050.

TAKE HEALTHCARE, for example. We know that older people need more healthcare than younger people. We also know there will be many more older people in Ireland by 2050; almost one in every 10 people will be over 80 years of age in 2050, and one in four will be over 65. Compare this to today, where we have only one in 12 people in Ireland over 65. If Ireland wants to continue to provide an approximation of universal health coverage for every person in Ireland, that’s going to get very expensive.

If we start planning for that now, we can avoid a national disaster by saving prudently for this eventuality.

However, it’s going to be great to be old. Rather than being marginalised, older people will constitute the majority of Ireland’s population, and they will be much wealthier than people in their seventies are today. Politics, fashion, culture, research and development and finance will bend to our needs as older consumers. The future’s bright if you live long enough to see it.

Living in the suburbs will be awful. The suburbs created during the recent construction boom will be in need of renovation or demolition in 40 years. Many suburbs were badly built, and built in the wrong places.

The areas that replace the richer suburbs will resemble smaller towns, with flexible working and living spaces. These micro-suburbs will still be recognisably suburban, but they will be within walking distance of many amenities. For example, your house or office is within walking distance of a coffee shop, a pub, a community centre and playground.

So we’ll see another construction boom in the 2020s, as these suburbs are largely replaced. The mathematically grown suburbs in areas that, sadly, don’t prosper, will be left to rot. And life in them will be awful. Services won’t locate there, these areas will be affected by flooding and climate change more, and guess who’ll live there?

Jobs will change, work won’t. The focus for Ireland’s entrepreneurs is on knowledge-work – basically, anything to do with shuffling facts around on a computer. New companies need very little setup, very little maintenance, and can fail or succeed easily. These businesses can be run anywhere – from a home office is ideal – which is where the demand for high quality services closer to home will come from.

The types of services these fledgling firms will provide just can’t be foreseen – so the jobs that end up getting provided by the firms can’t be predicted either, but one thing is certain, they will be different to the types of jobs we have today.

WORK, ON THE other hand, won’t change all that much. We will still have to do it, some of it will still be unpleasant, and Monday mornings will always, always, suck. In terms of demand for labour, however, the children of Ireland’s latest population boom – my kids and yours – will be well placed in the 2030s, and their children will be well placed in the 2050s to take advantage of the drop in numbers of younger workers in other countries like the US, because people there are just having fewer children today.

Our kids will command high wage premia if, and only if, we give them the tools to succeed in this new knowledge economy that doesn’t yet exist. Those tools are creativity and management of complexity, which is why we need, urgently, to kill the Leaving Certificate.

Climate change will both help and hurt us. Ireland’s climate will alter in the next 40 years, and, between coastal erosion, flooding and water shortages, we will likely see changes in the way life is lived.

The leading environmental scientists in Ireland, based at Icarus in NUI Maynooth, project that by 2050, January mean temperatures will increase by 1.5 degrees, and we will see summer temperatures going up by 2.5 degrees. So we’ll have milder winters and warmer summers.

If you’re smiling reading this and thanking God for deliverance from awful summers, don’t. This is not a good thing. This increase in temperature means Ireland will have long, hot summers, averaging 25 degrees in the summer months, and milder, wetter winters, with winter rainfall expected to jump by 10 per cent for the entire country.

Not all regions will experience this change equally over the year. Areas like the northwest of Ireland will see their winter rainfall go up by 20 per cent, while the southwest will see its rainfall decrease by 40 per cent in the summer months. This change in rainfall patterns will have consequences for agriculture. Our current crop and livestock production will be increasingly challenged, and newer modes of agricultural production are going to have to be found. Agriculture is considered one of the sectors most adaptable to changes in climate, and many farmers will prosper by changing their crops and modes of production. However, increased heat, pests, water stress, diseases, and weather extremes will pose adaptation challenges for crop and livestock production.

Don’t worry. The future’s bright. Despite the problems we will face, Ireland and the Irish people are resilient and adaptable to changes foisted upon them, and while the current economic downturn is very severe, and dealing with it is of major public importance, it is also important to remember that this is just a phase.

This too shall pass, and when Ireland does recover from its current economic misfortunes, we will have to face a future I don’t believe we are prepared for. There are great opportunities on the horizon for a generation of Irish people who can harness their creativity, and who aren’t stopped in doing so, who are allowed to produce new things to sell to the world, and who aren’t hindered in their efforts by poor infrastructure or environmental damage.

History matters, and in 40 years, all the decisions we take today will be history. Our children’s range of options and number of choices available to them when they in their turn assume the reins of power will be based on the choices we make for them today.

Ireland in 2050 by Stephen Kinsella is published by Liberties Press. €14.99

Fish sauce: the secret ingredient that makes everything taste better