What the Arctic project is all about and who's involved

The background, what to expect and how you can get involved 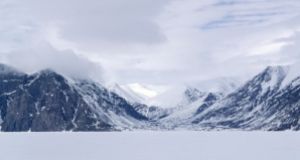 The Arctic – Living at the Top of the World, in which Charlie Bird reports from Canada’s extreme north for The Irish Times , will run for 30 days in print and on irishtimes.com. For the first time, Bird will film, edit and package all his own video, sending it back to Dublin daily. It's a complicated task as the equipment he is using is not designed for such extreme temperatures. despite wearing the best arctic clothing, Bird himself can only spend short periods of time in the outdoors.

Video diary
From today Bird will document his own experiences and those of the people of Grise Fiord. His journey will feature in Weekend Review for the next four weeks, and each weekday he will publish a video diary here on irishtimes.com/arctic.

Education
Grise Fiord has one school, with about 30 students, aged from five to 18. We’ve linked it with an Irish school, Scoil Reált na Mara in Skerries, Co Dublin. They’ll work together to “Challenge Charlie” each week. Communicating by Skype and email, the students of both schools will come up with questions about the Arctic, such as: What does the Arctic sound like? What do polar bears eat? Charlie Bird will investigate and answer their questions on video.

Poster next Wednesday
Next Wednesday we will publish a poster with The Irish Times full of information about Inuit culture, wildlife, oil and energy, and the local population. Additional factsheets and other resources will also be available on irishtimes.com for classroom use.

Competitions
Throughout the month we are encouraging other schools in Ireland to link with the project. We will have two school competitions: a daily online quiz for primary schools starting Monday, and a writing competition with a video angle for secondary level. Keep an eye on irishtimes.com/arctic for details next week.

Stylish activewear: Who said working out had to be a dull?
4

‘Our dream home came on the market... then a nightmare followed’
6

I’ve long given up trying to be cool and aloof. Now I’m an expert at small talk
7