We millennials can be guilty of overtalking, overanalysing, overeverything 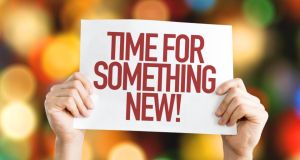 This column has been all about trying new things. Every week I’ve gone in search of a new activity; something that I have never experienced before. I learned to kitesurf, milked a cow, moved in with my dad, pulled a sickie, cycled the greenway and practised mindful eating; and that was just the start.

There was never a problem finding something new to do, as I originally worried there might be. There are swathes of interesting things to spend your time on. The unanticipated problem lay in convincing myself to actually get up off my backside and do them.

Something innate in most Irish people seems to repel newness and risk. I found myself doing all sorts of mind gymnastics to find excuses to avoid the unfamiliar. An exhilarating speedboat lesson was almost missed because I told myself it was too cold out.

One of my best experiences – learning to drive a digger and the subsequent milky tea chats with Gerry – was almost cancelled because of drizzle and a looming deadline. There’s always an excuse if you’re looking for one, especially with our lovely Irish weather. But each week the space in the paper had to be filled, and so each week I pushed myself a little further into the new.

As it so often does, being uncomfortable led to change. I still heard that little voice making excuses, trying to avoid that to which it was unaccustomed. But I noticed the more apprehensive I was about an experience, usually the more I enjoyed it. I’m not going to get all “life lessons” on you; I’m not the first person to step outside her boundaries and learn something. But I will say that conquering life’s small uncomfortables is empowering.

We millennials can be guilty of over-thinking, over-talking and over-analysing. Everything must be weighed, discussed and researched. But sometimes, I have found, it’s better to leap before you look. You’ll probably be grand. And sometimes even the worst-case scenario is a door to something good.

Writing this column has made me brave. So brave in fact, that it has led me on a new journey that will take me away from The Irish Times. My something new this week? A new job. After nearly five years and a lot of learning, it’s time for me to get scared again. Imagine that.”