Warm and gregarious presence at the heart of Galway 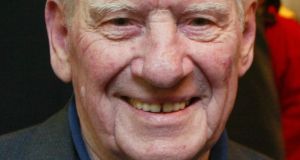 Joseph (Sonny) Molloy, who has died aged 88, was a Galway original, a warm presence over many decades in his draper’s shop in the heart of the city.

He started his working career, aged 15, when he was apprenticed to James Naughton, a shopkeeper in High Street. He later went to work in Brennan’s, but when James Naughton died he was invited back to Naughton’s, an establishment he would be associated with for the rest of his life. He fell in love with and married a daughter of the house, Theresa, known as Teddy, in 1962. Together, they ran the business until they retired in 1997.

Their shop was a jewel in the heart of Galway, a time capsule, a hub of Galway accents and native speakers, a cornucopia of traditional clothing, bales of material, long johns, double-gusset knickers, báiníns, handknit socks, hobnail boots, even canvas for your currach.

We have your size

Much of the business was done with people from Connemara or the Aran Islands. It was all based on trust. He would get a call asking for an outfit for someone on the occasion of their wedding, or for one of the kids making Confirmation.

He would carefully select the clothes, wrap them up in brown paper and string, and deliver the parcel to the Aran boat or the Connemara bus and would be paid later when the customer came into Galway. He never had a bad debt.

Born in 1926, one of six children, his parents, Patrick and Mary Molloy, lived in Woodquay, Galway. He went to the Monastery School and was a keen sportsman in his youth, especially in football and swimming. In 1959, he dived into a raging Galway river to save a struggling 10-year-old boy who had fallen in. He was awarded a certificate of bravery.

He was a famous boy soprano, broadcast on Radio Éireann for the first time in 1940. He packed venues in Galway, took part in many concerts for charity and was a founding member of the Patrician Musical Society and the Galway Baroque singers. He had a wonderful tenor voice, superb delivery and a wide repertoire. He could sing in whispers.

About 70 years ago, he was introduced to the choir in the Augustinian church by the organist Jean Byrne and under her guidance, and later that of organist Pat Lillis, this group built up a formidable reputation.

He always said “You may have all the notes, but you must sing from the heart”. In 1991, he was awarded a papal bene merenti medal for his services to the choir. He continued to sing with them and conduct them up until a few months ago, when he became ill with cancer.

Vacuum in the city

He was a Galway original, a “character”, a people person, gregarious, hilarious, a warm and wonderful presence on High Street. In 1997 he was the subject of a beautiful and sensitive TV documentary entitled Sonny Days, made by Donal Haughey.

He was much loved, but he gave a lot of love too. He was a very good judge of a pint of stout, and managed to have a few of them during his life. A few days before he died in the wonderful care of Galway Hospice he was having a pint of Guinness when the parish priest came in to give him Communion. He was half-way to heaven already, having a pint with his Communion.

He died on December 14th and is survived by his sister, Mary Clare Roche, his in-laws Cecil, Aidan and Doreen Naughton, his nieces and nephews and a very wide circle of friends.