The unstoppable ascent of the Happy Pear

Twins David and Stephen Flynn have built a mini-empire on their healthy eating philosophy. With the upcoming release of their second book, they talk life, food and healthy competition with Una Mullally 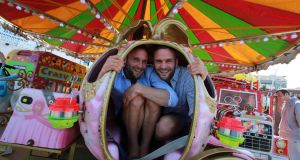 Changing one’s lifestyle in a revelatory manner is one thing, but following that through Happy Pear-style indicates a much deeper passion. Photograph: Nick Bradshaw 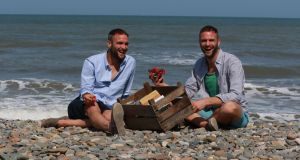 Ireland is definitely becoming more mature about food as a nation, with a greater emphasis on local produce and natural ingredients, but David also thinks there’s a broader search for meaning that is feeding into people’s lifestyles. Photograph: Nick Bradshaw

On the May Bank Holiday Monday, the line to buy food from the Happy Pear in Greystones Co Wicklow stretches about 30 people long out the door. One of the Flynn twins who runs the place emerges with cups of fruit tea for the waiting customers. What began as a vegetable shop in November 2004 has grown into one of the successful natural food brands in Ireland. Stephen and David Flynn embody it. They are all smiles, sea salt skin, matching Toms slip-on shoes, and whole food-fuelled enthusiasm with honed and toned bodies and the calves of someone who cycles the Col du Tourmalet without breaking much of a sweat.

Last week, they arrived in neighbouring Bray with a picnic basket and their new book, The World of the Happy Pear. Their previous book, 2014’s The Happy Pear cookbook, was a bestseller, and this one offers more recipes and an insight into the staff and friends who form the Happy Pear “community”, health tips, and a chapter on healthy food for kids (of which they have two each).

As kids, they were called “cereal killers”, demolishing a bag of Alpen in quick-time. They ate a lot of fruit, namely bananas and apples, but generally grew up on the standard Irish diet; ham and cheese sandwiches, white bread, buying a bag of crisps to put in a sandwich if they had the money. Their mother made flapjacks, which they occasionally bartered for Stinger bars.

The thought of these two guys stuffing themselves with crisp sandwiches and sticks of refined sugar feels very distant to their grinning pictures of grilling courgettes on a barbecue. Their skin is devoid of the unique Irish pallor we’re familiar with, one caused by stress, resentment, and nursing a hangover through seven straight episode of First Dates.

After college, the brothers travelled around Europe – “getting drunk and chasing women”, says Stephen – and signed up to do a marathon.

They were eating poorly and struggling with training: “You were hungover running 15 miles in the sun around Rome.” David says. “It wasn’t that pleasant.”

With a month to the race, they decided to detox, give up alcohol, and eat “as clean” as they could. It worked. The marathon went well, and they decided to try for longer, from the end of October until Christmas. They saved money, felt better physically, had more energy. When it was time to go for pints with the lads, they got the last train home.

“It didn’t feel right to go back down the path we’d always gone,” David says. After Christmas, they went travelling separately and had personal revelations: David in South Africa, giving up meat and taking advantage of the ample fruit and vegetables available at the height of the southern African summer; Stephen in Vancouver, where he met a bunch of guys there who didn’t drink but still seemed to be having a great time, and then a “very cool” vegetarian Australian surfer.

At some point, David recalls his brother phoning him up and saying “do you want to start a health food revolution?” That was that. 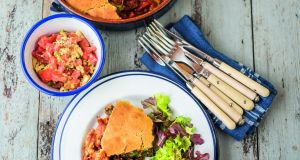 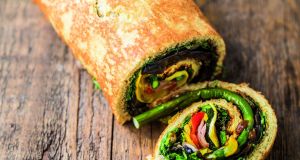 In an amusement arcade in Bray, every game is approached by the twins with enthusiasm and competitiveness. Their energy is contagious. On a carousel, they squeeze unprompted into a tiny pastel pumpkin carriage, entwined as if returning to the womb. Fists are raised and thumbs go up. A whack-a-mole type game with minions from Despicable Me becomes a competition until eventually one twin joins the other’s game and concludes, “We got the high score on that one!”

Outside, eating their own sourdough loaf, they don’t so much finish each other’s sentences as overlap them, clamouring for the verbal space between one and other like hungry chicks in a nest.

Changing one’s lifestyle in a revelatory manner is one thing, but following that through Happy Pear-style indicates a much deeper passion. “It’s not an all-or- nothing type thing,” David says, “Health is a journey, there’s no destination, and there’s no right or wrong. Everyone has their own path to walk, and in our experience, we’ve found our lifestyle, and eating a plant-based diet, a diet that’s based more around health foods to be more advantageous to us, and connect us to things that we previously weren’t really connected to.”

I wonder out loud whether a lifestyle so rooted in health has to be passionate considering most modern societies offer things that aren’t wholesome, that are hedonistic, that are based around consumerism and materialism.

Perhaps if you’re going to be into something that goes against that, you better be really into it. “Yeah,” David says, “because the natural stream of society is going in one direction, and you’re almost going at a countercurrent. I think it does tend to create people who are very passionate.”

The lifestyle they embody chimes well with an era when a large portion of the western world suddenly became gluten intolerant, where raw-food diets, paleo diets, veganism, high-protein and low-carb diets are de rigueur; where displaying one’s strength and fitness across social media is applauded, where a boom in marathon running and triathlons is in full swing; where eating clean reigns, and the previously mundane activities of going for a jog or making some porridge are declared inspirational on Instagram.

Social media thrives on a strange mix of self-obsession, insecurities, bragging and fantasy, and there is a fine line between setting a good example and indulging in that sport. But it’s immediately obvious that while highly marketable, the Flynns’ enthusiasm for a way of life is not an act.

Their Instagram feed is full of swimming at sunrise in Greystones, yoga poses, handstands, and a constant stream of delicious looking food, an endless array of porridge topping variants, with nuts and fruit, granola, berries and nut butter.

Where does the Happy Pear end and Stephen and David begin? “I’d say it’s completely blurred,” David says. “Can I go, can I go? Yeah, it’s completely blurred,” adds Stephen, “We never really had a clear sense of the self because I was called David half my life and Stephen the other half. You learn to not really care. We’re very open, and we’re not concerned about the definition of things. With work, we love it, and it’s such a passion. It’s something that you believe in so much, there’s very little separation. It’s all one.”

Is there a downside to all this healthy living? What about all those five-day juice fasts that doctors give out about, I offer.

“I did a juice fast last week for five days,” David says. Oops.

But doctors do say that a lot of that stuff mightn’t be good for you, right? “Doctors say everything,” David says, “I think you could find proof and validation for just about any kind of way of living at this stage, if you need it. I think that’s all about your belief and your perspective.”

“The first thing is to connect with your frustration, and then from there at least that’s a motivation for change. And then start simple. Start with something that you like,” Stephen says, “eating a kale salad through gritted teeth - that’s not healthy. It might be physically healthy, but emotionally you’re like ‘f*** it.’ Start with where you’re at. Even instead of having corn flakes try to eat porridge.”

David reiterates the “small changes” mantra: “Let go of any ‘perfect’. There is no ‘perfect’ in terms of food, it’s just a series of healthy habits that if you make more of them, you’re going to be more likely to be healthier and as a result hopefully happier.”

Ireland is definitely becoming more mature about food as a nation, with a greater emphasis on local produce and natural ingredients, but David also thinks there’s a broader search for meaning that is feeding into people’s lifestyles, “I think the recession and those kind of things brought people back to community and basics, and realising that food and health and healthy relationships are so fundamental to life, and not necessarily having a third car and a house in Marbella, you know?”

“We don’t believe we have it cracked, that this is it and you’ve got to do what we do,” Stephen says while he stops David interjecting, “Can I finish? We feel really happy and we’re having a great time, and if you’re into it, cool, and if you’re not, that’s cool too.”

You can’t argue with the quality brand, their vision of contributing to a healthier, happier world, their enthusiasm and joy, and you definitely can’t argue with the deliciousness of many of their products. And with the sunlight sparkling on the waves curling around the cliff walk to Greystones, you certainly couldn’t argue with the setting that made them. The World of the Happy Pear is published by Penguin, €24