The Times We Lived In

A nice bit of bling 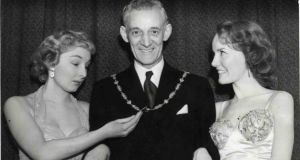 We’re not quite sure why, in November 1952, the Lord Mayor of Dublin allowed himself to be waylaid by a couple of English roses. There must have been an entirely innocent explanation, otherwise he’d hardly have posed for a photo while he was at it.

Here, in any case, is Andy Clarkin with, on the left as we look at the picture, the English stage and film actress Joan Dowling, and on the right, the singer and film star Petula Clark.

Sporting a smile almost as wide as his chain of office, Clarkin looks as if he has won the lottery. He certainly seems to have won the hearts of his gorgeous young female escorts.

Dowling appears to be mesmerised by his medallion while Clark is gazing up at him as if he has just supplied the inspiration for one of the songs which would take her to the top of the singles charts over the coming decades: I Couldn’t Live Without Your Love.

The flirtatiousness of the picture is all the more charming when you read a bit about Clarkin who was, apparently, one of the quiet men of Irish politics. He was a good man to wear a sharp suit, though. Look at that triangular pocket-handkerchief: you could measure its angles with a ruler.

The women’s dresses are a sight for sore eyes. Dowling’s sparkling halterneck and Clark’s glittery embroidered bodice seduce the reader’s eyes in turn, back and forth from one to the other.

What was this mysterious, stylish occasion? One of that year’s big Christmas hits would be Where Did My Snowman Go?, which featured the 20-year-old Clark backed by a choir of children from the Barnardo’s homes; so our photo may well have been taken at a charity fundraiser.

Almost as famous for her cheekbones as she was for her vocal performances, Petula Clark had a lengthy and successful career as a singer. Indeed, having released an acclaimed album, Lost in You, a year or so ago, she’s still going strong at 81. I wonder if she remembers the night she was lost in Mr Mayor?

These and other Irish Times images can be purchased from:
irishtimes.com/photosales