The Sobriety Diaries – week two: ‘I arrive in Donegal gumming for a drink’

A ‘normal Irish drinker’ has quit alcohol for four weeks, to experience life without booze. She’s halfway there 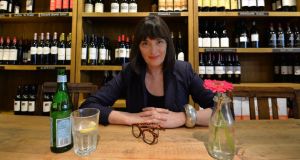 It’s strange when the two of you order nonalcoholic drinks. The barman looks kind of disappointed. Then in the restaurant you send the wine list back and feel that somehow you are failing to come up to expectations. Or perhaps this is projection on my part.

We do get a nice wine cooler for our mineral water, which comes in an unmarked bottle and so presumably was carbonated on site. (I have become slightly obsessed with mineral water.)

During dinner staff and other diners sing happy birthday to five different people in a 90-minute period. I don’t get half as cross as I would if I were drinking.

I’m two weeks into my social experiment of not drinking for a month. I go away for the weekend, and that’s when the desire for drink hits. In the car on the way up I am looking forward to Guinness in shady bars and white wine on the wind-blasted patio of the rented holiday home: of such moments are Irish holidays made.

I arrive in Donegal gumming for a drink. If I weren’t writing these diaries I would certainly cave in. Over the weekend I drink bottles of alcohol-free beer (five) and cups of coffee (innumerable). The pubs in the area vary from cavernous barns to the type of cosy bar with framed photographs of soccer and GAA heroes on the walls, and a girl wearing pink bunny ears at 5pm having a fag and a pint outside the door.

This pub is said to have the best music session on Monday nights, but we decide to stay in and watch a Dolores Keane documentary instead.

It’s the right choice. Dolores Keane, mother of a chronically ill child, is not the only woman in that situation to have experienced a drink problem. On the Soberistas website there are women living without alcohol – or trying to – while caring for sick children, or parents or spouses with dementia.

If you have ever wondered about the human cost of unpaid, unsupported and unacknowledged domestic nursing, then Soberistas is a good place to start. I thought I would be surprised by the youth of the women on soberistas.com, but instead I’m surprised by the number of women in their 50s and 60s on the site. Many of them are grandmothers.

For at least one of them, going alcohol-free led to her being allowed to mind her grandson overnight; her daughter had not trusted her to do that before.

According to Lucy Rocca, who started the Soberistas website, in the UK it is the over-65s who are presenting most with alcohol-related problems. “It is harder for them, because you’ve not got the restrictions in your life,” she says. “You’ve not a full-time job, maybe, or small kids.”

Many people, both male and female, find that their drinking really takes off when they retire. According to Rocca, there is a lot of unreported depression in this group as well. But they are fighters. To read about the woman who takes such pleasure in making time to go to her choir practice, as well as caring for her demented husband, and has not had a drink in many months, is chastening.

These older carers are the people who both drink and cope; no one wants to know how they manage that. In situations like these it can be useful to define problem drinking more broadly.

This new model recognises problems that were not considered serious enough before, says Rocca. “And it is serious. Just because the effects of drinking are not earth-shattering doesn’t mean it’s not serious.”

Rocca’s problems before she gave up alcohol included “a crap job, low self-esteem, not-great relationships”. She never lost a job; her daughter was not taken into care. Yet it took giving up drinking “for everything to turn around” for her.

Chris Raine, who five years ago started the Hello Sunday Morning website to encourage people to examine their drinking, agrees that for many people drinking is not a black-and-white situation. “Rather than a bingeing culture, in reality it’s a huge spectrum.” If he could change one thing about the public attitude to alcohol, he says, it would be that “we see alcohol as a drug”.

Raine, who is Australian, started Hello Sunday Morning when he was just 22. He is currently in the UK, doing an MBA at Oxford. His study includes a method of calculating the financial benefits to a government of its population reducing its alcohol intake. He has already worked with the governments of Queensland, Victoria and Western Australia.

Raine sees that England, Ireland and his native Australia have what he calls a shared drinking culture. “If the goal is for us to drink for all our lives, then we have to find a point of moderation.”

He took a year off alcohol five years ago. “It was the best thing I ever did for myself,” he says. In that time he started Hello Sunday Morning.

Raine now drinks, but more consciously. “I finished the 12 months alcohol-free and I didn’t drink the first night. Then I went back drinking much, much less. There were times I had one too many, but that would be five or six drinks, not 10 drinks. My body’s not attuned to it. And every year I take three months off.”

We handle our drinking in different ways. Like the woman who almost bumped into me while coming around the corner last week and cried out, “Oh no, I’ve had two glasses of wine!”

Enjoy your glasses of wine, I say. What we need is a much wider conversation about drinking, one conducted without guilt or the fear of being found out.