The Question: Are university rankings bad for students?

International league tables may sound comprehensive, but it's unclear how they help students 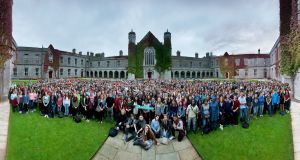 Grim reading: NUI Galway was the only Irish third-level institution not to fall in the QS World University Rankings 2016-17

The latest set of international university rankings were grim reading for Irish universities. With the exception of NUI Galway, they all fell in the QS World University Rankings 2016-17. Only Trinity College Dublin remains in the top 100, albeit 20 places lower than last year.

University heads were quick to ascribe the precipitous drops to a decade of funding cuts, noting that Ireland is 29th of 32 OECD countries in expenditure on third-level institutions per student relative to GDP. Funding for the sector is currently about €940 million, which must be the best value for a billion the country spends every year.

How accurately do these rankings serve students? Their definitive-sounding nature masks the inherent messiness of such an endeavour: assessing one university’s excellence in comparison with others, particularly those in countries with different pedagogical cultures, makes comparing apples and oranges seem easy.

In a piece in Village magazine earlier this year the Dublin City University political scientist Eoin O’Malley pointed out many of the problems inherent in these university rankings. The main ones, such as the QS, Times Higher Education and Shanghai rankings, put a big emphasis on a university’s reputation, a vague and subjective measure.

O’Malley also notes that “teaching itself is remarkably difficult to measure”.

The main problem, however, may be that the relatively recent rise of such university rankings has created a distorting metric, diverting universities from addressing the needs of their students and academics to focusing on the sometimes arbitrary criteria of these rankings.

As O’Malley reminds us, citing Goodhart’s law, “when a measure becomes a target, it ceases to be a good measure”.

Certainly, the furore about the rankings will put some pressure on the Government to address funding deficiencies. If those are handled with some urgency in the coming years, then students will benefit.

In that sense the rankings serve students less by inspiring universities to reach a range of international targets than by acting as leverage to ensure adequate funding.