The ‘kink-shaming’ of Donald Trump reeks of hypocrisy

Amid allegations of ‘golden showers’, where’s the tolerance for other people’s sex lives? 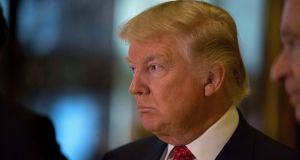 Twitter has long been an arena for the theatre of public shaming, and US president-elect Donald Trump is no stranger to the business end of Twitter’s gleeful spearings.

But this week saw things move into unprecedented territory for any president-elect. As allegations – as yet unverified – surfaced that Trump paid prostitutes to perform a golden shower (urination) show in front of him in a Russian hotel, Twitter went into overdrive.

The hashtag #goldenshowergate was soon trending, #Trumpfilms were clogging timelines (Never been P*ssed, Waterworld, you name it), and the memes were generally coming thick and fast. The kink-shaming could be heard around the world.

So far, so entertaining, except that many of Trump’s detractors – often referred to as members of the metropolitan, liberal, feminist elite – are, in the main, a rather sex-positive bunch.

Many of them will gladly defend a person’s right to whatever kind of sex life they prefer to practise. Many of those who baulk at Trump’s racism, sexism and generally bigoted carry-on are a live-and-let-live, progressive bunch who wouldn’t bat an eyelid at a person’s decision to buy a sex worker, go to an S&M club, or have an otherwise diverse and colourful sex life beyond heteronormative norms.

Could it be that, on the spectrum of kink, an alleged golden shower is a bridge too far? Or is this all just merely an excuse for some gleeful Trump-baiting? Is it because this particular (alleged) sex act seems to fly in the face of Trump’s overbearing machismo? Is it because kink in a wider sense is in some way often related to one’s views on power roles in everyday life? Or a little from each column?

Intelligence agencies should never have allowed this fake news to "leak" into the public. One last shot at me.Are we living in Nazi Germany?

Russia has never tried to use leverage over me. I HAVE NOTHING TO DO WITH RUSSIA - NO DEALS, NO LOANS, NO NOTHING!

There is much lip-service devoted to tolerance, broadmindedness and the doing away of petty judgments. Surely this should extend to people’s sex lives as well?

I’m certainly no fan of Trump, but I couldn’t help but find this week’s Twitter spectacle unedifying. Genuinely, I never thought I’d see the day where I would defend Trump on anything, and yet here we are.

The ripple of gloating schadenfreude in light of these reports reeked of parochial smugness. It was a throwback to a time when tabloid kink-shaming was commonplace; when those who engaged in any sex act beyond the heterosexual missionary position were seen as terrible, evil, perverted people. Do we really want to go back there?

Humans have long looked down on certain sexual interests, and, according to a report in Psychology Today, people have sex within the limits of their sexual development. We stick to having sex in familiar ways that keep us comfortable. Having sex beyond our sexual development creates anxiety and makes us nervous.

As a rule, I’m okay with people doing pretty much whatever they want sexually with consenting adults. Kinks are a natural form of sexual expression for many people. And we need to move away from this flavour-free, heteronormative relationship model, because there are plenty who don’t fit into it.

I’ve interviewed polyamorists, asexual people, fetishists, fantasists, or people who routinely buy the services of sex workers. In a society that often finds their lifestyle choices questionable, they have spoken of their sexuality with articulacy, intelligence and conviction.

Often, it’s troublesome for them to admit they have sexual interests or preferences outside the cultural norms. And through these conversations, it’s become clear that the kink does not maketh the man.

It does not constitute a moral glitch. It’s often a small part of an otherwise rounded life and personality.

I’ve no interest in golden showers personally, but I’ve even less interest in policing people’s sexual preferences or behaviours. And if we are hoping to build a nicer, more tolerant society, perhaps this is the direction we should be edging towards, not cackling when someone is reported to have been caught with their trousers down.

Trump appears to be less than impressed that such unverified claims have surfaced. “FAKE NEWS – A TOTAL POLITICAL WITCH HUNT!” he tweeted. At the very least, Trump can take solace in the fact that #goldenshowergate isn’t likely to put a crimp in his reputation in the long term. After he mocked a reporter with a disability in November and those infamous “grab the pussy” remarks, one thing is clear: no matter what allegations and stories surface, you can’t keep a great – or even a not-so-great – man down for long.