The Irishman chasing a one-way ticket to Mars

Space exploration company Mars One has shortlisted 705 people to travel to Mars. Joseph Roche is the only Irish man on the list. The catch? If he goes, he can never come back 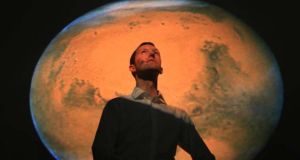 Dr Joseph Roche, who is hoping to go to Mars, pictured in the Science Gallery Dublin with a projection of Mars. Photograph: Nick Bradshaw

He has been whittled down to the final 705 out of 200,000 hopeful candidates for Mars One, a Dutch not-for-profit group hoping to beat a number of government space agencies to send 300 people to live on Mars.

What did you want to be when you grew up?
I have never dreamed of being an astronaut. When I was a child, there was no job that I could imagine an older, future version of myself doing for the rest of my life. There were times when I wanted to be an artist or a palaeontologist or a farmer. My eternally patient parents advised me to pursue my interests rather than trying to follow a specific career path.

How did you hear about the Mars One mission, and what made you apply?
I heard about Mars One after finishing my PhD when I started working full-time for Science Gallery as their education and learning manager.

The Mars One Foundation declared that if the challenges associated with the return leg of a potential manned-mission to Mars were removed then they could get send people to Mars much sooner than anyone had expected.

This was the first time the world had heard of a one-way mission to Mars. Mars One also announced that they needed volunteers for the mission and I knew immediately that I was going to be one of them.

After spending more than a decade trying to understand our place in the universe, I could never turn down the opportunity to be one of the first interplanetary scientists.

What did your friends and family think of the prospect of a one-way trip to Mars?
They weren’t surprised when I volunteered. The likelihood of me being selected is quite small and the mission itself faces a number of obstacles that we hope can be overcome but could scupper my chances at any stage.

My family members are very rational and would never worry about such a drastic scenario as my leaving the planet unless it began to look likely.

What has the application process been like so far?
Fairly straightforward. I had to fill out an application form and do a short video. More than 200,000 people volunteered and after Mars One chose just over 1,000 candidates to progress to the second round of the selection process they invited us to undertake some basic medical examinations to ensure we are physically capable of the trip at present.

After the tests, 705 of us were selected to be interviewed. The interviews will take place over the months ahead and a small group of candidates will then be picked to start eight years of astronaut training.

What do you anticipate life on Mars to be like?
Mars One has designed the mission using only existing technology that already works on Earth. It would have life-support modules that reclaim water from the soil and create a breathable atmosphere inside an inflatable living component covered with several metres of Martian soil to protect the inhabitants from radiation. Some of the Mars One mission training takes place in Antarctica, to simulate the isolation the astronauts would have to endure on Mars. Food would consist of plants, algae and mushrooms; all of which we can be produced with little maintenance.

Communication with Earth would be possible through a satellite in Martian orbit. A three-and-a-half minute delay in communications would rule out any live conversations but the colonists would have access to internet and could keep in touch with loved ones through video messages, email, and SMS. We wouldn’t have as much freedom as some people indicate; there’s already a strict ‘space law’ in place. People have asked me things like, “how will you have a funeral?” but in all likelihood, I won’t have a say in something like that. That’ll be something already agreed upon by others.

How does the prospect of living on Mars impact your life here on Earth?
I see my involvement with Mars One as an exciting hobby that I’m honoured to have. I am sure my friends, family and colleagues are tired of hearing me speaking about it an,d as a consequence, I do not mention it anymore unless people explicitly ask me to speak about it.

I find it endlessly fascinating and I think I always will, regardless of my involvement in the mission, but I do not think it should define me. For the moment I love being a scientist on Earth and I’m firmly concentrating on my life here.

Friends and family aside, what would you miss most about life here?
The smart answer? A breathable atmosphere, and things like weather and nature. Philosophically, I will miss having humankind around too. We’re a social species, after all.

What music would you bring to Mars?
Top of my album list would be Gojira From Mars to Sirius. I adore this album and it would be perfect for a trip to Mars. It’s a concept album about interstellar space travel but it also reminds us, in brutal fashion, why the Earth is worth fighting for and sometimes worth dying for.

The second album would be Metallica, Master of Puppets. Metallica has been my favourite band since I was six years old, and I wouldn’t leave any planet without them. I could imagine that if things got bad on Mars I would listen to Orion and that would get me through.

The final album I would bring is Mastodon, Crack the Skye. I believe there are better Mastodon albums but this is the only one that deals loosely with the concepts of space travel, physics and facing oblivion.